The Re-creation of Repoussé, A New Technique by Michael Izrael Galmer 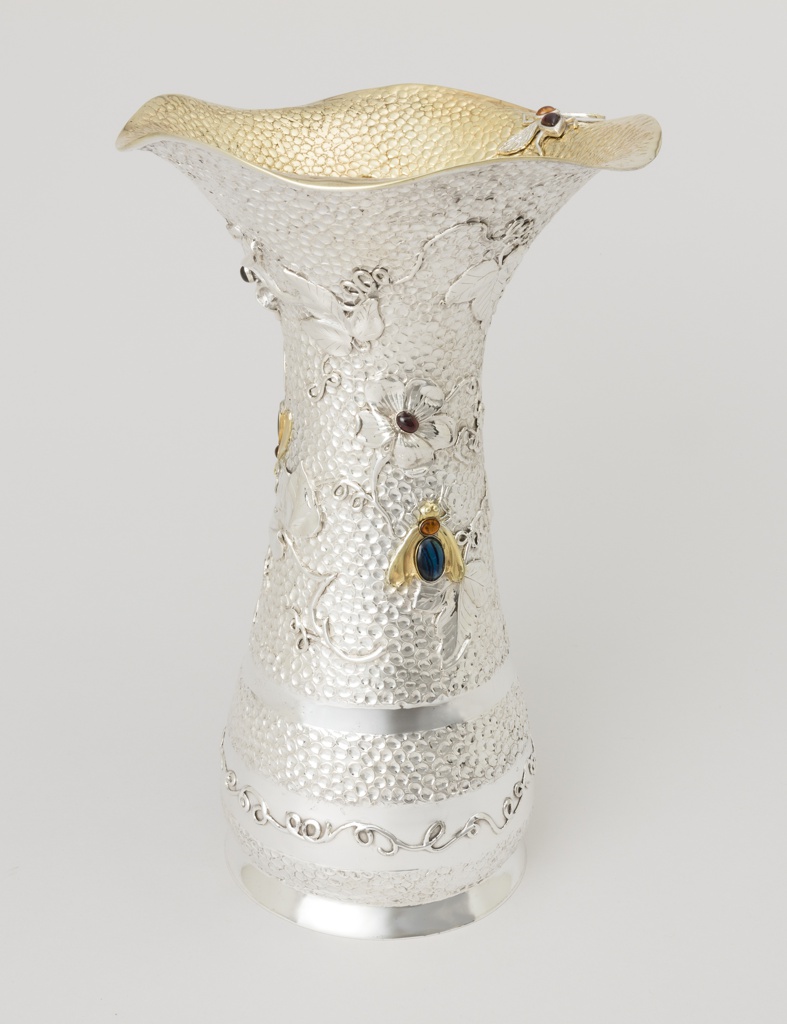 Michael Izrael Galmer was born in 1947 in the former Soviet Union, living there through much of the Cold War. Despite the difficulty of these years, Galmer attended Moscow University, earning a Ph.D. in physics while pursuing his interests in drawing, painting and sculpture, looking to nature for inspiration. As a student, he did not limit himself to fine art, and often took time to study applied arts like metalworking.

By 1980, Galmer was looking to immigrate to the United States, and in 1981 he and his wife, Galina, started Galmer Siversmiths in Long Island City, New York. By 1983 Tiffany was interested in his work, and they entered into a rare, non-exclusive relationship. This allowed Galmer to associate himself with other firms like Gorham, Stieff and Lennox. His career blossomed and he received many prestigious commissions.

Through careful observation of nature and the materials used, Galmer develops concept drawings that he thinks will suit both his ideas and observations. He then chooses one to develop further, in this case a vase with applied bees and flowers. He then makes a clay mold, on which he applies the general decorative work before doing a negative and positive in rubber-coated plastic, which he builds up and creates a model on which to work further.

To create the repoussé effect he punches the model with a silver punch and then creates a silver model on which he applies smaller elements like leaves or floral pieces. He then finishes the master example and creates his final mold in resin, as well as separate models for the applied bees. When the cast silver vase is unmolded it is gilded and finished with applied bees and set with semi-precious stones like, amber and garnet for a touch of color.

This silver vase and its associated drawings, mold and model are indicative of the detailed creative process that Michael Galmer goes through to create his magnificent works of art and design. His work, as demonstrated on this vase, features the handwork that replicates the dimpled surface of classic repoussé, normally achieved by hammering on the reverse side. Galmer achieves his effect through advanced casting techniques combined with traditional handwork such as chasing, resulting in a detailed relief similar to actual repoussé. The repoussé on Galmer’s works is reminiscent of pieces associated with Samuel Kirk of Baltimore and his followers in the mid-nineteenth and twentieth centuries. The Tall Bee vase also has the spirit of Japonisme that Tiffany and other major firms made so popular in Europe and American in the late 1870s and 1880s without being an exact replica. At the same time touches of early twentieth century Art Nouveau, the free flowing lines, the focus on nature, are also apparent. In the end, the vase is a modern amalgam of decorative styles, artistic techniques, and creative vision.

The Tall Bee Vase is currently on view in Making | Breaking: New Arrivals. The exhibition opens today Friday May 19th and continues through October 29th.

Susan Teichman is a Design Historian whose areas of focus are Jewelry History and the Architectural History of Synagogues.

← Subtle but Strong
Symbols of Faith →

One thought on “The Re-creation of Repoussé, A New Technique by Michael Izrael Galmer”

Mr. Galmer displayed his work in Dover, Delaware. It was spectacular. I

was grateful that he explained the meaning of his work. I would like to

suggest a sculpture to show the effects of global warming. I spoke to

although I’m not Jewish. It was an emotional moment.