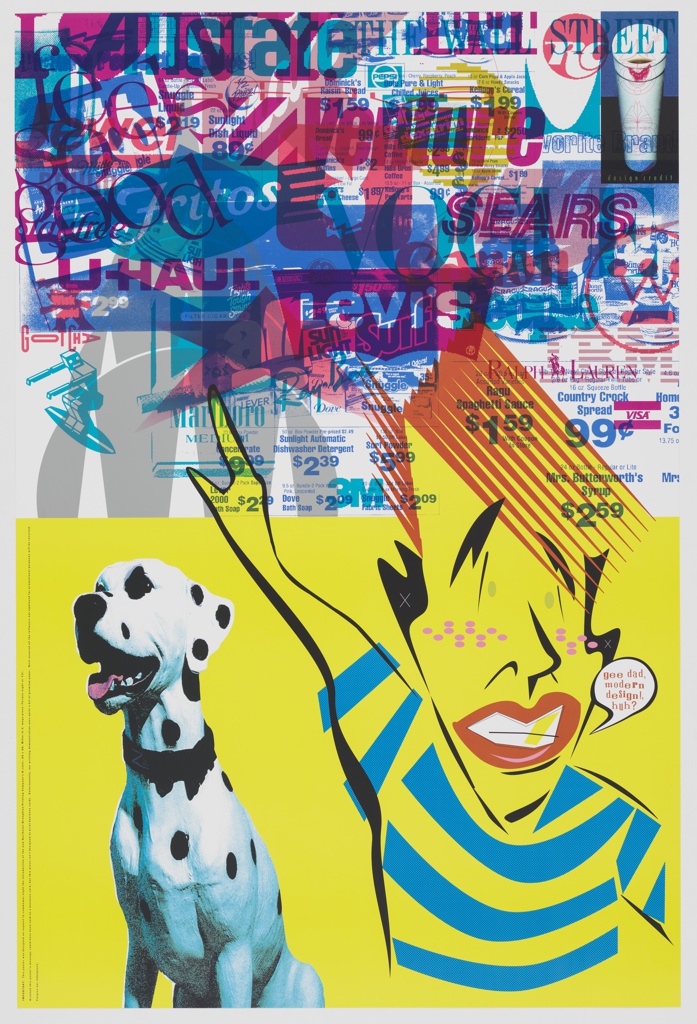 This poster by graphic designer Rick Valicenti is loaded with iconic commercial imagery. In 1994, Valicenti received the commission to design a poster introducing the Northstar and Broughton Printing Company’s new eight-color press. His resulting design is at once an advertisement for the new press as well as a provocation that questions the role of graphic design in a media-saturated culture. Instead of a single poster, Valicenti produced a series of eight posters entitled “gee dad, modern design, huh?,” three of which were recently acquired by Cooper Hewitt’s Drawings, Prints & Graphic Design collection. The posters all share the same essential figures in the lower composition—the caricature of the red-haired boy at lower right and his accompanying Dalmatian evoke a particular mid-century American idealism, referring to characters of popular comic books and family television programs such as Leave it to Beaver. The upper half of the composition, however, becomes increasingly crowded with corporate logos and graphic identities, some clearly recognizable and others more obscure. By the end of the series, the layers of logos have created an indistinguishable mass of red and blue. The gesture of the boy to these commercial images as well as his speech bubble containing the title of the series suggest that the poster is both participating in modern commercial design as well as critiquing it.

Though the content of the poster obviously features advertising, the advertising intentions of the poster are much less conspicuous. The explanation of the new printing process appears in tiny black text along the poster’s lower left side, dwarfed by the design’s vibrant imagery. After explicitly explaining the commission that created the poster, the text continues the tongue-in-cheek spirit of the design: “Granted this poster’s message could have been said on a business card, but this press isn’t designed to print business cards. Unfortunately, our printing demonstration uses quite a bit of premium paper. Rest assured all the leftovers not employed for promotional purposes will be recycled. Forgive our indulgence.” Even though the explicit advertising message is secondary to the poster’s imagery, Valicenti’s design itself serves as the real advertisement. The subtle nuances in the layers of color and form of the many logos demonstrates the potential of this new printing press to create dynamic, vibrant, and complex images.

Julie Pastor is Research Cataloguer in the Department of Drawings, Prints & Graphic Design.

← A Glass Palace Fit For A Bird
Lost Urban Theatres →