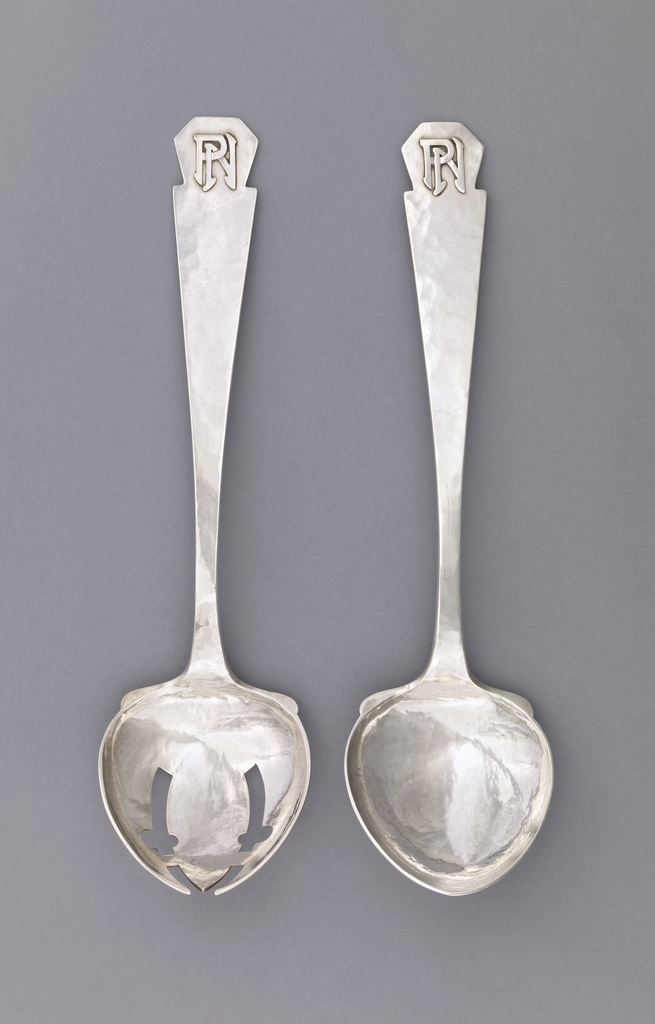 Founded by Clara Barck Welles in 1900, the Kalo Shop was one of the most successful workshops of the Arts and Crafts movement. The name “Kalo” derives from the Greek word for beauty and the motto of the Kalo Shop was “Beautiful, Useful, and Enduring.”[1] The output of the Kalo Shop lived up to this maxim, and its design hallmarks included the use of simplified forms and the integration of semi-precious stones. The Kalo Shop created a wide variety of often custom-made silver hollowware that ranged from flatware to milk jugs, in addition to a significant output of jewelry.

It is interesting to note that while the designers of Kalo were women, Welles hired men (many of whom were Scandinavian immigrants) to work and chase the silver hollowware. Though women were active in the Arts and Crafts movement in America and contributed enormously to the field of craft, there was still a gendered division of labor in many of the workshops.[2] Women more often produced textiles and jewelry, in addition to painting ceramics, whereas men took on work that would be considered more masculine, like forming silver and throwing pottery.

Following the Industrial Revolution, machine-made objects overtook markets. Founder of the Arts and Crafts movement William Morris lamented these machine-made goods, finding them lacking in the soul and creativity of the artisan. Morris advocated for a return to handmade objects, as he felt that such handicrafts would give happiness to those that created and used them.

This salad serving set reflects the goals of the Arts and Crafts movement, in that both pieces exhibit a planished surface with visible hand-hammered marks. The markings on the back of the two pieces proudly proclaim that they were “Hand Beaten,” further emphasizing (as well as marketing) the retention of the artist’s hand. The date can be confirmed by the rare mark of “Hand Beaten,” which was added to objects around 1910. The mark was later dropped in 1914 in favor of “Handwrought.” Furthermore, although the essential form of these two pieces is the same, the fork is subtly distinguished through artistically-cut slits. Unlike many of the workshops of the Arts and Crafts movement that faltered and closed, the Kalo Shop remained open well into the 1970s, creating pieces that were as beautiful as they were useful for over 50 years.