A Wall of Calligraphy 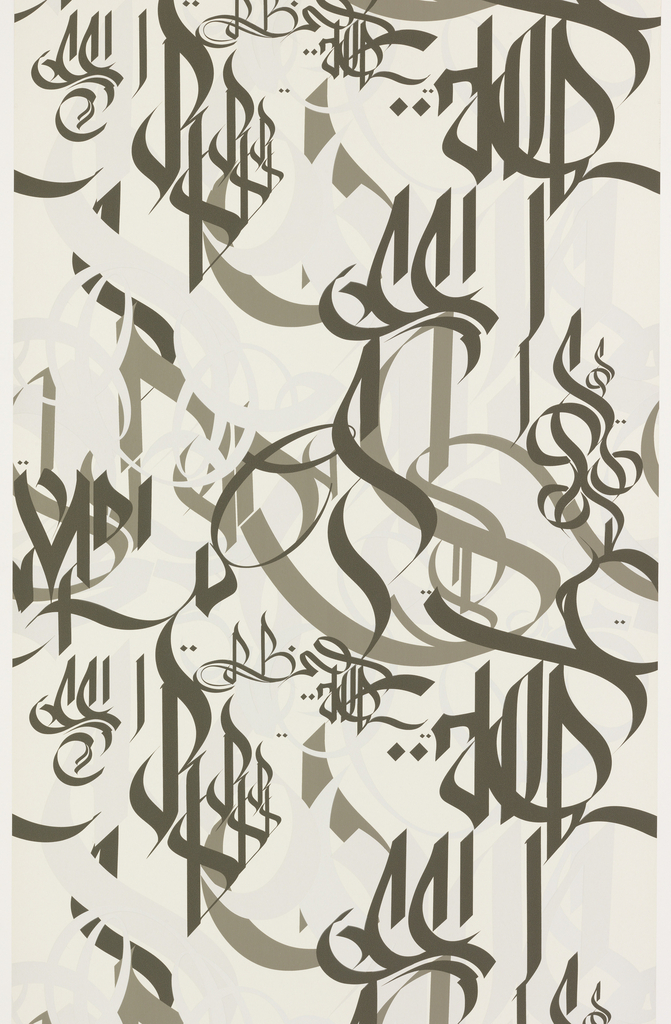 In this beautiful sidewall, layers of white, dark brown, and tan lines swirl into compositions reminiscent of chopped-up calligraphy. No words seem to be spelled out, and stylistically the calligraphy hovers between Arabic and Gothic scripts. The layering of the “words” in the paper causes us to see them primarily as ornamental forms, leading us to appreciate the sheer beauty of the line work, but it also reminds one of the visual chaos of a heavily-graffitied wall with its layers of tags. The paper thus is not only visually delightful but blends the seemingly disparate arts of medieval calligraphy and contemporary graffiti.

The designer Javier Gutierrez is better known as Inocuo and is a world-famous graffiti artist besides being a graphic designer. In 2002 he co-founded the design studio InocuotheSign with David Fernández, a graphic designer and illustrator. The studio is based in Barcelona. At the time this paper was donated the studio team also included Txema Alguacil, an illustrator and former advertising agency art director. Though Alguacil has since left, the studio has grown to include six individuals in total. Alongside Gutierrez and Fernandez there is graphic designer Alberto Domínguez, graphic and motion designer Pol Vila, and the producers Albert Casanovas and Miriam Romero, whose experiences include film, music video, and motion graphics production.

Besides illustrations for album covers, poster design, and branding, they studio has moved into designing motion graphics and 3d graphics as well. They have worked for such companies as Coca-Cola, Audi, Nike, and Sony, but they also work often with small local companies. One thing that stands out in their work is the creativity of their lettering, an often prominent feature of their work. Some great projects that demonstrate this talent is their proposal for the 2013 FINA World Championship logo, their promotional t-shirt designs for the recording artist Lírico, and their poster designs for the El Barroc music festival in Barcelona. Gutierrez also continues to do street art, his most recent work being a mural in Barcelona created in 2013 with the artists Kram and Nados of the Catalan writers Salvador Espriu and Mercè Rodoreda. The mural, called BCNWALLWRITERS, features calligraphy prominently. As these projects and this sidewall indicate, Inocuo and InocuotheSign is certainly one of the best design studios working with calligraphy and type today.

Nicholas Lopes is a student in the History of Design & Curatorial Studies graduate program at Cooper Hewitt, and is a Master’s Fellow in the Wallcoverings Department.

← Let There Be Light: Table Candlestand
Metals and Materials →