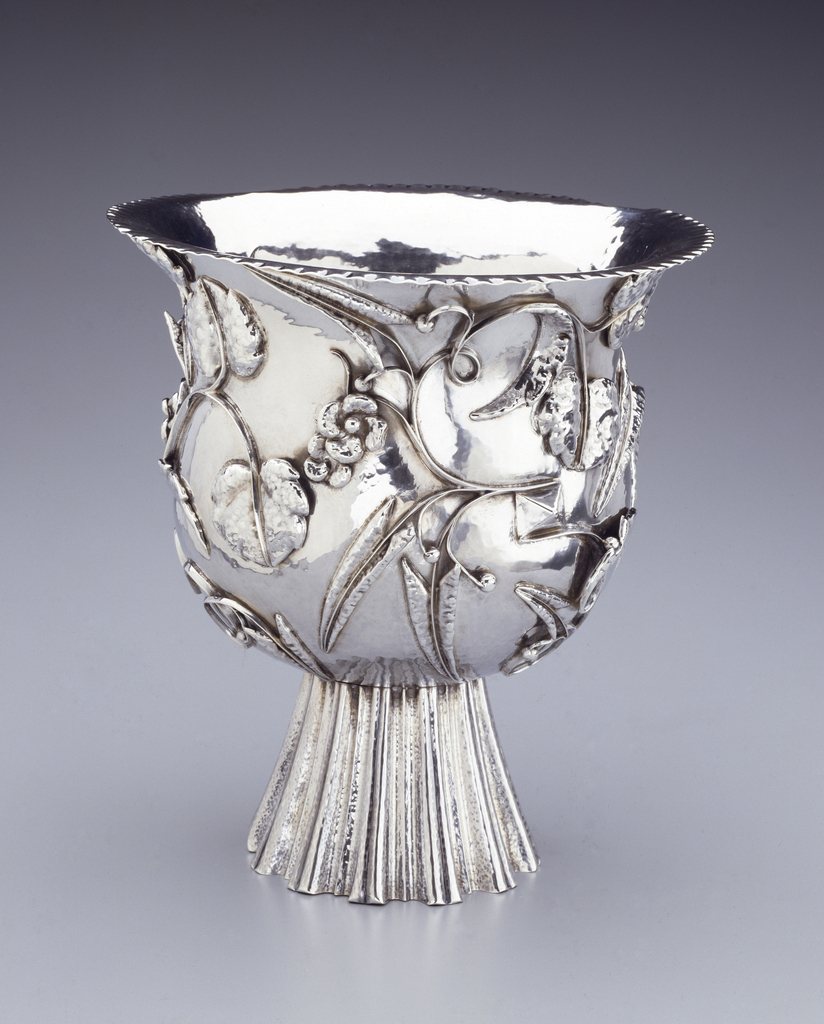 Formed in the spirit of William Morris and the Arts and Crafts movement in England, the Wiener Werkstätte strove to make handmade objects of the highest level of craftsmanship. Lead by designers Josef Hoffmann and Koloman Moser, and financially backed by their patron, Fritz Wärndorfer, the Wiener Werkstätte formally opened its doors in 1903. This workshop sought to reinvent the field of decorative arts in Vienna by creating objects that were as beautiful as they were useful. As stated in their Working Programme, the Wiener Werkstätte sought to “establish an intimate connection between public, designer, and craftsman, and to produce good, simple, domestic requisites.” [1] Hoffmann and Moser tended to favor geometric forms and many works by these two designers feature the use of geometric latticework or checkboard patterning.

Dagobert Peche joined the Wiener Werkstätte as their artistic director in 1915. Peche’s style was one of playful exuberance, and his designs often feature putti, sinuous curves, and bright and colorful patterning. Peche’s work for the Wiener Werkstätte included jewelry, textiles, and posters, many of which currently rest in the Cooper Hewitt’s collection. This vase was purchased from the New York Wiener Werkstätte shop during its brief existence, by Ely Jacques Kahn, a New York architect who designed some important skyscrapers in the late 1920s and early 1930s. Kahn later gave the vase to Cooper Hewitt.

Peche’s designs were inspired by the Rococo and Baroque movements, in addition to traditional folk art. In contrast to the earlier and more geometric output of the Wiener Werkstätte, this vase is an explosion of movement and life. A flowing vine with both arrow-shaped and rounded leaves grows over the surface of the vase. The vine patterned, globular body is juxtaposed against the straight lines of the carved and fluted foot. A true expression of Peche’s imagination, this vase demonstrates a move into whimsicality for the Wiener Werkstätte.

This vase and a selection of other objects by Dagobert Peche are currently on view in The Jazz Age: American Style in the 1920s through August 20, 2017.

Elizabeth Muir is a graduate student in the History of Design and Curatorial Studies program at Cooper Hewitt, and is a Fellow in the Product Design and Decorative Arts Department. She is primarily interested in 20th century design and decorative arts.