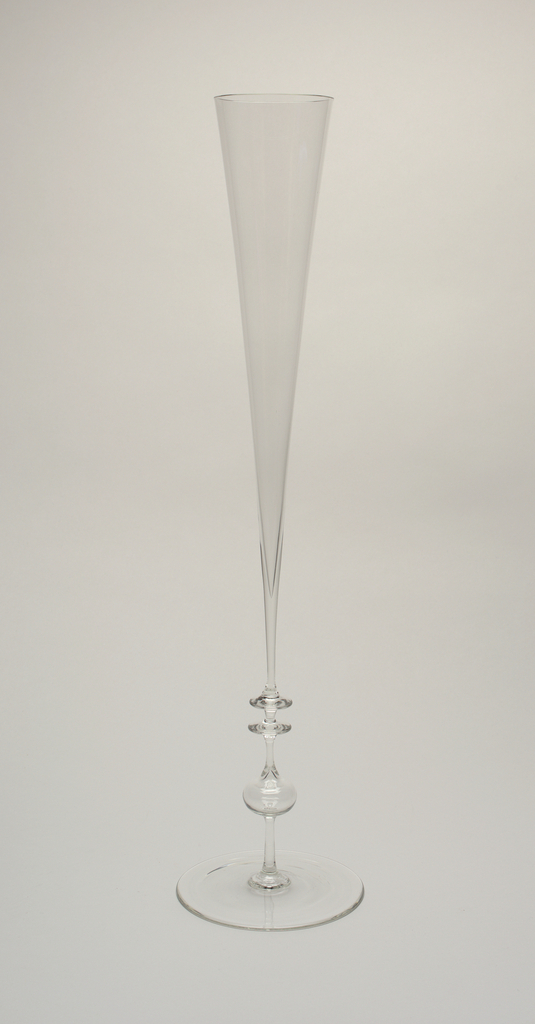 This Ambassador vase was displayed at the Paris Exposition of 1925 by the Viennese glass firm Lobmeyr. The full title of the Paris Exposition was “The International Exhibition of Modern Decorative and Industrial Arts of 1925,” and the show aided the dissemination of both handcrafted and machine-made decorative arts. It introduced designers like Robert Mallet-Stevens, Josef Hoffmann, Émile-Jacques Ruhlmann, and Louis Cartier to a world stage and popularized their designs. The Ambassador collection of glassware was designed by the Viennese designer and architect Oswald Haerdtl. Haerdtl was an Austrian designer who worked closely with Josef Hoffmann and Josef Frank during his career. While Haerdtl created this luxurious Ambassador line, which could only be afforded by the wealthy, throughout his life, Haerdtl championed the development of affordable and popular designs.[1]

At the Paris Exposition the Ambassador line of glass the caught the eye of American collector Agnes Miles Carpenter, who commissioned a set of glassware from Lobmeyr. Lobmeyr sent life-sized design drawings to Carpenter in New York for her approval. This vase was likely used in the dining room of Carpenter’s Fifth Avenue New York apartment, which was designed by Jules Buoy, a New York cabinetmaker who was fully versed in the newly fashionable “Style Moderne” that came from Paris.[2]

The clear, almost transparent nature of this vase is the result of a glass-making process known as “muslin glass.” Making this type of crystal required a highly experienced glassblower, as it has a high workmanship of risk, meaning, a likely chance of breakage. First, the glass was carefully blown into a wet wooden mold. The resulting steam from the wet wood lead to a protective pad of air that gave this muslin glass its sheen. The delicate details on the foot of the vase were free-blown and attached by the glassblower, and then the glass was finally polished to give it its incredible lucidity.

Elizabeth Muir is a graduate student in the History of Design and Curatorial Studies program at Cooper Hewitt, and is a Fellow in the Product Design and Decorative Arts Department. She is primarily interested in 20th-century design and decorative arts.