In the last Cooper Hewitt Short Story, we tweeted about birdcages and their passionate collector, Alexander Drake. April’s Short Story—by Stephen Van Dyk, Head Librarian at Cooper Hewitt, Smithsonian Design Library—confronts birds and beasts not confined to cages, but rather fantastical interiors and the illustrated pages of library books.

“Strange beasts and fabulous birds appear at his beck and call,” reported the 1922 publication that accompanied an exhibition of Robert Winthrop Chanler’s work. About his persona, the publication continued, “Chanler, as a personality, has stoutly resisted that process of standardization which renders so many of us mere pitiful examples of quantity production.” And so characterized the fascinating life and boundary-blurring work of this eccentric artist.

Robert Winthrop Chanler, ca. 1900 and then again shortly before his death in 1930.

Robert Winthrop Chanler (1872–1930) was a big man. He was 6’4” tall and over 200 pounds with an extravagant, passionate personality. His fellow artist, Guy Pene du Bois, described him as a furious bull in a china closet. His book collection, now at the Cooper Hewitt Museum of Design Library, reflects this. The collection runs the gamut of wide ranging subjects from sea voyages to stagecoaches to lettering to Greek and Roman vases. However, his collection of books on flora and fauna is the real treasure of his bequest. 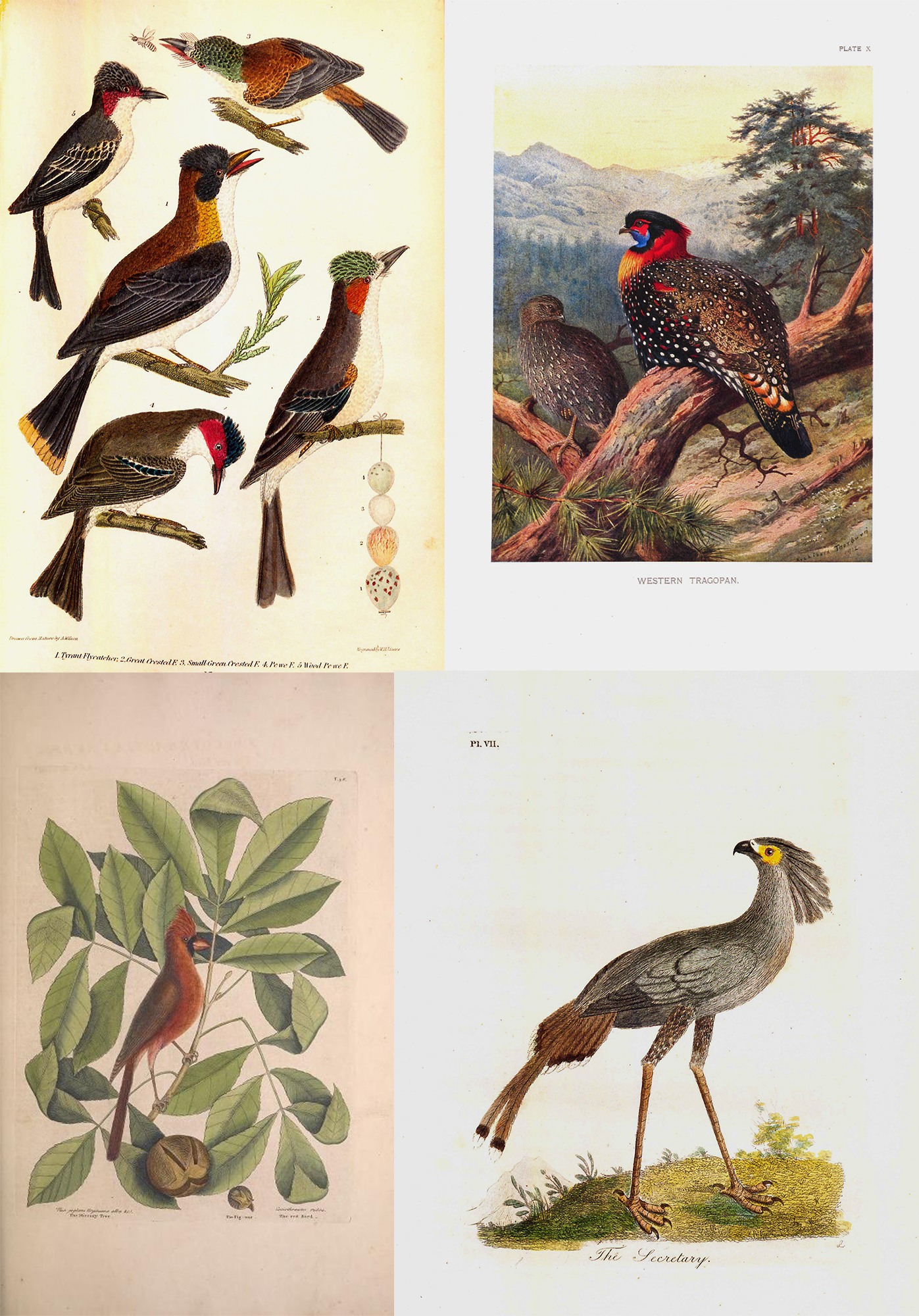 (upper left) American ornithology, or, The natural history of the birds of the United States by Alexander Wilson, with a continuation by Charles Lucian Bonaparte, prince of Musignano. The illustrative notes, and life of Wilson, by Sir William Jardine, Bart. F.R.S.E. F.L.S. … In three volumes. London : Whittaker, Treacher & Arnot; Edinburgh, Stirling & Kenney, 1832. QL681 .W74 1832. (upper right) Image of pheasant from A monograph of the pheasants / / by William Beebe … ; in four volumes. London, England : Published under the auspices of the New York Zoological Society by Witherby & Co. …, 1918-1922. QL696.G2 B26X 1918 folio. (lower right) The Secretary from A general history of birds / / by John Latham … Winchester [England] : Printed by Jacob and Johnson, for the author : sold in London by G. and W.B. Whittaker … [and 3 others], 1821-1828. QL673 .L35 1821. (lower left) The natural history of Carolina, Florida, and the Bahama Islands : containing the figures of birds, beasts, fishes, serpents, insects, and plants : particularly, those not hitherto described, or incorrectly figured by former authors, with their descriptions in English and French : to which is prefixed, a new and correct map of the countries ; with observations on their natural state, inhabitants, and productions / / by the late Mark Catesby … ; revised by Mr. Edwards … ; to the whole is now added a Linnæan index of the animals and plants … London : Printed for Benjamin White …, 1771. QH41 .C35 1771 folio. (left) Picturae Etruscorum in vasculis : nunc primum in unum collectae explicationibus, et dissertationibus inlustratae / / a Joh. Baptista Passerio … Romae: Ex typographio Johannis Zempel, sumptibus Venantii Monaldini Bibliopolae, 1767-1775. NK4654 .P28 1767 folio. (right) Collection of engravings from ancient vases mostly of pure Greek workmanship : discovered in sepulchres in the kingdom of the Two Sicilies but chiefly in the neighbourhood of Naples during the course of the years MDCCLXXXIX and MDCCLXXXX now in the possession of Sir Wm. Hamilton … / / With remarks on each vase by the collector … [Naples] : Published by Mr. Wm. Tischbein … at Naples, 1791-1795. NK4624.5 .G7H36 1791 folio

In life, Robert Chanler was a muralist and screen painter of fantastical beasts and marine life. Even a cursory survey of his work shows how he drew inspiration from the books that surrounded him. He was a descendent of the well-known New York families—the Astors, Livingstons, Aldriches, and Stuyvesants—with legacies of noble professions—governors, generals, jurists, and clergymen. He was orphaned at age five, and his subsequent childhood was spent at his family estate, Rokeby, just outside of New York City where he and his siblings—collectively known as the “Astor Orphans”—were raised haphazardly by an ever-changing group of relatives and staff. In this wild and chaotic world, Robert was the wildest of the wild children. At age sixteen in the 1890s, he was shipped off to France where he studied at the École des Beaux-Arts. Stifled by the strictures of the École, Robert moved onto Italy and reveled in the passion and drama of Italian Renaissance works. Just after the turn of the twentieth century, Robert returned to New York. He bought a house on East 19th Street, dubbed it the “House of Fantasy,” decorated it in his style, and filled the basement with caged monkeys, sloths, and toucans, and the pool with crabs, seahorses, eels, and turtles. The house parties were legendary, including one in which George Bellows, living across the street, called in a noise complaint to the police only to later find the jolly policeman behind the bar with Robert Chanler who was wearing the policeman’s hat. The giraffes in the archwork above the entrance still mark the house today.

A return trip to France was momentous for two reasons. First, Chanler met Gertrude Vanderbilt Whitney who would become a patron and almost a partner for him. Second, he found a Chinese screen at a flea market. While other artists at the time were discovering and influenced by an Eastern style of painting, Chanler was taken by the highly lacquered painted surface and these reflective screens became his favored painting surface for his magical creatures. His art bridged—or, rather, broke down—the divide between fine art and decorative arts, much in the vein of the baroque interiors that had enamored him in Italy. His greatest success came at the 1913 Armory Show. He was the most acclaimed American artist of the Show, and two of his screens, the Hopi Indian Snake Dance and Porcupines, lined the entrance. Another seven screens are listed in the catalogue; however, because he was given permission to rotate his screens over the course of the Show, he exhibited about twenty-five different screens in total. Robert Chanler was the quintessential artist of the Gilded Age, with a stable of wealthy patrons—Mai Rogers Coe, James Deering, and Gertrude Vanderbilt Whitney were his most prominent. In 1913, a new clubhouse for the Colony Club—of which the Hewitt sisters were founding members—was commissioned. Friend of the Hewitts, interior decorator Elsie de Wolfe, reprised her role in decorating the new clubhouse as she had the first, and Chanler contributed mural work, enlivening the Aviary Room with a ceiling and wall panels a flurry with birds and florals. His work, in general, was for the interiors of their homes. As such, much of his work has been neglected, deteriorated, and forgotten. However, in the last few years, the Coe House in Oyster Bay, New York, the Gertrude Vanderbilt Whitney Studios in Greenwich Village, and the pool pavilion of Deering’s Villa Vizcaya in Miami, Florida, have opened to the public and Chanler’s fantastical creatures are becoming known once again. The Aviary Room at the Colony Club, New York, with interior decoration by Elsie de Wolfe and murals by Robert Winthrop Chanler.

While no direct social contact has been found between Chanler and Sarah and Eleanor Hewitt, his House of Fantasy at 147 East 19th Street was a literal walk in the park (Gramercy Park) from the Hewitt home at 9 East Lexington Avenue—a five minute stroll, according to Google Maps. But if not the sisters themselves, he did know their museum. He referenced the library at Cooper Union extensively in his own work, directly attributing his inspiration for interiors to specific pieces in the collection. Upon his death, he bequeathed 500 volumes of illustrated books, a gift inspired by the sisters’ personal contributions to the Cooper Union museum. A letter to the staff of the Cooper Union Museum indicated Chanler’s intentions: “Mr. Chanler frequently consulted the exceptionally fine library of French, English, Italian, and German books on 18th century decorative arts, collected by Miss Sarah and Miss Eleanor G. Hewitt, and given by them to the Cooper Union Art Museum. Using and appreciating these books, as he did during his lifetime, he realized that his own library which had been so useful to him in his mural and screen work, would be of real and permanent value to the students of Cooper Union Art Classes, as well as to the many others coming to the museum.” Chanler additionally gifted a small quantity of other designs to the museum’s collection, including his own designs for stained glass windows. Late in his life, Chanler retired to Woodstock near to his childhood home. There, he generously supported the local artist community, both with his time and money. Titles from Chanler’s gift to the library can be viewed through Smithsonian Library’s online catalogue. Some have been digitized and can be accessed online.

← Building up Affordable Housing in Interwar France
What Would William Morris Think? →