And the Crown goes to Crane 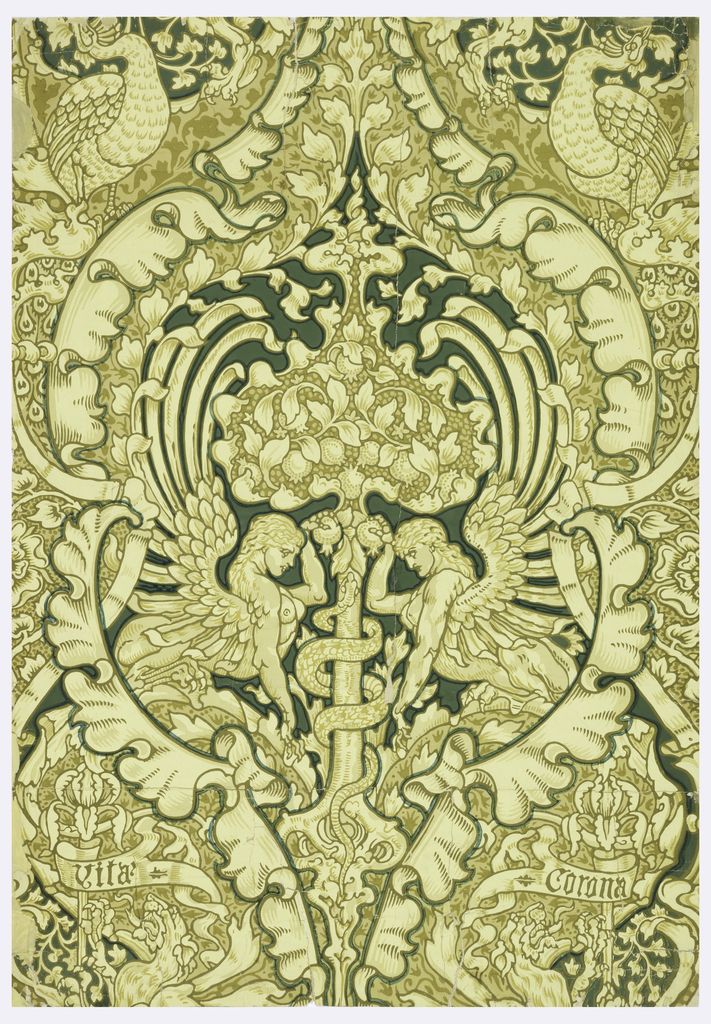 Walter Crane was one of the most successful of late Victorian designers, and this must be one of his most beautiful patterns for wallpaper. It is a multi-layered design featuring several fantastical motifs such as winged sphinxes, winged lions, peacocks, the biblical Tree of Knowledge with the serpent wrapped around it, and medieval standards topped with lily flowers and bearing the words “corona” and “vita”, “Crown of Life.” All of these motifs are framed by acanthus leaves and a field of stylized floral sprigs. The use of these sprigs may show the influence of William Morris, who used similar motifs to fill gaps in space in his patterns.

Crane must have been proud of “Crown of Life” when it was advertised, as it was accompanied by a statement from him: “Symbolically the design may be understood as generally emblematic of a full, rich, and ample life not without its changes and contrasts but ever springing anew to flower and fruition. While the floral winged lions, supporting the Crown of Life, indicate its material Triumphs, the sphinxes on either side of the tree figure its mystery, and those unanswered problems perpetually presented afresh to humanity on the Fruit of the Tree of knowledge. In the frieze the Crown again appears upheld in triumph by good genii of the house, in the full pride of its flowering time, alternating with the fruit-bearing seed after its kind.”

In an interview with Aymar Vallance published in the Studio in 1894, Crane identified his inspiration for this paper being Sicilian silk hangings and textile designs seen in medieval manuscripts. He also identifies a frieze and a ceiling paper called “The Four Winds” meant to accompany the pattern. The frieze and ceiling paper can be seen in advertisements in the collection of the V&A.

If it seems this complex allegorical image is a little too ornate to be repeated over an entire wall, the interviewer himself suggests that the paper’s “double pattern” could be judged as unsuitable for wall decoration. In this regard, he was echoing the advice of those design reformers who believed that patterning for flat surfaces should be for the most part simple, abstracted, and non-illusionistic. However, the paper’s complex design would have been welcome in the sumptuous and highly-aestheticized interiors promoted by members of the Aesthetic Movement. Furthermore, the Aesthetic belief in the equality of decorative arts to fine arts as a source of beauty and even spiritual satisfaction can be clearly felt in this paper and its rich metaphoric imagery. Overall, this paper is an excellent example of Crane’s consummate skill as a patternmaker and stands as one of his most symbolically rich designs.