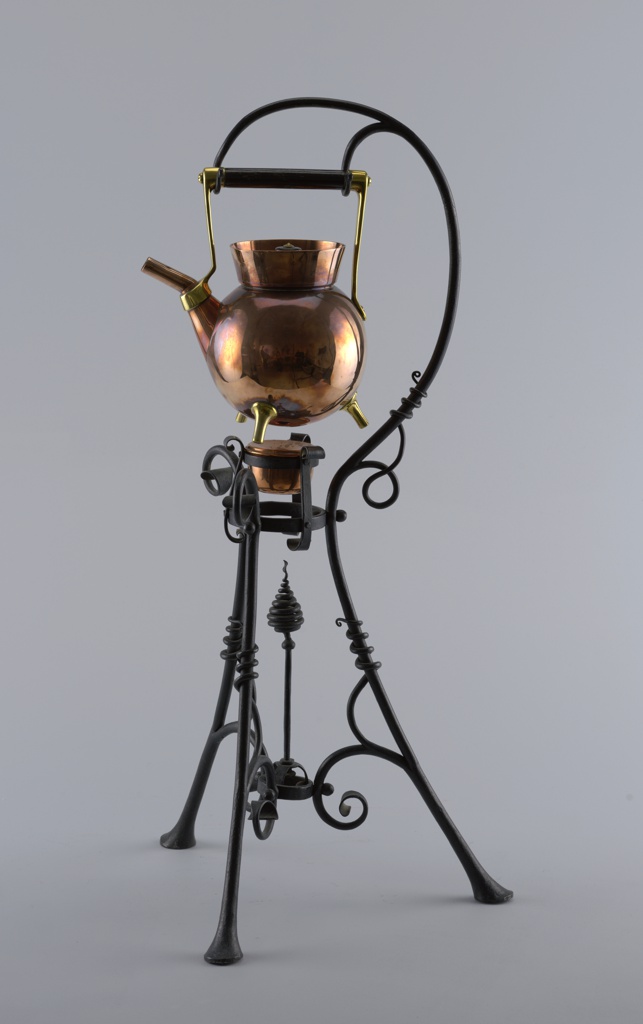 After American Commodore Matthew C. Perry forcibly opened trade relations with Japan in 1854, a cornucopia of Japanese goods flooded into Western markets. The groundbreaking use of perspective and asymmetry in the prints of Japan influenced artists that included Mary Cassatt, Claude Monet, and Vincent Van Gogh. In decorative arts, imported items like fans, kimonos, and pottery inspired designers to appropriate elements of Japanese design into their creations. Christopher Dresser had the great benefit of being the first Western designer to visit Japan following the opening, as he was able to garner inspiration from more than just the items that Japan exported to the West. The influence that Dresser took from Japan is evident in the sharp, brusque lines of this copper kettle on stand. Dresser has boiled down the idea of a kettle into only its most essential elements of a simplified body, handle, and spout without excess decoration.[1]

In addition to taking inspiration from Japan, throughout his life, Dresser was inspired by nature. As a teenager, he took courses in botany at the Government School of Design and soon became well known for his knowledge of plants.  He even drew a botanical plate for Owen Jones’s famed book, The Grammar of Ornament. While Dresser believed that designers should use natural forms as a starting point, he maintained that under no circumstances should they try to replicate flowers to cover up the essential purpose of objects. For example, Dresser did not precisely try to replicate ivy in color or form on this stand, instead, he used curving tendrils of cast iron that evoke the natural world.

Dresser was arguably the first person to take on the title of industrial designer. Unlike his contemporary William Morris, who felt that machines could only create ugly objects, Dresser believed that in order to democratize good design, designers needed to work with commercial enterprise and embrace industrial processes. Dresser partnered with manufacturing firms to create a variety of well-designed goods, including wallpaper, porcelain, and metalwork. This kettle and stand were commercially produced by Benham and Froud, a London-based company that made lamps as well as metal works. Although sold together, this kettle and its stand are rarely displayed in museums as a pair. Exhibited together, however, the twin strands of Dresser’s interest in botany and Japanese designs are shown in full bloom.