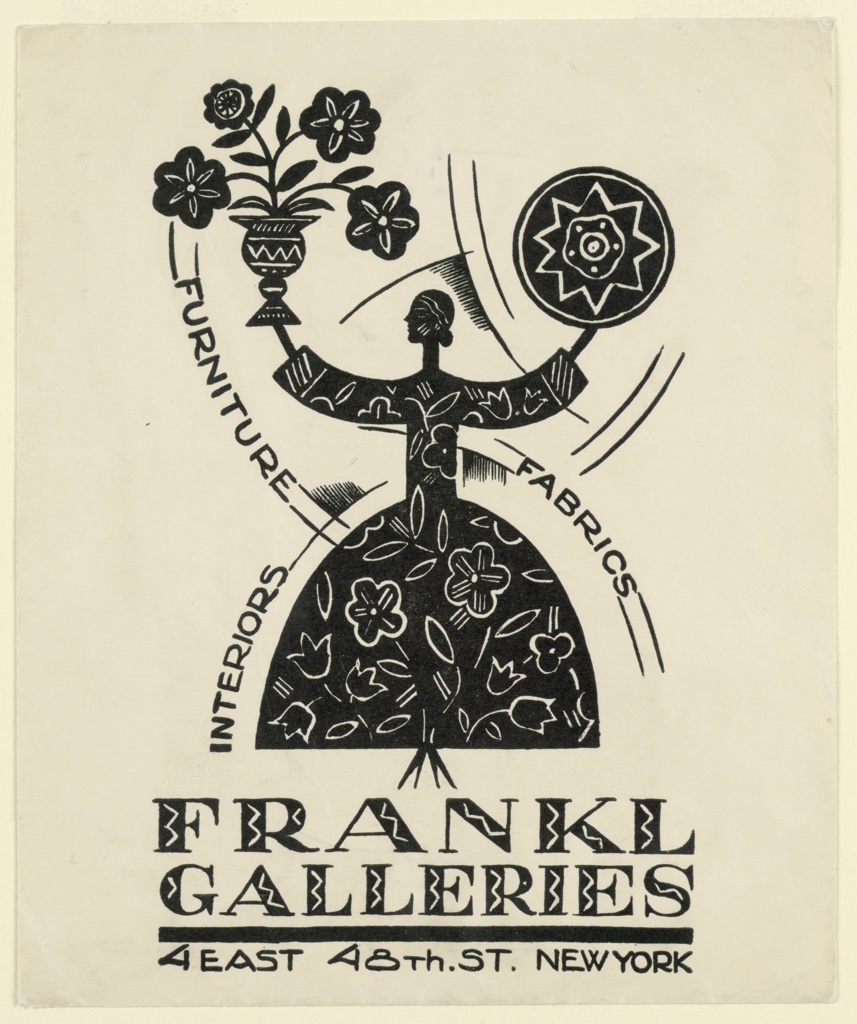 Opened in the early 1920s, when major museum exhibitions on contemporary American design were highlighting period revival styles, Frankl Galleries aimed to give direction to contemporary design in America, “particularly as it relates to industry.”[1][2]  Showcasing an innovative selection of furniture, decorative arts and interior design, Frankl Galleries inaugurated a new wave of Modernism in America, one which reworked elements of traditional and contemporary European design in accordance with changing American tastes and lifestyles.[3]

Born in Vienna in 1886, Frankl trained at a series of technical schools in Austria and Germany from 1911-13, frequently contributing to the architectural magazine Der Baumeister  upon graduation. In the spring of 1914, seizing an opportunity to report on the upcoming Panama Pacific International Exhibition in San Francisco for the magazine, Frankl set off on a journey to the United States that would change the course of his career. Stranded by the outbreak of World War I just a few months after his arrival, Frankl, short of money, remained in New York, designing posters for the International Art Service and acquainting himself with the growing community of progressive European designers who had fled the war.[4]  After a brief return to Europe in 1917, Frankl settled permanently in New York in 1922, opening Frankl Galleries at 4 East 48th Street.

Frankl Galleries became a meeting place for the expatriate avant-garde, from Joseph Urban, the Viennese designer who ran the short-lived outpost of the Wiener Werkstätte in America, to Winhold Reiss and multifaceted designer Ilonka Karasz, who is responsible for the whimsical illustration on this envelope. Challenging the popular historical styles of the time, this group believed that an expressly Modern American idiom would merge traditional techniques with a modern sensibility, marrying the handcrafted to the manufactured. The products offered for sale at the gallery, from Frankl’s own furniture to imported Italian pottery, French textiles and objects designed by Wiener Werkstätte, manifested this ideal.

Karasz, a Hungarian immigrant trained at the Royal School of Arts and Crafts in Budapest, similarly embodied the new concept of Modernity. Working in media as disparate as wallpaper, silverware, textiles and illustration (she is responsible for the design of 186 covers for The New Yorker), Karasz’s oeuvre is characterized by playful translation of Hungarian folk themes into a 20th century aesthetic. Her design for Frankl Galleries, which was used for advertisements in addition to printed ephemera like this envelope,[5] depicts the form of a woman reduced to flat geometric planes, clad in a stylized print dress that recalls the traditional floral patterning of her homeland. The vase and pinwheel held aloft by the abstracted figure, in addition to the mix of lettering from stylized block letters to the zig-zag ornamented serif lettering of the gallery’s name, are a visual proclamation of both Karasz and Frankl’s design ideology: the curated fusion of old and new design.

Frankl Galleries’ influence on design would be long-lasting: Donald Deskey got his start working at at the 48th street location, while Frankl himself went on to teach contemporary design at the University of Southern California and the Chouinard foundation.

Ria Murray is a graduate student in the History of Design and Curatorial Studies program offered jointly by Parsons School of Design and Cooper Hewitt, Smithsonian Design Museum. She is a Fellow in the museum’s Drawings, Prints & Graphic Design Department.

← “All Kirked Up: Tiffany and Co. Pitcher”
Return of the Native →

One thought on “To Be Frankl”

Have you seen “American Art Deco Furniture” by Ric Emmett? Published in 2015 it’s in the Cooper Hewitt Collection….