“All Kirked Up: Tiffany and Co. Pitcher” 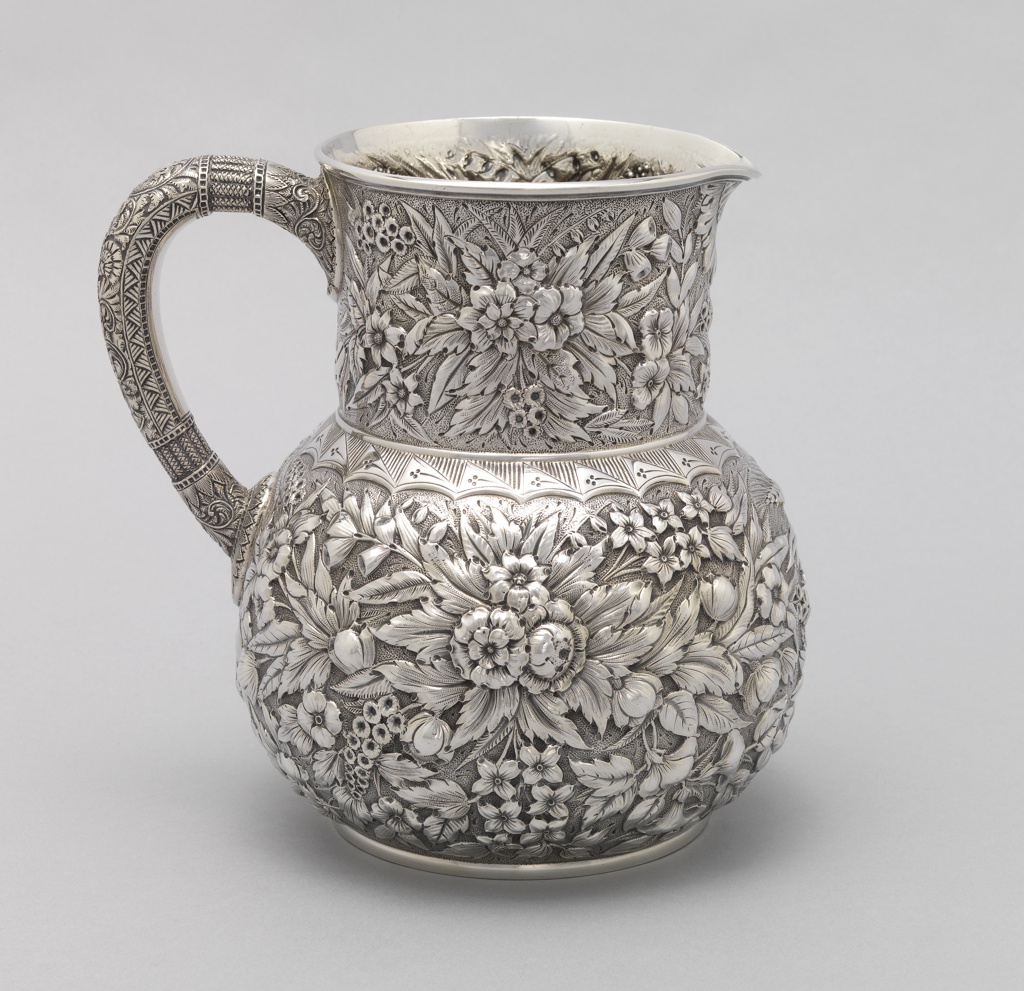 During the second half of the nineteenth century, there was a burgeoning interest in the designs of the Middle East, Japan, and China. This passion for all things that were “exotic” in the eyes of Americans led to a craze for objects inspired by these international decorative arts. At the time, much of the silver created by Tiffany and Co. was made in Revival styles, like rococo and neo-classical. This reliance on revival changed when Edward C. Moore was hired as the chief silversmith of Tiffany and Co., as Moore began to find new sources of inspiration. Moore possessed his own collection of Islamic decorative arts, and his assemblage included Iznik pottery, Mamluk metalwork, and Persian enameled and blown glass. Moore adapted many of the sources he saw in his collection for creating his silver designs. For example, the form of this pitcher strongly resembles a dragon-handled jug of Safavid origin that was a part of Moore’s collection. Both objects possess a low, squat body and a surface entirely covered by patterns. [1]

Remarkably, with this Islamic inspiration, Moore also incorporated a type of silver style that originated in Maryland. The body of this object is decorated in the “Baltimore Style,” which was a floral pattern first popularized by Samuel Kirk and Son. This extravagant style was widely popular with the Victorians. Although Kirk and Son released this style some 30 years before this pitcher was created, it continued to be in fashion throughout the nineteenth century, as silver makers like Moore poached this pattern to use on their own forms. The silver method of making this pitcher is known as “repoussé,” which is a process in which the design is hammered from the inside of the object to create raised decoration on the outside of it. This vessel was also “chased,” meaning it was hammered and refined from the outside of the body to create patterns that drive inward.

4 thoughts on ““All Kirked Up: Tiffany and Co. Pitcher””

I just had to post a reply to this. I instantly recognized the “Kirk” influence in this piece. My father was a silversmith – chasing was his speciality. He started at Samuel Kirk & Son’s as an apprentice in 1910(age 15) and retired as a “Master Craftsman” in 1960. His speciality was Kirk’s Repousse pattern and, by the end of the 1950’s he was dedicated to the hand chasing & finishing or all special orders for this line. I have a hand chased banquet service of Repousse that he made for my mother. Sometime in the later 1950’s Tiffany’s offered my father a job to be one of their in house “special order” silversmiths. He turned this down simply because he thought it to risky to leave Kirk’s after so long. Thanks for this memory!

Thank you so much for sharing this! The hand chasing and repoussé work is so detailed on Kirk wares. I’m glad to know your father was a part of making those beautiful wares!

I also want to thank you for this. My grandfather owned a jewelry store from 1910 to 1960, and he sold Kirk silver. When my mother was old enough, she would help out and work in the store. She always said that Repousse was one of the most popular flatware patterns–and this was in in Minnesota, far from the direct influence of tastemakers on the East Coast. My sister, cousins and I inherited several sets of sterling, none of them Kirk, but we have serving pieces and other items from that line, and we treasure them.

How fascinating to know that repoussé was popular in the Midwest as well as the East Coast! Thank you for sharing your story!