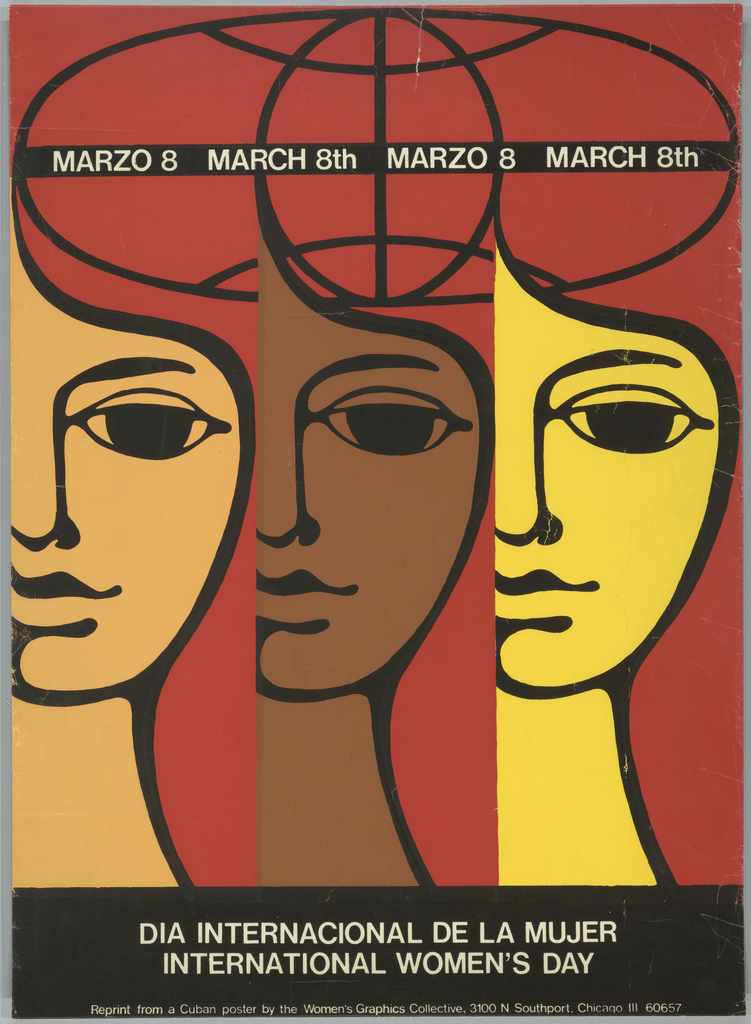 This bold poster was printed by the Chicago Women’s Graphics Collective to celebrate International Women’s Day on March 8, 1975. The elegant design uses direct, straightforward symbols to clearly communicate a message of unity, a popular design approach amongst political and activist posters from the 1960s and 1970s. In this example, the simple repeat of a stylized woman’s face in three colors across the poster’s design effectively unifies women of all races. The elliptical form above the women resembles a global map, suggesting that each figure might belong to a different region of the world, and the poster’s use of both English and Spanish text likewise transmits an inclusive message.

The unified spirit of this poster’s design is an important part of the group that created it. In 1970, four Chicago-based women designers founded the Women’s Graphics Collective, a creative group that brought together women designers and activists to produce art that advanced the goals of the women’s movement. Printmaking allowed the collective to distribute posters to large numbers of people at a low cost, and sharing space with the Chicago Women’s Liberation Union united the collective with like-minded women. By combining their resources in one workshop with shared materials, the collective eliminated the exclusivity of art-making—the designers opened their doors to any women eager to collaborate regardless of formal art training.[i]

In order to separate their new feminist art from the male-dominated traditions of modern Western art, every poster was designed and completed by committee rather than by individuals. A 1973 Chicago Tribune article explained that the women, “plan[ned] their ideas at gigantic ‘poster thinks’—sessions in which people toss[ed] thoughts around until designs appear[ed]. Everyone share[d] in the dirty work, the silk screen stenciling, printing, and clean up.”[ii] Since members were already printing collective images, they were open to printing designs that originated elsewhere, using the profits from sales to support their operational costs and to showcase the wide range of the women’s movement and feminist design. This particular design represents such a use of borrowed imagery—the text at the bottom margin credits the original poster as a Cuban design.

While the first International Women’s Day occurred in the early 20th century, 1975 was a significant year for the event. The women’s movement was rapidly expanding in the West, and 1975 proved to be the first year that the United Nations honored the day. The UN’s recognition popularized the event, and the photograph above shows a Chicago Women’s Liberation Union volunteer in 1975 with a version of the collective’s poster hanging behind her at right. In 1977, the United Nations General Assembly cemented International Women’s Day by proclaiming March 8 the UN Day for women’s rights and world peace. Today, March 8 marks a celebration of the diverse achievements of women across the world as well as a call to action for greater gender equality.[iii] Driven by feminist democratic design, the Chicago Women’s Graphics Collective produced and distributed thousands of posters supporting the women’s movement worldwide.

[ii] Linda Winer, “Posters that express the reality of being a woman,” Chicago Tribune, February 11, 1973.

← Sink or be Sunk
There’s Only One-Way →