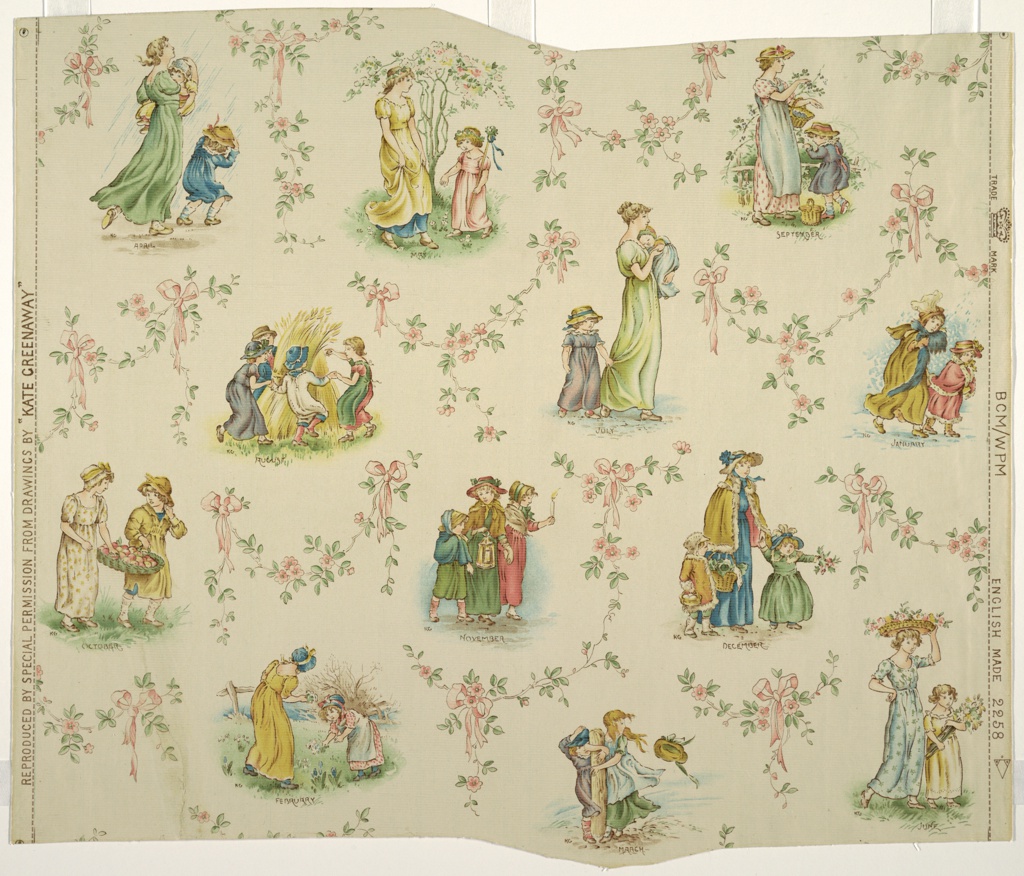 Kate Greenaway was one of the most popular children’s illustrators of the late Victorian period, a rival of Walter Crane and Randolph Caldecott. From 1879, when she published her first children’s book Under the Window to her death in 1901, she illustrated over 50 publications from nursery rhyme books to ABC’s to her own annual almanacs. Her main motif, girls in simple dresses frolicking in an idyllic pre-industrial countryside, sparked a major trend in children’s clothing. Liberty’s of London would be among the retailers who attempted to sell the “Greenaway look” for girls’ fashion. Her nostalgic illustrations also attracted the admiration of John Ruskin, the great Victorian art critic, who was one of her greatest advocates. However, Greenaway, even at the height of her popularity, still struggled with money. In at least one instance, she raised money by selling rights to wallpaper companies to reproduce some of her illustrations on wallpapers. This is the case for the sidewall seen here, which uses the illustrations from her 1893 Almanack. The twelve character groups here represent the months, and there would have been an accompanying frieze that showed the four seasons. Another illustrator who allowed wallpaper companies to use his drawings was Randolph Caldecott.

The company who produced this, David Walker, was based in Lancashire. It achieved success in the late Victorian period selling mechanically-printed sanitary papers, papers that were printed using oil-based pigments and thus could be washed. Walker’s papers were particularly high-quality, using good paper and a large amount of colors. The choice of the company for this paper was thus ideal. Sanitary papers were perfect for nurseries, where a paper like this likely would have gone.

← Green Glossary: K for Kibiso
Where It’s At →