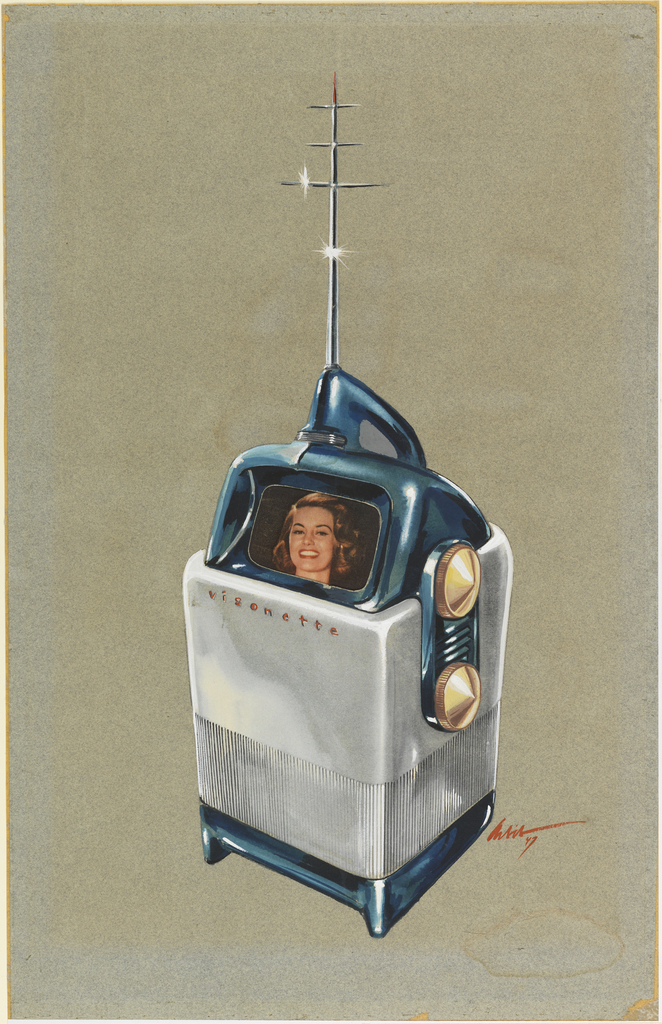 At the 1939 World’s Fair in New York, the Radio Corporation of America (RCA) debuted its first electronic television, a symbol of American innovation and technological prospects.[1] However, the advent of World War II impeded the expansion of television, and the commercial development of receivers did not begin until 1946. In that first year, only 6,500 sets were produced, but by 1948, the number climbed to nearly one million.[2] In the post-war period, early televisions were often designed as a piece of wood encased furniture with a “streamlined” aesthetic. The streamline trend emerged out of the 1930s, a time when symbols of modernity derived from transport and dynamism. The enthusiasm precipitated a surge of streamlined products like radios, electric heaters, and toasters.[3] Television sets were not exempt from the period’s consumer trends, so it is reasonable that industrial designers, who favored the streamline form, would experiment with the mechanism.

Richard Arbib designed Design for a Visionette Portable Television in 1947, but he began his industrial design career at General Motors in Detroit in 1939 after graduating from Pratt Institute in New York. Arbib showed an interest in automobile design as a teenager, and his innate talent earned him a lifelong career in the transportation industry.[4] In 1945, Richard Arbib accepted a position at the Harley Earl Corporation (HEC), a design company that engaged with a diverse range of industries. It was during this period at HEC that Arbib drew his Design for a Visionette Portable Television.

The portable television is depicted in bold paints with a grey rectangular body, while the base and feet are painted in vivid turquoise blue. In thin lettering, Arbib writes ‘Visionette’ in red across the front. A glare shines on the television set through strokes of pure white and black paints, imparting an attractive, glossy quality to the object. The curved lines of the object and its industrial hues communicate Arbib’s streamline aesthetic and present an inviting, sleek illustration to the viewer. In the section of the drawing where the screen is represented, a printed image of a woman’s face surfaces. The woman has lustrous brown hair and her gaze is directed outwards to engage the viewer, inviting us into the television screen. The woman is beaming broadly, her white teeth scintillating like the box around her. The inclusion of a printed image is visually striking, for it creates a contrast between the stylized forms of the television set and the realistic representation of the woman on screen. This juxtaposition lures the audience’s eyes to the joyful female, appealing to a viewer’s own human sensibilities.

Although there is no evidence that the Visionette Portable Television was ever manufactured, the signature on the drawing implies that this object is a finished work, not simply a meditative drawing of a portable television design. The drawing is a pictorial presentation of Arbib’s design and exists as an announcement of Arbib’s concepts for the television and its technological potential.

Lily Gildor is a candidate in the MA History of Design and Curatorial Studies program offered at Parsons The New School of Design jointly with The Cooper Hewitt.  She is a Master’s fellow in the Drawings, Prints and Graphic Design department.

One thought on “A Traveling Television”

I received the latest Object of the Day email and realised something that may have been overlooked in the description of this object.

“Visionette” had already been used as a name for earlier Western Television sets.

I actually wondered if the original name, may have been planned as “Vigonette” (similar to “vignette” perhaps) as the rendered “s” could almost be read as a “g”?

However, as I am in Australia and have no access to the original, I cannot verify if any of this is correct.

I would also like to say how much I always enjoy receiving the Object of the Day emails and look forward to seeing something of the collection in my Inbox every day.