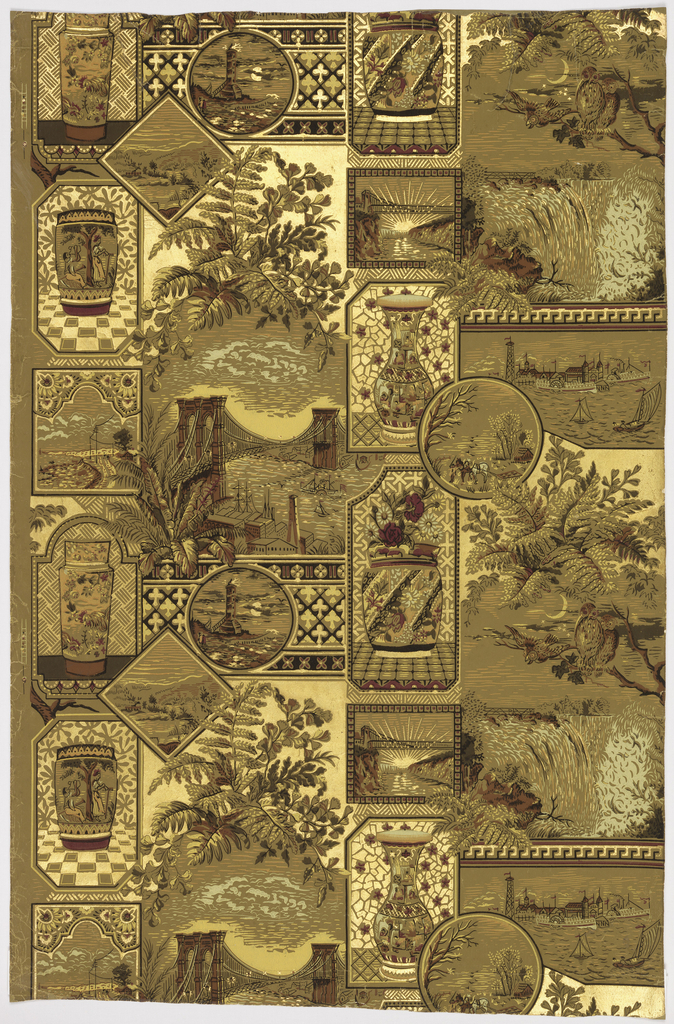 Japanese vases, Niagara Falls, and the Brooklyn Bridge are unusual companions in this American paper from the mid-1880s. The paper melds the long-popular fashion in the US for papers depicting landscapes with the then-current obsession for “Japonesque” patterning. This obsession had its origins in the importation of Anglo-Japanese papers from England in the 1870s. These papers were made by such designers as Christopher Dresser (who also made some Japonesque papers for American companies), William Burges, and Edward William Godwin. Soon these papers were joined by others by the American designers Christian Herter and Louis Comfort Tiffany. Early Japonesque patterns followed tenets promoted by such design theorists as Owen Jones and Charles Eastlake, emphasizing flatness, conventionalized floral motifs, and restrained color schemes. However, by the time this paper was produced, mass-produced examples of Japonism had already distorted and exaggerated the style. Gone was the emphasis on flatness and stylization. Trompe-l’oeil imagery of fans, vases, and flowers were scattered pell-mell with realistic landscape or figural scenes in Japanese-style asymmetrical compositions.

This paper seems to combine its use of a fashionably exotic style with a homegrown sense of national pride. The Brooklyn Bridge, finished in 1883, was a new and much-talked about icon when this paper was produced. Its designer John Augustus Roebling had also built a suspension bridge at Niagara Falls in 1854, which might explain the presence of the falls in the design. The other bridge depicted might be another one by Roebling constructed across the Ohio River in Cincinnati in 1866. Other scenes in the paper include more idyllic scenes of American industry, including a depiction of telegraph wires, a lighthouse, and a bustling pier scene with paddleboats.

The company that produced this, W.N. Peak, was founded in 1876. Its factory was in Brooklyn, and its showroom was at 683 Broadway near Union Square. It produced a wide range of inexpensive manufactured papers, including many chintz and floral papers. An 1884 listing of “New York’s Leading Industries” described the company’s papers as “justly celebrated” and “strikingly effective and artistic in appearance.” The fact that Peak’s showroom was in such a central Manhattan location seemed to be unusual, and it spoke to the company’s success. Certainly given the company’s origins, this paper’s design indicates not only nationalistic pride on the part of the designer, but local pride as well.

← Spatializing Citizenship: Public Culture at the Border
From Mud Into Immortality →