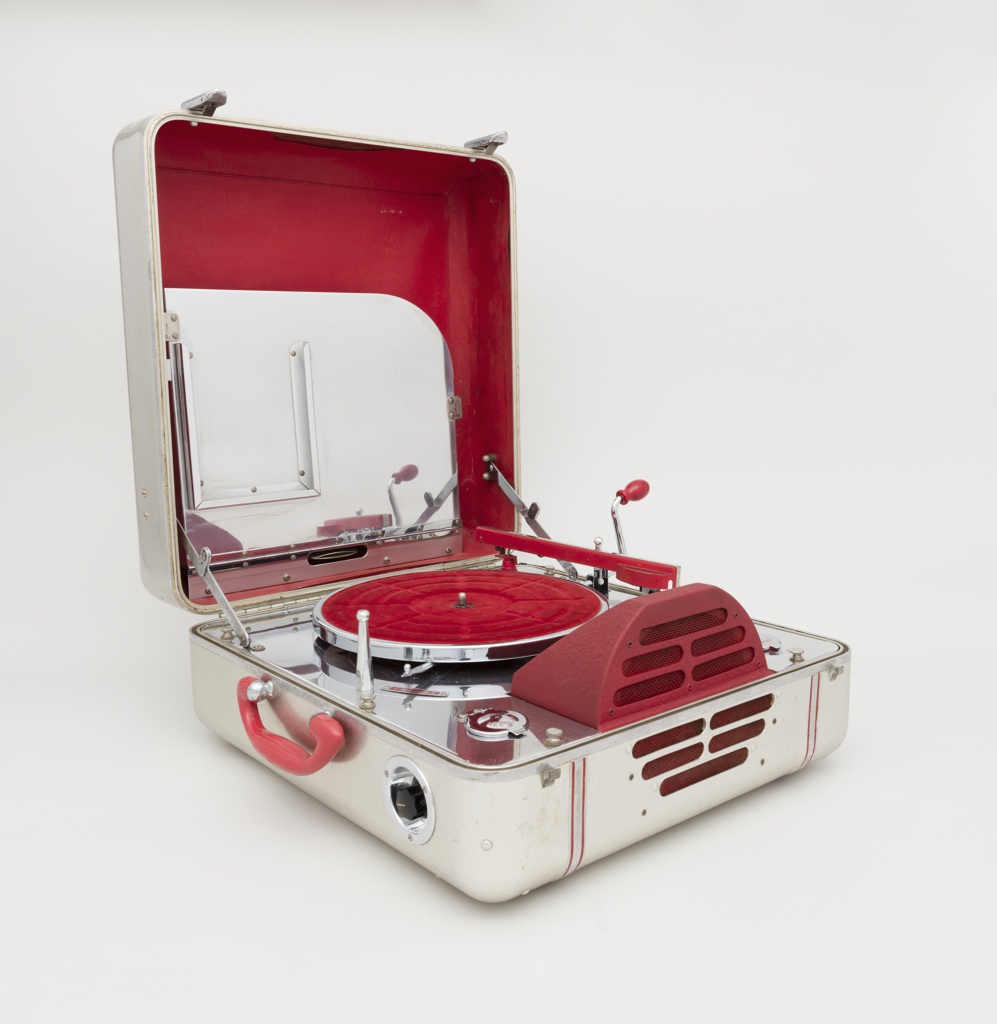 Posted by Rachel Hunnicutt on November 16, 2016

This sleek icon of American design embodies the simultaneous rise of listening technology and the streamline moderne style in the 1930s. This portable phonograph’s mechanism was engineered by Alfred Weiland and Selden T. Williams while its case and overall aesthetic were conceived by the prolific graphic and industrial designer John Vassos. Born in Romania, Vassos immigrated to Turkey and then to America, where he developed a diverse range of products including accordions, turnstiles, and shotguns. Perhaps his greatest legacy lies in the products he designed for the Radio Corporation of America after establishing its first in-house design department in 1933. During his subsequent forty-three year tenure there he designed the firm’s first commercial television set, a solid state computer, and even an electron microscope in addition to an array of listening devices such as the RCA Victor Special portable phonograph. Vassos was also a key figure in the professionalization of industrial design in the early twentieth century; he was a founding member of the Industrial Design Society of America in 1965 and served as its first Chairman of the Board.

As the emergent field of industrial design was coming into its own, so, too, was the radio industry. Although radio technology had been in development since the late nineteenth century, it wasn’t until World War I that it became an essential tool for communication. After the British cut or diverted Germany’s submarine telegraph lines, wireless radio traffic increased exponentially on both sides of the front, becoming an important medium for relaying both strategic military messages and civilian news and entertainment. After appropriating corporate radio patents to support the war effort, the US Departments of War and Navy sought to maintain state control of the radio industry in its aftermath. Government officials strategized with General Electric executives to establish the Radio Corporation of America in 1919; along with Westinghouse, RCA was granted a state-sanctioned monopoly on radio technology. Ten years later, the firm acquired the Victor Talking Phonograph Company, then the world’s largest manufacturer of phonographs. The scene was thus set for the introduction of the RCA Victor Special in the mid-1930s.

Streamlining found expression in an ever-increasing number of consumer goods, such as domestic appliances, automobiles, and, of course, radios and phonographs. Particularly during the Great Depression, manufacturers turned to industrial designers to distinguish their products from their competitors; these practitioners frequently emphasized the speed and energy of the period using aerodynamic curves, stepped forms, and the vertical rib motif, or streamlines, for which the style is named. In addition to this visual language, designers embraced new materials such as plastic and aluminum, both of which are incorporated into this design. Thanks to these lightweight materials, battery power, and a felt-lined interior with tabulated folders for on-the-go record storage, the device was as portable as its rounded edges and streamline accents make it appear. The chromed finish and bright red accents lend the phonograph an air of automobile elegance on par with anything found on the production line in Motor City in this period.

← A Parable on Paper
Cut Out Katahdin →

One thought on “A Landmark Design with an Aluminum Shine: John Vassos’s RCA Victor Special Phonograph”

Thank you for this. Selden T Williams was a prolific inventor, great thinker, business leader, and my grandfather. His protege was Malcolm Baldridge, former Commerce Secretary and namesake of the annual Baldridge Quality Award.