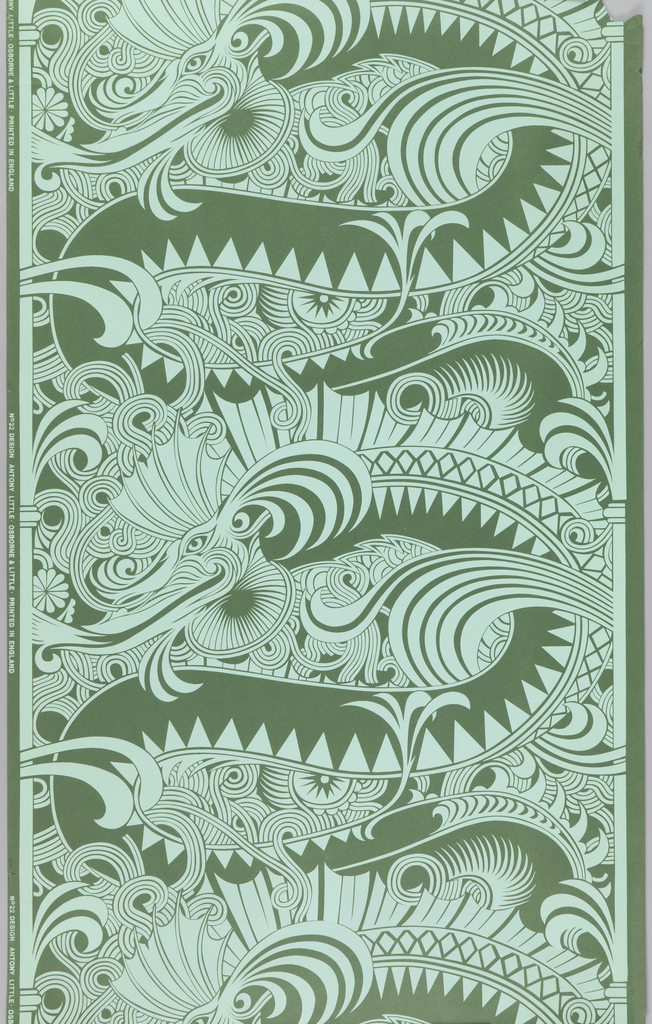 This wallpaper was one of the first produced by British wallpaper company Osborne and Little, founded in 1968 by designer Antony Little and businessman Sir Peter Osborne. The company was one of several that arose in the 1960s that promoted themselves as a source for unusual wallpaper patterns. Osborne and Little produced their designs in very short runs, printing every paper by hand using a screen-printing process, and the source of the patterns was largely in-house, with its co-founder Little being responsible for many of them. They appealed to a growing market of people looking for originality in wallpaper design, a desire that was not being served by major manufacturers more obsessed with affordability and technical innovation. The rise of youth culture in Britain, particularly the Mod subculture, also contributed to this developing taste for individuality and uniqueness.

This design is called “Chinese Dragons.” Its inspiration was the pseudo-Chinese/Indian interiors of the Royal Pavilion, a royal residence in Brighton that was redesigned in the early nineteenth century in the Indo-Saracenic style. Another influence on the design seems to be the ceramic lusterware of William de Morgan, a late nineteenth-century British designer associated with the Arts and Crafts and Aesthetic movements. Still other aspects of the design point to more modern influences. The preponderance of curves evokes the whiplash lines of the Art Nouveau style, a major influence on psychedelic art in the 1960s. The dizzying visual effects brought on by the swirls of black and white lines also shows the influence of Op art, a popular mid-century fine art movement. Art Nouveau and Op art-inspired designs were common at this time, especially in papers meant to appeal to young adults, but the nineteenth-century influences were less commonly-seen and points to the company’s attempts to visually differentiate their work from other wallpaper producers and establish themselves as a quintessentially “British” company. Other patterns they produced at this time would draw influences from the papers of William Morris and Liberty and Co., where the company also sold work. Thus this design not only is visually intense and beautiful, but also shows how the company successfully appealed to exotic and modern tastes while still situating their work in a venerable British artistic lineage.