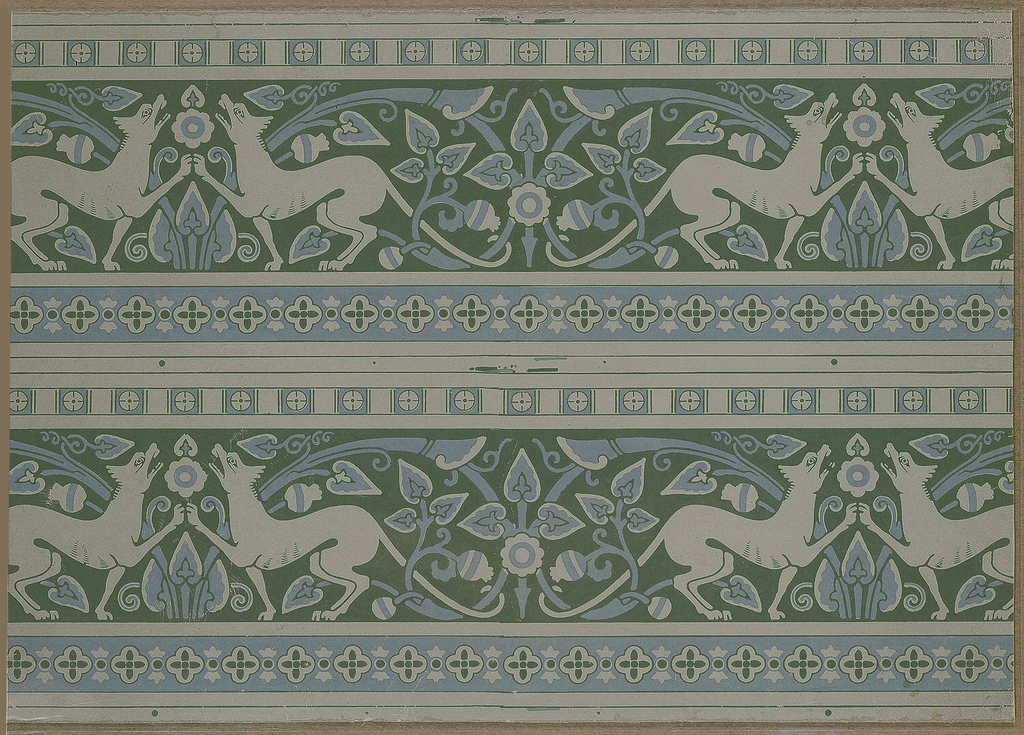 This wallpaper shows two sections of a frieze design by the architect and designer William Burges. Known as one of the pre-eminent practitioners of the Gothic Revival style in Britain, Burges was known for his obsession with the Middle Ages, and he frequently referred to himself as a “Goth.” Perhaps his most famous works include Cardiff Castle and Castle Coch, two ruined medieval castles in Wales whose reconstruction he planned and oversaw, as well as for his own personal home, the “Tower House”, known for its castle-like exterior. In all of these commissions, he was responsible for the interior design scheme as well. He was known for favoring heavy ornamentation in his interiors, as well as in his furniture and metalwork, with nearly every surface covered with inlays, carving, or painted decoration. He especially loved to incorporate figurative scenes in his ornament, drawing from myths, medieval romances, and animal fables.

This wallpaper was one of a handful that Burges designed. He actually disliked the medium and thought it a poor substitute to traditional wall painting, but perhaps he was convinced to do some designs after he saw the Gothic revival interiors created by his idol AWN Pugin for the Houses of Parliament, which heavily featured wallpapers. Unlike Pugin, Burges was known, and criticized, for the somewhat unusual and lively depictions of animals he frequently incorporated in his wallpapers. For example, this frieze features dogs with snarling, vicious expressions that are both energetic and somewhat macabre. The dogs’ flatness and stylized poses evoke designs from medieval textiles and tilework, and the plant forms behind them bring to mind illuminated manuscripts. However, the plain color scheme and clear definition of forms in the frieze makes it also distinctly modern, a product of a period of design reform that discouraged the use of trompe-l’oeil effects, cluttered patterns, and bright color schemes. Ultimately, the work is a testament to its creator’s wonderfully idiosyncratic imagination and his ability to bring the medieval aesthetic he adored into the new age.