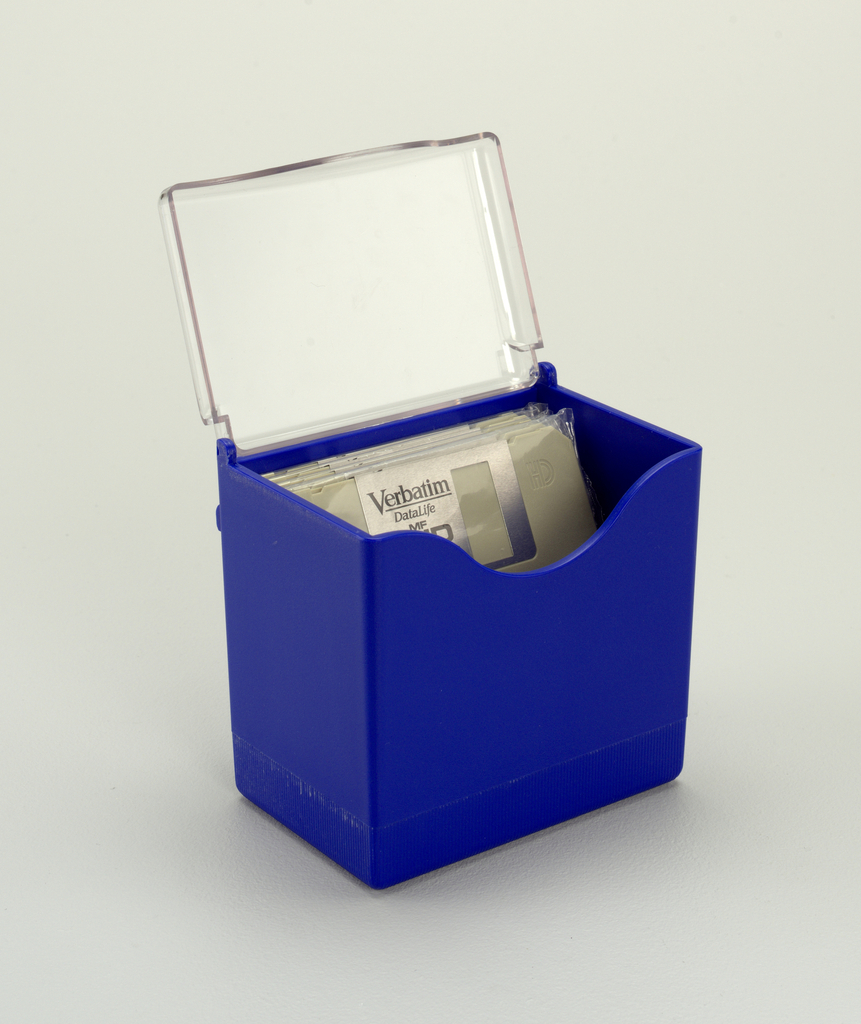 Posted by Rachel Hunnicutt on September 27, 2016

Knoll Group’s Orchestra Disk Holder is an artifact of the bygone days when floppy disks were the most widely used digital storage tools in the corporate landscape. First introduced by IBM in 1971, the floppy disk reigned supreme until the late 2000s when smaller-scale or higher-tech alternatives like the USB flash drive, optical discs (CDs and DVDs, in layman’s terms), and the now-ubiquitous cloud supplanted diskettes came into use. In its heyday, however, the floppy disk served an important function in corporate data management and workflow, and the ever-innovative Knoll Group’s 1990 Orchestra desk accessories suite acknowledged its primacy of place in the office. The Orchestra suite (many pieces of which are also in Cooper Hewitt’s collection) was conceived of as a simple and harmonious solution for desk organization.

Now practically unknown to younger generations of office workers, the floppy disk was an important piece of workplace technology. The Knoll Group (who in 1973 released one of the earliest incarnations of the cubicle, the Stephens System) took the central role of floppy disks into account when designing the Orchestra desk accessory suite. Designers Bruce Hannah and Ayse Birsel conceived the system to take into consideration the different functions, habits, and individuals that contribute to a successful organization and to weave them together into a single composition. Hannah, a 1963 graduate of Pratt Institute’s industrial design program, frequently embraced modern technology and materials, exploiting them to create objects in response to specific problems – an approach that sums up the designer’s creative philosophy. Birsel, his student and a Turkish émigré, sought inspiration in collaboration; after a year and a half of researching and working together the pair produced the Orchestra organizational system, a group of objects as simple as they are practical.

The products’ musical metaphor is echoed in Knoll’s marketing literature from 1990, which asserts that “an organization that sounds out of tune is not going to succeed. A company in perfect pitch is. That’s what Orchestra is all about.” The suite is made from polystyrene plastic with a matte, textured finish and, thanks to the Knoll’s Universal Load Bar or Info Rail, can be mounted in any environment, from the executive’s corner office to cubicles positioned throughout the open landscape office. The Disk Holder was just part of a larger system, which included memo trays, business card holders, a planter, as well as a small diskette tote for taking your data to-go, that allowed corporations to create a visual harmony throughout not just the physical office interior but its workflow patterns, as well. The Orchestra system democratized design in the workplace, allowing employees of different echelons to utilize and appreciate well-designed products that led to increased efficiency. The Orchestra is still produced by Knoll today, perhaps the truest testament to its success. Although the color palette no longer includes Electric Blue and the now-antiquated Disk Holder is no longer available, the organizational system speaks to changing trends in workplace design and the interrelationship of design, efficiency, and technology in the office.

← Out of Italy
Psychedelic Seats →