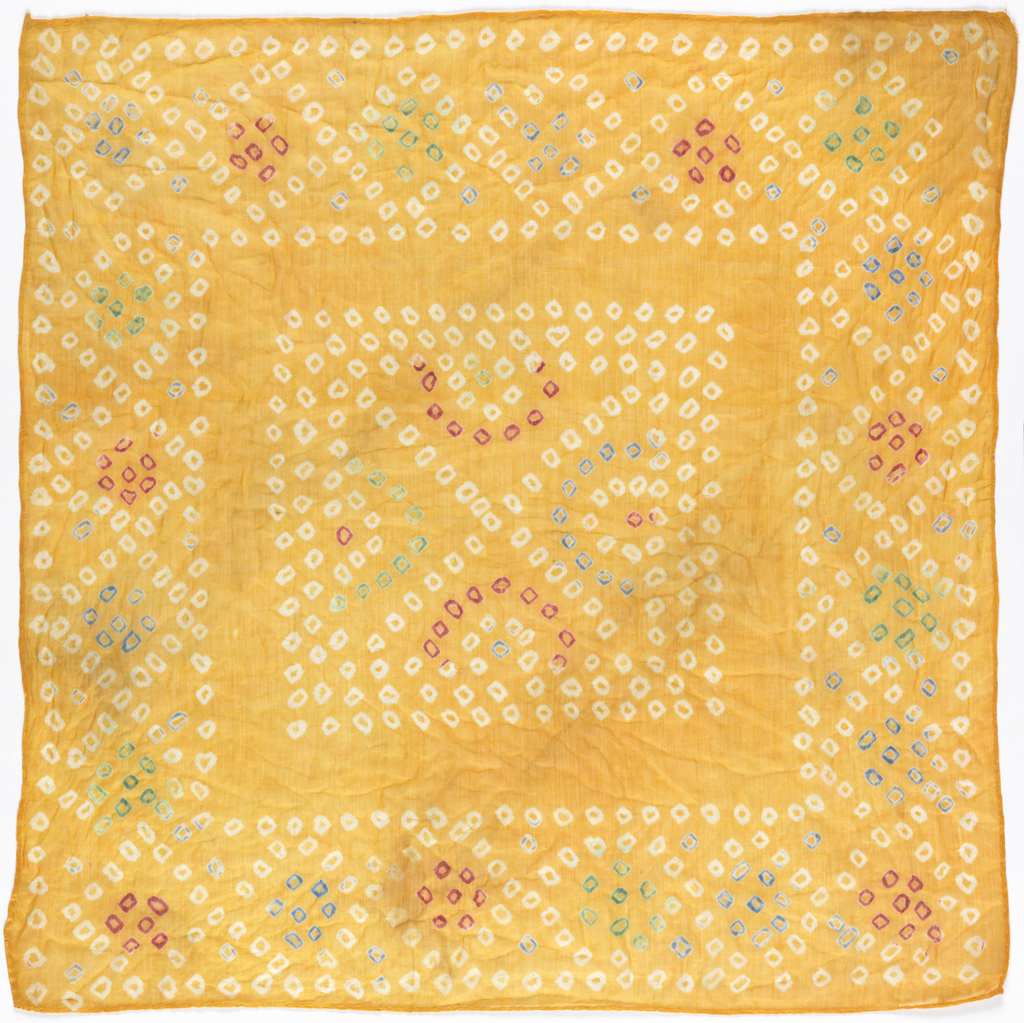 This bandana was made using a resist-dye technique called bandhani. A method of tie-dying, bandhani involves tying pieces of cloth with fine thread in order to block specific areas from the dye. The term bandhani derives from the verb bandhna in Hindi-Urdu (Urdu: باندهنا, Hindi: बानदहना), meaning “to tie” or “tying”. This piece was originally white and dyed yellow, while the green, blue, and red shades were likely painted on.

The seemingly straightforward process of tying and dying fabric is really quite labor-intensive, and requires experience, skill, and patience. The small and precise diamonds are formed by plucking up the fabric and winding thread around the tiny pinch of cloth. There can be several phases of dying, washing and, if necessary, starching the fabric. The tiny dots can also be designed into elaborate figures, shapes, and narratives.

Finally, the ties are removed, though usually not until the bandhani textile is sold. Keeping the ties on ensures the customer that the dye-work is authentic and not a printed imitation.[1] To remove all the ties, the the fabric is pulled by two people in opposite directions until all the ties open and fall off, as demonstrated here.

The English word ‘bandana’ also derives from ‘bandhna’ and is related to the bandhani resist-dye technique. In the 18th century, the definition of a bandana was much narrower than it is now. It referred to silk handkerchief cloth products specifically that were tie-dyed or printed in India and exported to London by the English East India Company.[2] With that in mind, this bandana from Cooper Hewitt’s collection was probably known as a rumal at the time. It could be worn in a variety of ways: around the throat, as a shoulder-cloth, or a head covering, such as a turban. Incidentally, kerchief is from the French couvre-chef (“cover the head”).[3] It would also be used as tray lining, as cloth waved in salutation, or as a horse’s fly-whisk.

Shahzeen Nasim is a summer 2016 Peter Krueger intern in Cooper Hewitt’s Textiles Department. She has a BA in English Literature from Haverford College, Haverford, PA.