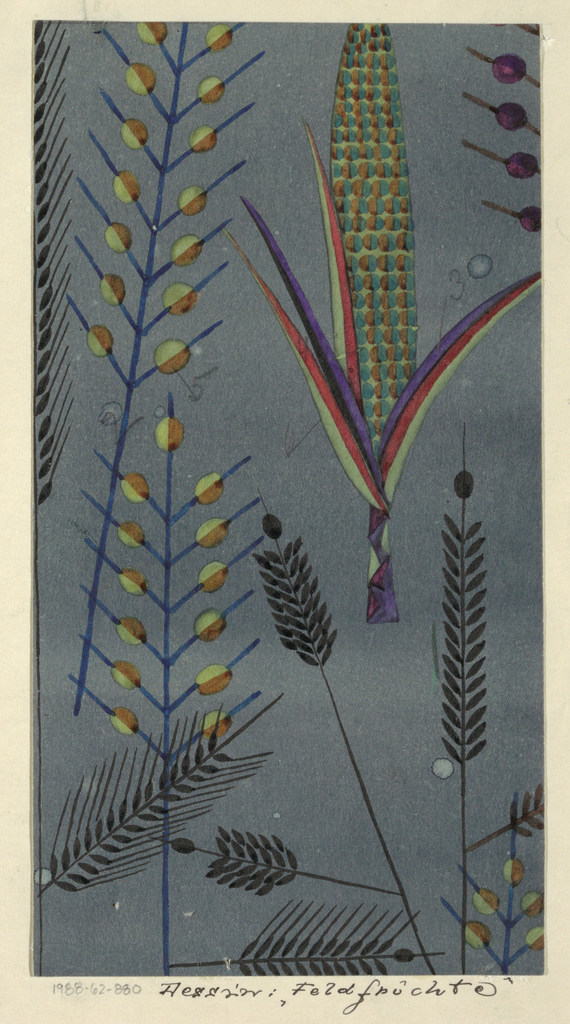 A cob of dizzyingly technicolored corn shoots to the top of Felice Rix-Ueno’s textile design Feldfruchte: Steel with Indigo and Brown.  Sheaves of wheat and grains float around the bright maize.  As summer draws to a close, few foods resonate more than corn, sweet and sun-ripened in the hazy days of August.

Rix-Ueno’s title draws on the term “feldfruchte,” a German word meaning “crop,” and is followed by a description of the color palette: steel, indigo, and brown.  Executed in brush and gouache on paper, this object is a quintessential design drawing.  It belongs to the Drawings, Prints, and Graphic Design Department and was intended as textile design, despite its inherent beauty as an in-process painting.  A closer look reveals graphite numbers, identifying colors and providing insight into the design process.

Felice Rix-Ueno was a prolific designer and professor who began her career in Vienna, Austria, working in the famed Wiener Werkstätte.  The Cooper Hewitt is proud to have nearly two hundred objects affiliated with her designs.  The Werkstätte or “workshop” was established in 1903 in the wake of several design reform movements in Europe, including the Arts & Crafts Movement and the Vienna Secession.  With the lofty goal of designing domestic furnishings that complimented each other and rendered the entire home a “gestamtkunstwerk,” or holistic work of art, the Wiener Werkstätte was sweeping in its engagement with a range of mediums and craft processes.  One cannot help but imagine what a home driven by the Feldfruchte pattern might have entailed.  The connections between crops, agriculture, nourishment, and domesticity are highly connotative yet Rix-Ueno developed her design with unexpected colors.  The pattern is at once modern and traditional but more than anything, it is striking.