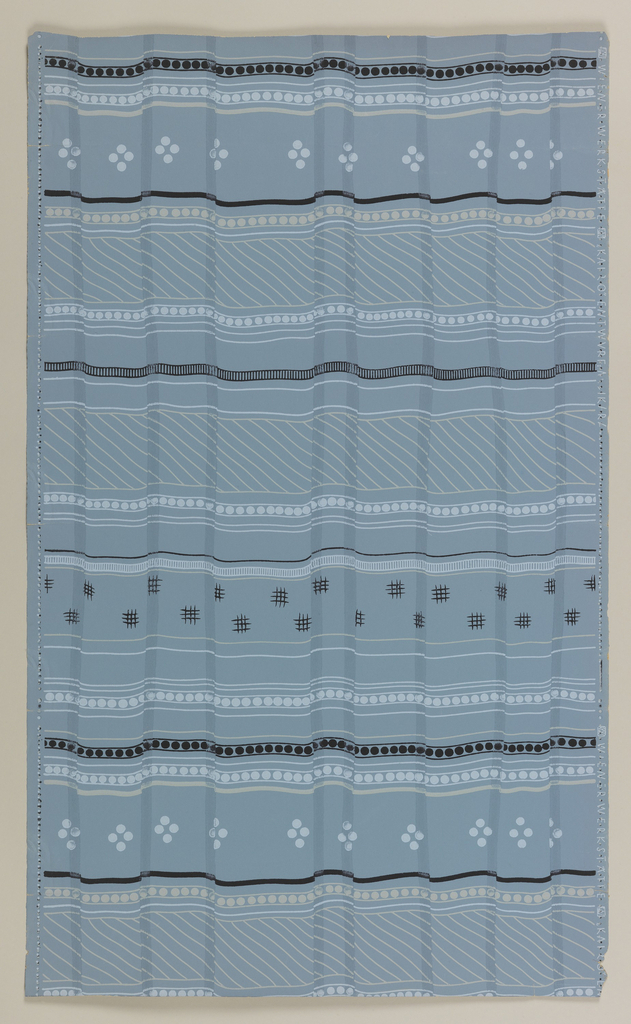 Posted by Gregory Herringshaw on August 8, 2016

Here is an interesting version of a drapery wallpaper design. Wallpapers imitating draperies have been a small but elegant genre since the time of Napolean, when walls draped in fabric were popularized by the design and decorating team of Percier and Fontaine, largely credited with creating the Empire style. Many of the finer papers were flocked or polished to create the look of cut velvet and silk satin. This drapery design is equally elegant but much more mainstream as it is machine-printed in a mere three colors on a blue ground. No flock, no hand polishing, no thirty colors hand printed by woodblocks. What makes this design so exquisite is that the designer was able to pick out the most salient features of a good drapery: the way the fabric drapes, how the shadows fall on the pleats or folds in the fabric, the way the embellished pattern continues up and over those pleats. The pleats appear somewhat rigid, almost to the point of abstraction, but not quite.

The museum is fortunate enough to also have smaller swatches of this design in alternate colorways. These swatches are part of a group of European wallpapers, all in the modern style, imported into the United States by American firm Katzenbach & Warren. The Katzenbach firm was based in New York and became one of the premier wallpaper manufacturers in the United States. This was designed by Maria Likarz-Strauss, one of the leading women designers at the Wiener Werkstätte. She worked there from 1912-1914 and then again from 1920 until 1931. Initially she worked primarily in graphic design, then later broadened that scope to include a wider range products, including textiles and wallpapers.