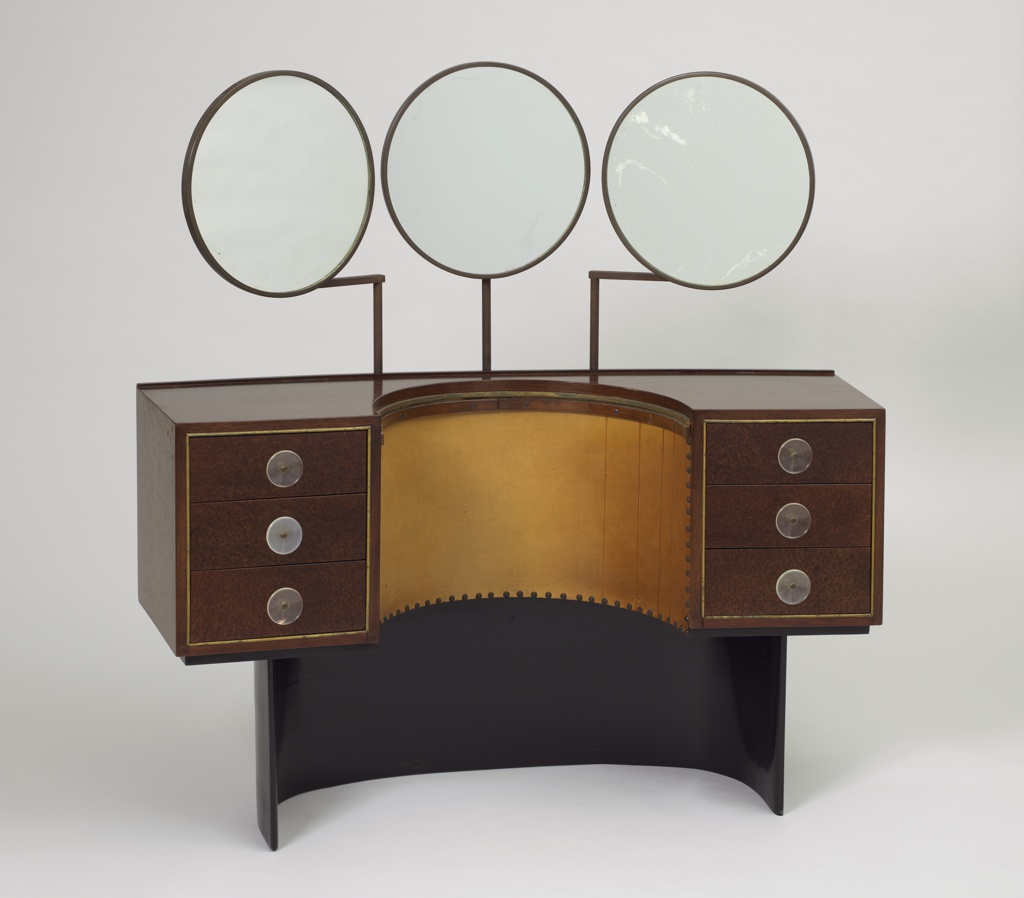 Whether you call it a dressing table or a vanity, during the 1930s and 1940s this furniture form expressed the glamour and mystique of femininity. A woman sitting at her vanity—preparing to go out or to entertain in her home—connotes the vanity’s cultural associations with beauty, self-image, and preparation. Designed by Gilbert Rohde for Herman Miller in the late 1930s, this vanity brings to mind images of some of Hollywood’s biggest stars from the era. It is easy to imagine Bette Davis, Joan Crawford, or Katharine Hepburn applying lipstick or combing their hair in front of this vanity. In fact, there is a scene of Katharine Hepburn sitting in front of a modern-looking vanity (although not nearly as unique as Rohde’s design) in George Stevens’ 1942 film “Woman of the Year.” In the film Hepburn stars as a hard-working professional journalist, named Tess Harding, who has difficulty balancing her professional life with her personal life. Tess Harding could have easily been the “modern” woman to whom Herman Miller was trying to market this ultra-modern piece of bedroom furniture.

Shown in a 1939 Herman Miller product catalog, Rohde’s vanity was designed as part of a suite of bedroom furniture (#3920) and is pictured with a plush upholstered stool. Its adjustable three-mirror arrangement would have allowed a woman to see herself from multiple angles.

The juxtaposition of rectilinear shapes with curvilinear forms shows Rohde’s fearlessness in mixing and matching various shapes and traditional and new industrial materials together. The circular acrylic drawer pulls echo the brass-framed circular mirrors. Both high-end and low-end vanities from the early to mid-twentieth century show a predilection for circular mirrors, but Rohde’s arrangement of three make this one unique.

The vanity was a standard component for almost every bedroom suite that Rohde designed for the company during the twelve years he served as a consultant for Herman Miller, [1] this one in particular exemplifying Rohde’s ability to bring together femininity and privacy with modern design.

This vanity is on display in Energizing the Everyday: Gifts from the George R. Kravis II Collection, on view from April 27, 2016 through March 12, 2017.

← Made By Many Hands
Rocking and Scrolling →