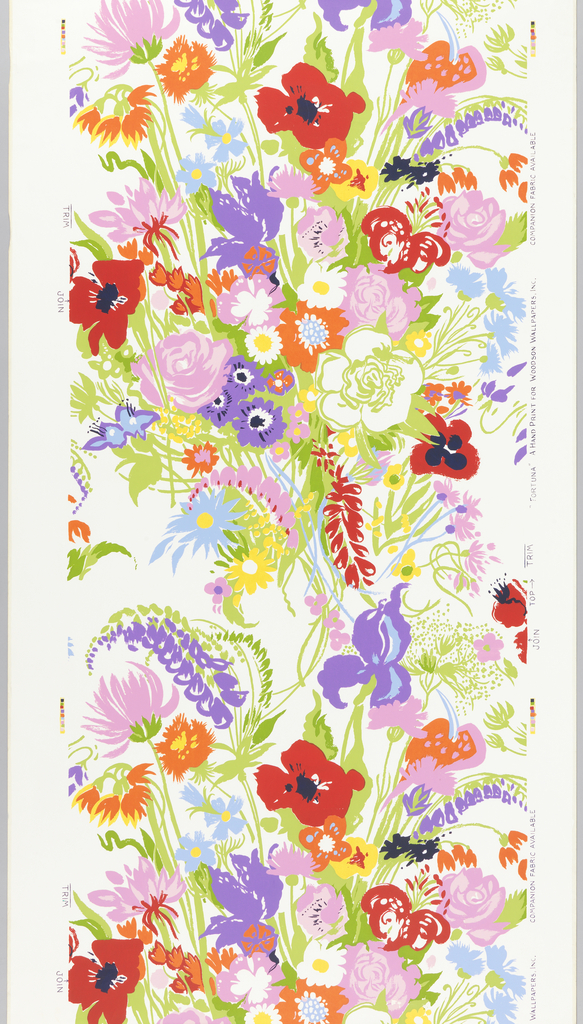 This spring is extra-special at the Cooper Hewitt because the garden is completely renovated and once again open to anyone who needs a nice place to sit on a sunny afternoon. In anticipation of fun times and fair weather, we wanted to feature this vibrant floral wallpaper that presents its own take on 1960s “flower power.” Made in 1968-69, this paper is titled “Fortuna” and is more botanical than psychedelic. It shows a riot of poppies, irises, lupins, daisies and other brightly colored blossoms exploding like fireworks from loosely gathered bouquets. The flowers are rendered in broad brush-strokes in red, orange, yellow, green, blues, indigo (kind of) and violet (definitely!) on a white ground.

Part of the “Hand Paint” series put out by the American company Woodson Wallpapers, this sidewall was actually screen printed and was marketed with a coordinating fabric. In fact, Woodson, founded in 1954, was known for launching the trend of displaying matching wallcoverings and fabrics within a room, and by the early 1960s the majority of their wallpapers could be purchased with complimentary textiles. The vogue for matching was so popular that some decorators went so far as to recommend hand-painting wooden furniture with the same Woodson pattern that covered their walls! Those who were a bit less artistically inclined were encouraged to just go ahead and paste wallpaper directly onto the furniture.

This textile was designed by one of the most famous textile designers of the 1960’s-2000’s. Paolo Farkas owned, operated and designed for Farkas-Ortenzi Studio in Como, Italy. He had this particular beautiful “hand” and aesthetic. He was the first one to go outside of Italy and sell designs in the USA, Australia, Japan, Europe and sometimes in Latin America. HeH

Hi, the beautiful picture of the person who did it is just brilliant, these masterpieces adorn our home, but not everyone has the opportunity to buy such beautiful paintings with flowers, but everyone has the opportunity to please their loved ones, so if you decide to please, flowers are a very nice gift to make your family happy. close people, then use the flower shop for you, we have the best price of flowers, which meets our high standards and ensures that your bouquet will look as beautiful as on the site.