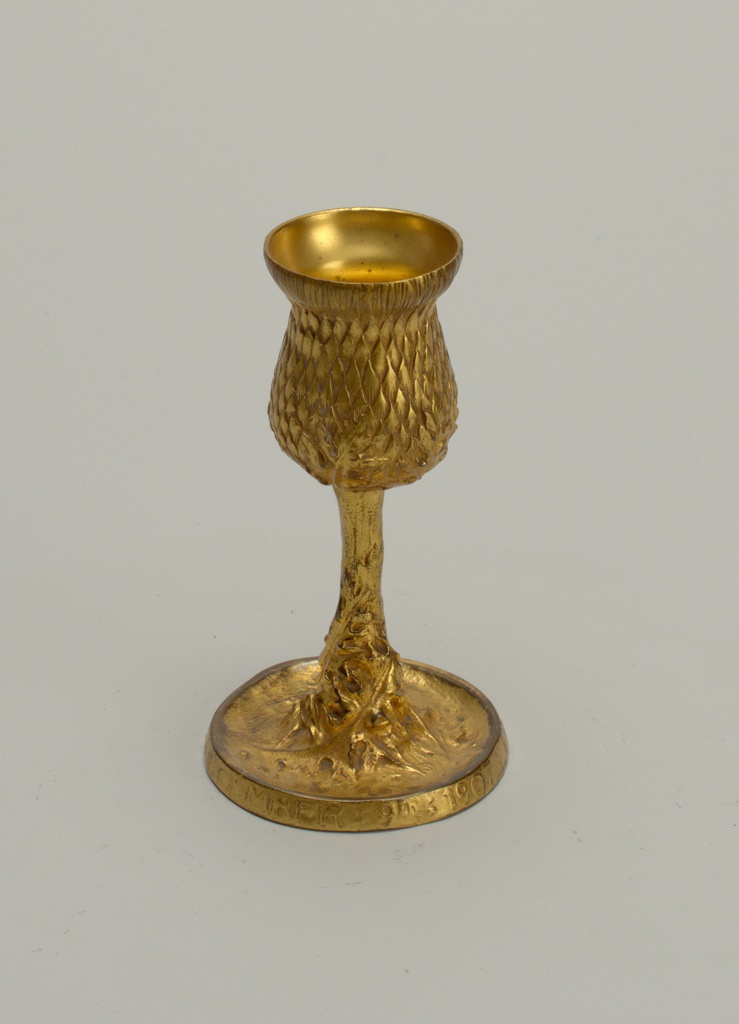 This gilded goblet was made for a special dinner in honor of Andrew Carnegie given by the Engineers’ Club of New York on December 9, 1907. The name of the club and the date of the dinner can be seen along the edge of the goblet’s base. Carnegie had donated $450,000 for the organization’s new twelve-story clubhouse at 32 West 40th Street in New York. Founded in 1888, the Engineers’ Club was the first social organization for the field at a time when engineering was particularly significant to the industrial and economic development of the city and the country at large. Andrew Carnegie was a member along with other prominent figures including Thomas Edison, Cornelius Vanderbilt, Nikola Tesla, and Herbert C. Hoover. The architectural firm Whitfield & King won the design competition for the building with a Renaissance revival style structure offering 66 sleeping rooms in addition to public and private spaces. The amenities of the clubhouse prompted the membership numbers to nearly double in the building’s first year. The clubhouse still stands today along the edge of Bryant Park and as of 1979 has been converted into residential apartments.

Made by Tiffany & Co., this goblet is an example of the firm’s high quality custom work for a private client. The vessel’s thistle shape was chosen in homage to Carnegie’s Scottish ancestry. The naturalism in the rendering of the thistle flower’s petals and leaves suggests that Tiffany & Co.’s design director Charles Lewis Tiffany probably turned over the design for this commission to his son, Louis C. Tiffany, who may well have produced it at Tiffany Studios on behalf of Tiffany & Co. Both father and son drew on nature whose intrinsic beauty guided their designs in color and form. Sketching outdoors from an early age, Louis was encouraged by his father to observe nature first-hand. This goblet along with an array of flower and plant forms in glass and metal designed by Louis C. Tiffany are currently on view in Passion for the Exotic: Louis Comfort Tiffany and Lockwood de Forest.

One thought on “Gilded Goblet”

I am cleaning my 95 year old Moms apartment snd we have one of the Tiffany goblets. If you could email me I’d greatly appreciate it. We don’t know the value, and wonder if it should be in a museum.
Thanks so much,
Nancy Hosford
nancyhosford@gmail.com