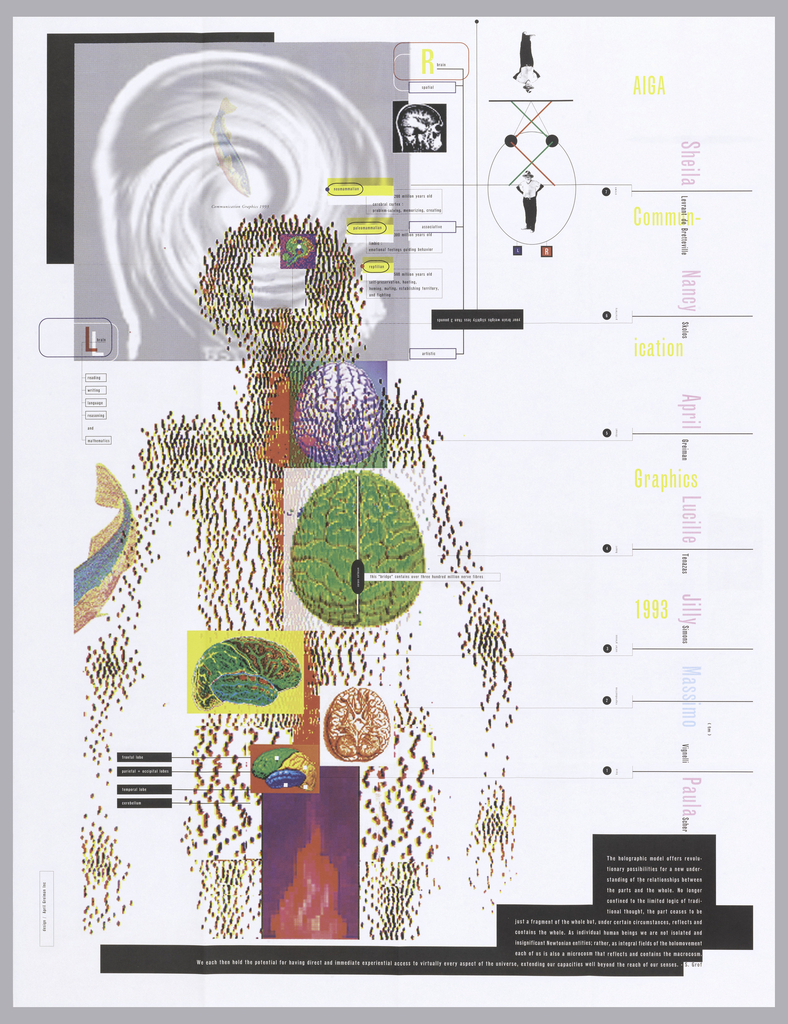 “I believe that all designers come to a task with a unique way of ordering that is particular to their past experiences, and perhaps even their genetic structure,” says maverick designer April Greiman. “As a student I became aware of these tendencies; began to trust and develop them. Ideas, hunches and personal visualizations result for that integration of mind and body. Intuition is a kind of non-thinking that cuts through socialization, and is therefore our highest form of intelligence.”[1]

Trained during the 1960’s at the Kansas City Art Institute and later at the Allegmine Gewerbeschule, working under legendary graphic designers Armin Hoffmann and Wolfgang Weingart, Greiman, developed a strong modernist approach to her work.[4] Though she practiced and taught in New York during the early 1970s, it wasn’t until she moved to Los Angeles and bought her first Macintosh computer in 1984 that she really started to define her style.[5] Weingart described Greiman’s post-grad work as “ideas developed at Basel [taken] in a new direction… [with the use] of color and photography.”[6] Her digitally rendered works were characterized by overlapping forms, diagonal perspective lines, and gestural strokes.

Greiman threw all conventions out the window while creating a new visual language that unashamedly paid homage to computer generated design, bridging the divide between modernist and postmodernist design practice.[7] She achieved this through the collage of pixelated type, video stills, and graphic symbolism.[8] Working with early drafting programs like MacWrite, MacDraw, FullPaint, and PageMaker, she spent much of the 1980s developing a range of projects, including packaging, corporate identities, and television commercials.

Greiman’s style matured in the 1990s, when her work began to reflect the aesthetic range and possibility of the internet.[9] “Things are becoming more holistic in my work so maybe that gives the feeling of being purer or simpler,” she explained in a 1994 interview with Creative Review’s Howard Rombough. “A lot of simple things can be profound…I’m reductivist with individual things, but then I end up putting a plurality of messages, objects, subjects into a piece.”[10]

This new approach is evident in Greiman’s 1993 AIGA Communication Graphics poster design. Reflective of her own work and of broader industry trends at the time, this poster equates digital and virtual innovations with physical and spiritual human energy.[11] Colored brains representing the seven chakras—energy points throughout the body—are positioned atop a human figure, in a visualization of consciousness beyond physical evolution. Greiman’s poster demonstrates her evolving conceptual process in graphic designs, as well as photography and installation projects.