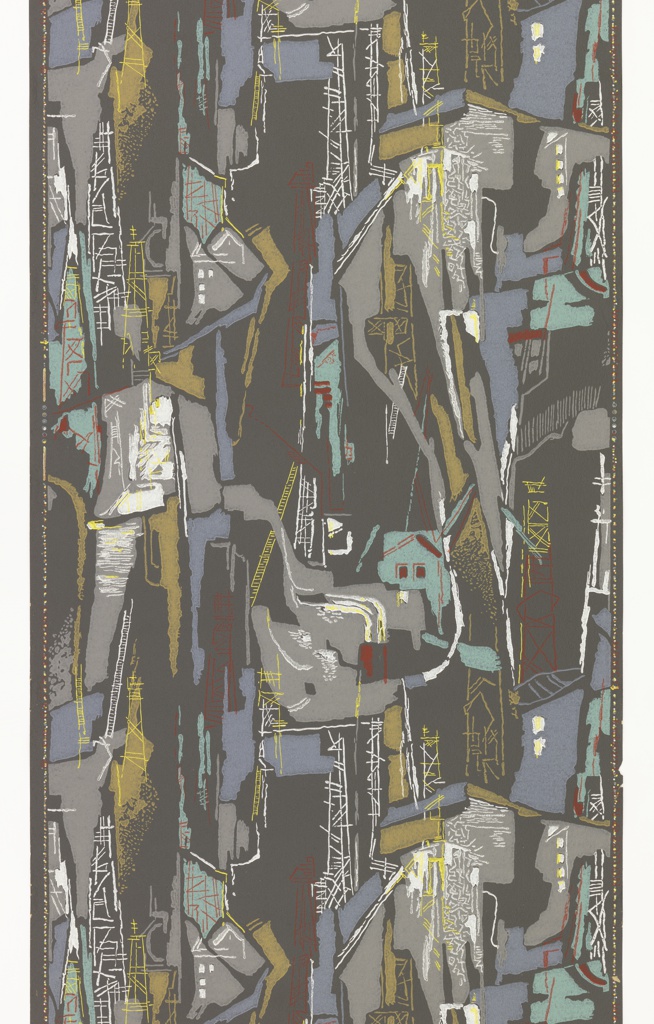 In the mid-twentieth century, German wallpaper company Rasch marketed wallpapers designed by noted contemporary artists to the American public. The product line was called the “International Artists Collection,” and appealed to consumers who wanted their homes and offices to reflect cutting edge of contemporary art. Explaining the creative motivation behind this partnership of artist and industry, company director Emil Rasch wrote:

“Contemporary painting has had a powerful influence on every aspect of production for the home, including what goes on the walls and ceilings. Abstraction, illustration, spatial arrangements, literary representation—in fact, all forms and all styles meet in a harmonious concert of color, mood and movement.”

One of the many artists contracted by Rasch was the established French modernist painter Jean de Botton (1898-1978), who had settled in New York after spending time with the French army in Morocco during WWII. Widely traveled, classically trained at the Ecole de Paris, and an impassioned believer in the power of color, de Botton delivered sophisticated abstract patterns. Rasch’s “International Artists Collection” catalogue noted “Temperamentally akin to Matisse and Braque, he has infused a characteristic juxtaposition of color, mood and rhythm into his Rasch designs.”

This sidewall was created by de Botton for Rasch c. 1950, and left as a bequest to Cooper Hewitt by the artist. Titled “Mexico,” the design doesn’t reflect the familiar trope of Aztec-inspired zigzags, but instead captures the rhythm of the tangled, vertical landscapes and urban sprawl of a twentieth-century Mexican metropolis. Scaffolding, roofs and housing facades are rendered in thin lines and broad brushstrokes, and stacked in chaotic, overlapping columns. Light blues and yellows stand out with muted reds against a gray backdrop, capturing the mood of the brightly colored, dust-covered homes that creep up the mountains surrounding Mexico City.

← The Liberator
Addition By Subtraction →