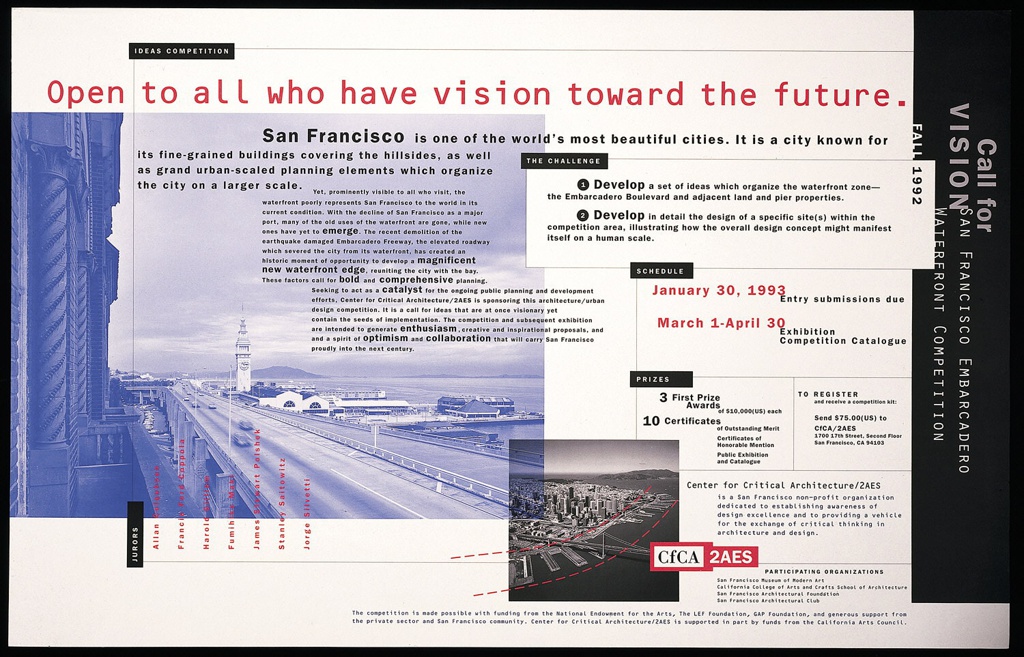 San Francisco is the city veiled in fog, surrounded by the Pacific Ocean, known for its precipitous hills. Now, more often than not, the city is uttered in the same breath as Silicon Valley and skyrocketing rent prices. Those who have left their hearts in San Francisco at one time or another, may be astonished to learn that the a double-decker freeway once encircled the city’s downtown area, separating the city from its glistening bay.

This freeway, the California State Route 480, also known as the Embarcadero Freeway, was irreparably damaged during the Loma Prieta earthquake in 1989, and  the elevated roadway was razed. One year after the demolition of the freeway, 2AES: The Art and Architecture Exhibition Space—the city’s alternative exhibition space modeled after New York’s own Storefront for Art and Architecture—launched a competition to envision how the Embarcadero could be transformed. Through the proposals gathered in this competition, San Francisco’s waterfront could again become the intimate linkage point between city and bay.

Enter AIGA medalist Lucille Tenazas, whose “Call for Vision” poster immortalizes this pivotal moment. As one writer noted in the San Francisco Chronicle of the subsequent competition, which drew more than 200 entries, the demolition of the Embarcadero Freeway, “might be marked by future historians as a turning point in a revolt of Americans against the tyranny of the automobile, a recognition that there are other human needs than the need to be at the steering wheel of a car hurtling down a freeway at 60 miles per hour.”

One can’t help but imagine the layered, often hidden-in-plain-sight, and now erased histories of San Francisco in the relationship between photograph, text, and type of Tenazas’s signature style, epitomized here in this poster.

[1]  Gilliam, Harold. “Quest for Vision: A San Francisco Waterfront Design Contest Brings out the Wild, the Weird and the Wonderful in Urban Design — plus One Amateur Judge among the Pros.” The San Francisco Chronicle (San Francisco), March 7, 1993. Accessed March 12, 2016.

← Decorative Deception
Helen Who?? Her Life as an Industrial Designer (Part Two) →