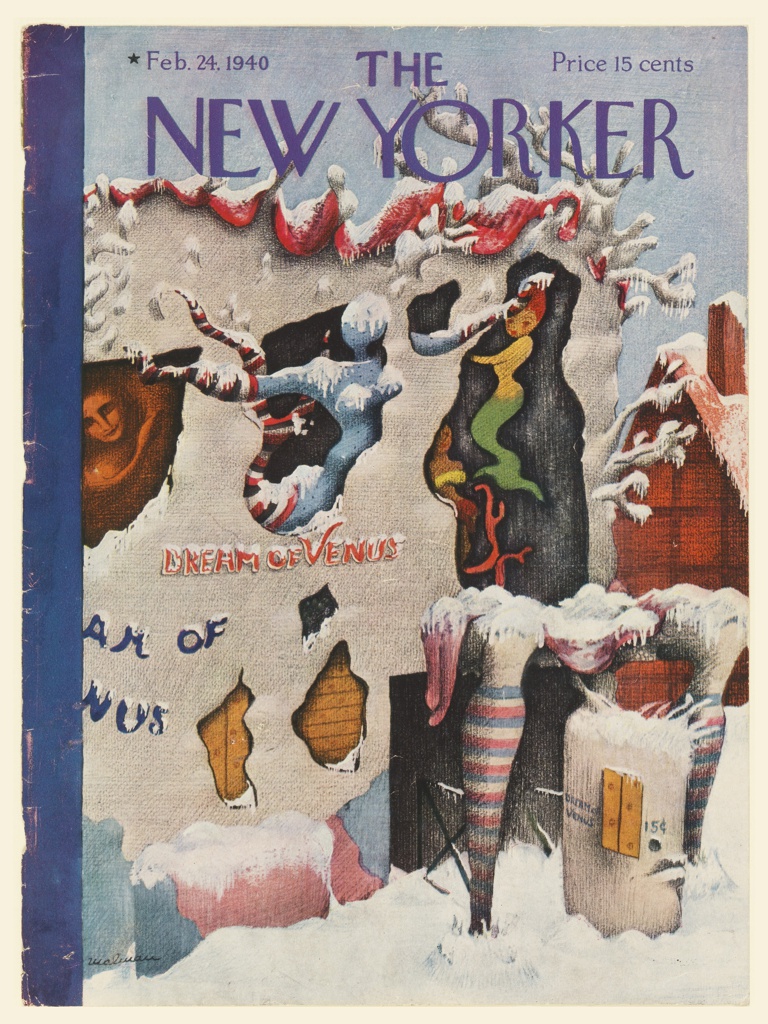 Nudged in a single exuberant moment between a decade of the Great Depression and the looming threat of World War II, the 1939 World’s Fair is popularly thought to have promoted economic prosperity through technological advancement. But it was also an important avenue for artistic expression. Spanish surrealist artist Salvador Dalí (1904-1989), who garnered attention within the New York art scene starting in the early 1930s,[1] mounted his “Dream of Venus” funhouse pavilion within the fair’s Amusement section.[2] The unconventional display was rife with voyeuristic displays[3] and showed the artist’s intention to blatantly contradict the fair’s future-forward theme. Artist Christina Malman echoed Dalí’s cheeky sentiment in this February 1940 New Yorker cover, depicting the pavilion as a snow covered ruin bursting from its seams.

Initial plans called for explosive giraffes and fish-head covered reproductions of Botticelli’s Venus.[4] Though not all of Dalí’s proposed elements came to fruition, most were realized through a scenography that interpreted the Renaissance female figure. Botticelli’s Venus was directly represented as part of a protuberant facade while live tableaus playing on the iconography of the nude woman were displayed in the interior.[5] A fish-head-shaped enclosure became a ticket booth set between a ‘spread leg’ entrance.

Entering the pavilion, visitors were first exposed to a scene depicting a lying Venus. A nude model reclined on a thirty-foot-long satin-bed with a canopy of rubber telephones above. Dalí’s main sponsor was rubber manufacturer W.M. Gardner, which explains the use of the material throughout the pavilion, including in two glass enclosed swimming pool scenes. A submerged mannequin painted in a piano key scheme was juxtaposed with scantily-clad performers swimming throughout the aquatic scene. Instead of the classic use of fig-leaves or hair for coverage, Dalí opted to use a rubber lobster. In the Freudian terms Dalí was exploring at the time, this risqué scenario was a metaphor for the male subconscious.[6]

The “Dream of Venus” pavilion was Dalí’s first inhabitable work. Set within the context of the futuristic “World of Tomorrow”-themed 1939 World’s Fair, Dalí’s “Dream of Venus” pavilion came as a sharp contrast. His use of organic architecture was a clear affront to the predominant use of streamlined Art Moderne architecture.[7] Dalí explored commercial culture unashamedly in the pavilion design as well, a recurring subject in the artist’s work that the surrealist critic André Breton once critiqued vehemently.[8]

The organic, fluid lines of Dalí’s “Dream of Venus” pavilion are clearly evoked in Malman’s drawing for the New Yorker cover. Though little is known about the British-born artist’s life and work, personal accounts from fellow New Yorker cover artist Arthur Getz mention her sense of humor and leftist leanings, something made quite apparent in this cover illustration.[9] When considering what Malman might have been try to convey or satirize with this cover, there are two possibilities. First, the blending of white snow with the formless white facade of Dalí’s pavilion is an aesthetic commentary. With cracks in the facade revealing a wood framed structure underneath, this notion is furthered by the idea of theatrical deception. Second, Malman might have been making a statement about the seedy displays inside. This is evident in her depiction, as cracks in the facade reveal different ‘swimming’ figure. Her real intention remains a mystery.