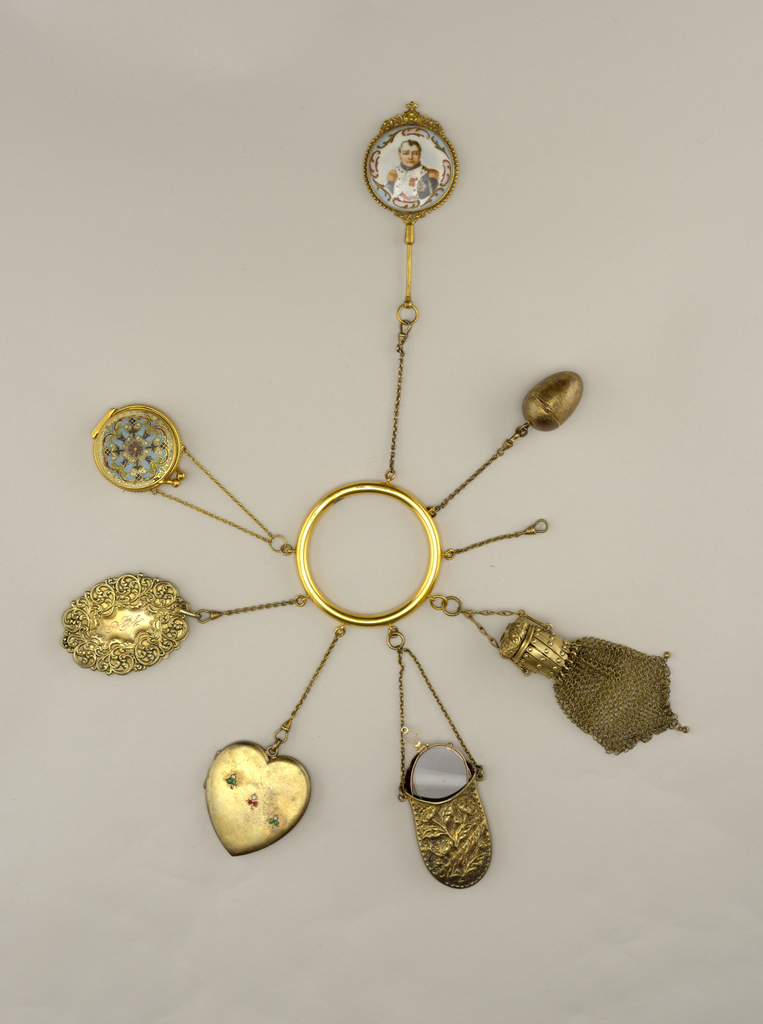 Posted by Elizabeth Caroscio on February 16, 2016

The Cooper Hewitt’s American Chatelaine (ca. 1860) may seem like a completely foreign object at first glance but upon further study, it is more familiar than it might seem. If we look at the history of chatelaines we see that they are part of an archetype of tools to carry on one’s person that is a parallel to modern day Smartphones and Swiss Army Knives.

Ever since prehistoric times, people have hung practical items from their waists to ensure that they would always have the useful implements they needed in their daily lives. Over time, these objects developed into what became known in the nineteenth century as the chatelaine. This chatelaine from the Cooper Hewitt’s collection is one of the rarest forms of a chatelaine, a ‘wrist chatelaine.’ It was meant to be worn as a bracelet around a woman’s wrist, although it could have also been attached to a belt or a hook around the waist. The bracelet has eight delicate chains around it, and seven of the eight chains have objects attached to them. Each object would either be useful, such as the enameled pincushion holder, or personal, like the heart shaped locket; and each object can tell us a lot about the woman who owned and assembled it.

Today, cell phones and Swiss Army Knives are used in much the same way chatelaines were used in the nineteenth century. All three of these objects are meant to be on one’s person at all times and each have tools attached to them that help us with our everyday lives. Just like someone looking through a Smartphone can tell a lot about the life that the person who owns it leads, this chatelaine gives us many glimpses into the everyday life of its original owner. We can tell that this woman sewed often, needed eyeglasses to read, and that she cherished two black and white photographs of a man and a woman, among many other things. Above all, this object has the power to draw people in because it seems like an unknown object; however once learning more about its history we see that this object is connected to many objects we use today and was highly valued by the woman who originally owned it.

Elizabeth Caroscio is a candidate in the M.A. History of Design and Curatorial Studies program offered jointly by the Parsons School of Design and the Cooper Hewitt, Smithsonian Design Museum. She is a Fellow in the Registrar Department of the Museum.

← An Art Nouveau Partnership in the Belle Époque
Woven to Shape →

2 thoughts on “Design Within Reach”

Can you please describe the object better! What are the function of ALL the pieces, and why would an American chatelaine have a portrait of Napoleon? Thank you.

I conducted the original graduate student research on this chatelaine and would like to note that it was not used as a bracelet, nor was it ever meant to be. The chatelaine would hang from a clip attached to the waist of the wearer.

The limoges portrait of Napoleon was a souvenir from France (circa 1900).
The dance cards were made of cellulose, and had ghost images of names long forgotten.
The egg does not open, and is purely decorative.
The spectacles were purchased individually from the spectacle holder, yet fit perfectly.
The missing accessory was most likely a small gilded pencil, which would have been sold alongside the dance cards in many catalogs during the era.