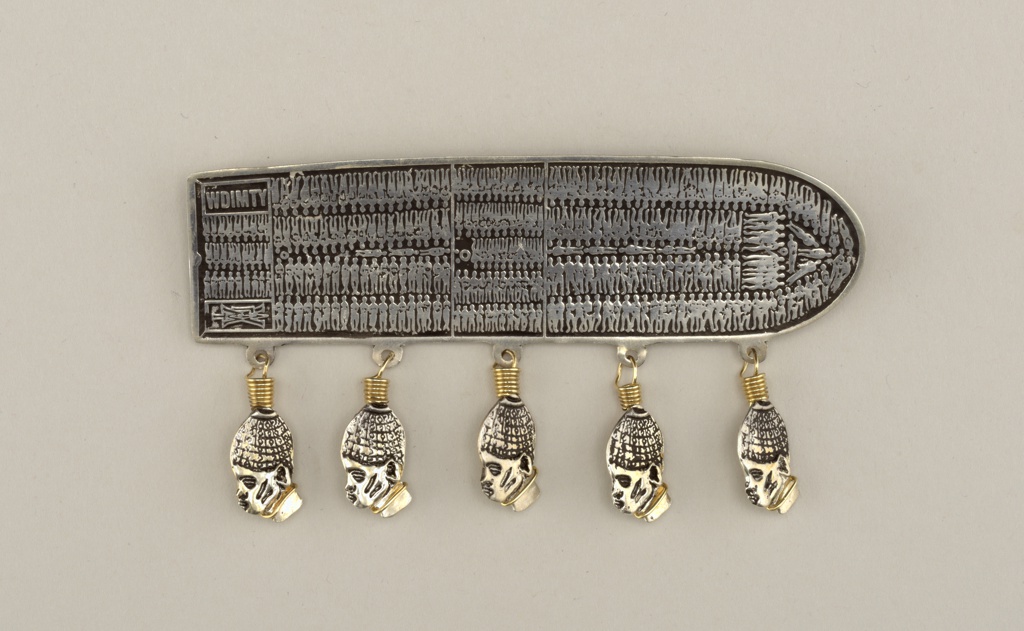 Born in the Bronx, Phyllis Bowdwin is an activist, writer, educator, mixed-media artist, and designer. Inspired by her African ancestry, Bowdwin made this brooch that depicts in diagrammatic form the hull of a slave ship and the arrangement of its tightly packed human cargo during the Middle Passage. In this version, five heads of African slaves in profile hang from metal nooses off of the brooch’s lower edge. In another version, also in the museum’s collection, five cowrie shells dangle in a similar orientation. The number five is a symbol of justice in African lore. Bowdwin has made this pin as a history lesson and a memory of the African American legacy.  The designer has shared, “I decided to make the pin because I was disturbed that nothing had been done in terms of erecting a monument or permanent commemoration of the time of the middle passage.” [1]

Bowdwin’s brooch reproduces a famous image of the Brookes slave ship, drawn in Plymouth, England in 1788 and made widely available by booksellers and as a broadside to further the abolitionist cause. The Brookes sailed the passage from Liverpool via the Gold Coast in Africa to Jamaica in the West Indies. The same image also reappeared in The Rise, Progress and Accomplishment of the Abolition of the African Slave Trade by the British Parliament, a book by Thomas Clarkson that was published in 1808 and details the abolitionist movement in England. Ms. Bowdwin said, “It is a classic image, a picture that was used over and over again, because it symbolized that whole period.” [2] This brooch exemplifies the role of jewelry as a poignant communicator of social history.

← Fashion Fusion
In the middle of evolution →

4 thoughts on “The Middle Passage Brooch”

Good Morning,
My name is Marie Cobb..How are you?. God is so awesome..You do not realize this but I have been looking for Ms. Phyllis Bowdwin for so many years. We kept in touch for awhile but somehow lost connection..The reason why, I attend St. Paul Community Baptist Church in Brooklyn, N.Y. . We are doing a Suite called “MAAFA” for 22 yrs this September 2016. Ms.Bowdwin was a Sista who came in 1995/1996 and she would sale her jewelry. The Middle Passage African Holocaust Maafa Jewelry (she had a magazine) the response from the people loved her work. Some of the sistas are still so much interest in her jewelry. This is the purpose why I am sending you this email. How can I get in touch with her.. It’s mostly her earrings with the slave ship and one cowrie shell at the bottom of the earring. She had small, medium and large. A few sisters lost one earring and OMG have we cherish those earrings, just hurt us so bad when that happens.. Everyone keep asking me (do you hear from her, do you know where she is at, I need a pair of earrings, I lost my earrings).etc.. I still have and wear my earrings (Thanks be to God) that’s when my sistas approaches me and ask me about the lady who sold the jewelry..
If someone would get back to me with some information I would so appreciative.
Thank you all so much for all that you do..
Have a Blessed day.

Hi Marie. Thank you for reading our blog and for your response. I am happy to know that you and your friends own jewelry by Phyllis Bowdwin. Unfortunately we do not have current contact information for the designer. But I will be in touch if we do happen to connect. Thanks!

I am the author of the 1994 New York Times story about Ms. Bowdwin. I recently found her on Facebook. I have added the link below:

Hello
I been lookin’ for you!!!!!!
I have a printed image of this brooch, and I would love to have a real one.. I am a bookworm and collector of anything African.
I’ve got some awesome items. A real slave bracelet, images and old paintings, BOOKS************ I want to gift them to a school for young black children. Please let me know if this brooch is available anywhere.
Thank you
Beverly Trahan
beverlylaketrahan@gmail.com