Which Came First: The Product or the Egg? 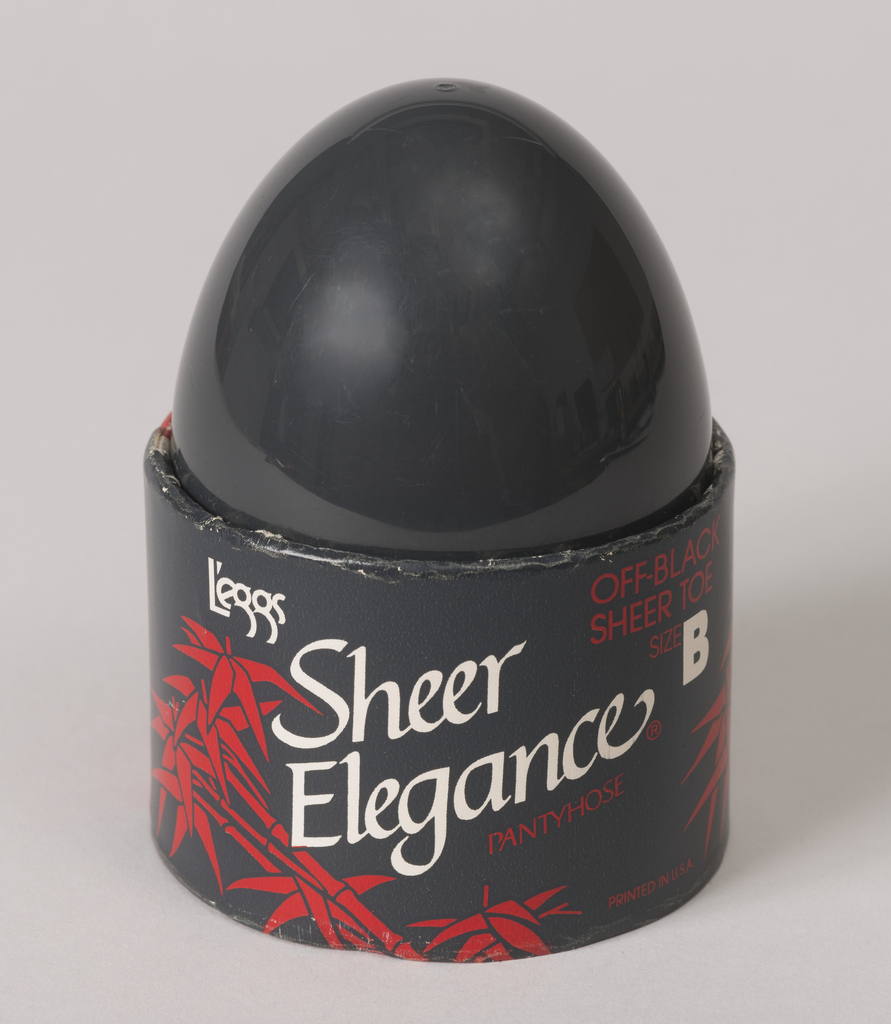 The plastic shine of the L’eggs egg pantyhose package is instantly recognizable to anybody who browsed grocery, drug, or convenience store shelves during the 1970s and ‘80s. First introduced in 1969, L’eggs brought women’s hosiery out of the specialty shop and to the mass market, providing women with an alternative to the frippery of garters and stockings and simultaneously creating a merchandizing phenomenon that changed not only the hosiery industry but those of package design and visual retailing.

Cooper Hewitt’s L’eggs egg boasts a black ovoid dome nestled into a cylindrical cardboard collar printed with product information; the hue and size of the pantyhose are easily legible, stacked together on the right of the package. The L’eggs brand name (complete with egg-inspired lower case g’s) appears at the top left of the design, while the style name, “Sheer Elegance,” is articulated in white script across the middle. Bamboo stalks spray across the label at a diagonal, their red knuckles and leaves silhouetted against the black cardboard, insinuating the exotic luxury of wearing a material that “looks and feels like real silk from the Orient.”

With Sheer Elegance, L’eggs (a division of Hanes) became the first company to offer non-support pantyhose made with spandex to give the appearance and feel of silk in a more comfortable, form-fitting style. It is just one of the many lines created by L’eggs, which in the 1970s redefined women’s hosiery and ultimately introduced a novel approach to branding, packaging, and retail merchandising that matched the innovation of the product it promoted. Prior to 1959, women’s hosiery was a complicated system of straps: one wore a garter belt from which straps hung and clipped to thigh-high stockings. Pantyhose provided a more efficient, all-in-one alternative to the garter belt and individual stockings. Additionally, prior to the conception of L’eggs, hosiery was shaped by stretching material over metal molds and applying heat to cause the hose to take on the silhouette of the ideal female leg. Of course, pre-shaped stockings could not accommodate the figure of every woman who wore them, so L’egg’s super-stretchy, form-fitting designs were refreshing not only in their exceptional comfort and durability, but also in their elastic generosity that appealed to women of all body types.

Such a product demanded equally inventive branding and packaging. The L’eggs name and egg concept were conceived by the graphic designer Roger Ferriter, then employed by the graphic design firm Lubalin, Smith, Carnase (whose notable designs include logos for Pepsi, PBS, New York University, and CBS, among others); Ferriter would go on to teach at New York’s School of Visual Arts, where he shared the L’eggs egg origin story with his students. The anecdote describes a flustered Ferriter who, on the morning of his marketing and package design pitch to Hanes, decided his current scheme wasn’t quite creative enough. Ferriter, hoping to be inspired by the product by experiencing it in a new way, tested pantyhose’s compactness by scrunching them up in the palm of his hand. Upon considering the wad of hose in his clenched fist, Ferriter was struck by the idea that the package should resemble an egg, “nature’s perfect package, a symbol of newness and freshness,” which, pun-ily enough, happens to rhyme with “leg.” He added an apostrophe for a “touch of French flair” and this jeu de mots gave rise to one of the most iconic brand logos and package designs to grace grocery shelves in the twentieth century.

The packaging went into production and was available nationally by 1971 (Sheer Elegance was introduced in 1973), and consumers immediately embraced the egg, making L’eggs the best-selling pantyhose brand in the country. The product’s success was bolstered by the brand’s novel “direct-to-store” delivery system that supplied stock to merchants on consignment; this meant that retailers didn’t pay until the product was sold, ensuring that product was always visible and available to customers. L’eggs relied on a predominantly female sales and visual merchandising corps to monitor stock and ensure that each store’s products were tailored to its unique demographic. L’eggs was the first branded hosiery to be marketed at grocery, drug, and convenience stores, where its egg-shape would have already been familiar to food-shoppers who were further seduced by the brand’s “L’eggs Boutique,” a tall, egg-shaped carousel that displayed twelve dozen pairs of pantyhose and was purposefully unsuited to holding products made by any other brand.

The production of the L’eggs egg spanned two decades, with a brief re-issue in 2014 to celebrate the brand’s “Fabulous after 40” anniversary campaign. Ultimately, however, the company did away with the capsule in 1991 in order to maximize shipping and retail shelf space, reduce consumer waste, and initiate a new generation of consumers. The new single-piece cardboard package uses 38% less material than the capsule and consists of a cube topped by a sloping plane, a thoughtful homage to the egg’s ovoid legacy. Nonetheless, countless designers and merchandisers have been inspired by the clever wordplay, capsulization, and package-specific retail display popularized by L’eggs. Through innovative product design, package design, and visual merchandising, L’eggs democratized pantyhose, making them accessible to women of all means and physiques and establishing the L’eggs egg as one of the most iconic products of the twentieth century.

3 thoughts on “Which Came First: The Product or the Egg?”

My mother did market research on this product before the egg was decided on. I remember that she would walk door to door in different neighborhoods, showing people different packaging designs and asking what people thought of the packaging. One of the alternatives was a small brown bag, like a lunch sack. I can’t remember the third design, and my mom is now 95 and probably doesn’t remember either. I used to play with the eggs! This article makes it sound as though the company just went with the egg from the get-go, but a lot of market research went into the final decision.

My first year in graphics design advertising school SCCC the teacher Tom told this same story with the excerpt that while presenting the product the CEO of the panty hose company remarked “I see the two birds you put on the Leggs logo”. Unknowingly the designer had made this custom typeface design but failed to see what they had done of course he immediately agreed that they put that in purposely.

Nice recap. I worked for L’eggs for many years