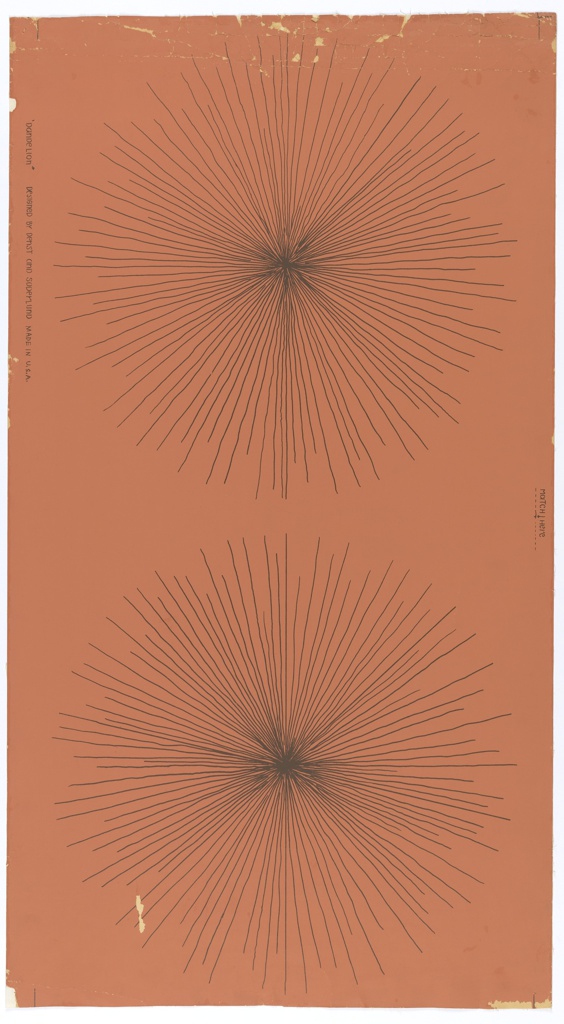 This sidewall was designed by the firm Denst & Soderlund in 1952-53. Thin, wavering black lines radiate out from a central point forming a large round motif resembling a dandelion flower gone to seed. The motif is repeated vertically on the panel, and is so large that it only takes two “dandelions” to cover the entire paper. The stylized blossoms are screen printed on a dull orange background.

John (Jack) R. Denst and Donald K. Soderlund started their company in 1947 in a tiny Chicago basement room that had previously been used for coal storage. Both men were art students whose studies had been interrupted by WWII – Soderland was shot down over Italy and spent months roaming the countryside, while Denst had a cushier gig as a radar man in Hawaii. After completing their stints in the army they went back to art, and the wallpaper design firm of Denst & Soderlund was born. They became known for designing big, bold, trendy patterns influenced by their travels, and soon their wallpapers were sought after by decorators from New York to Las Vegas. The firm split up in 1961 and Denst formed his own company, Jack Denst Designs. Denst stayed true to the style of his original firm, and continued to design and recommend large-scale wall decorations to “create the illusion of space.” Though a lifelong bachelor, Denst felt quite able to analyze women’s psychology and apply it to his wallpaper designs, noting in 1960 that wallpapers featuring the “plush reds and greens of the Victorian era” were sure to be a success because “Women are becoming increasingly conscious that they look best against a dark, rich background.” Denst also attributed his ability to foresee trends in color on a careful analysis of the color wheel, telling the Chicago Daily Tribune:

“A true color period, as opposed to a fad such as the pink and black combination, generally stays in vogue for a period equivalent to the space it occupies on the color wheel. Red and green – large segments on the wheel — can be expected to remain popular for several years after they come into usage. Orange, yellow and other colors … (are) doomed to a brief life by their small segments on the color wheel.”

← December Designgrams
Inspired by Her Travels →