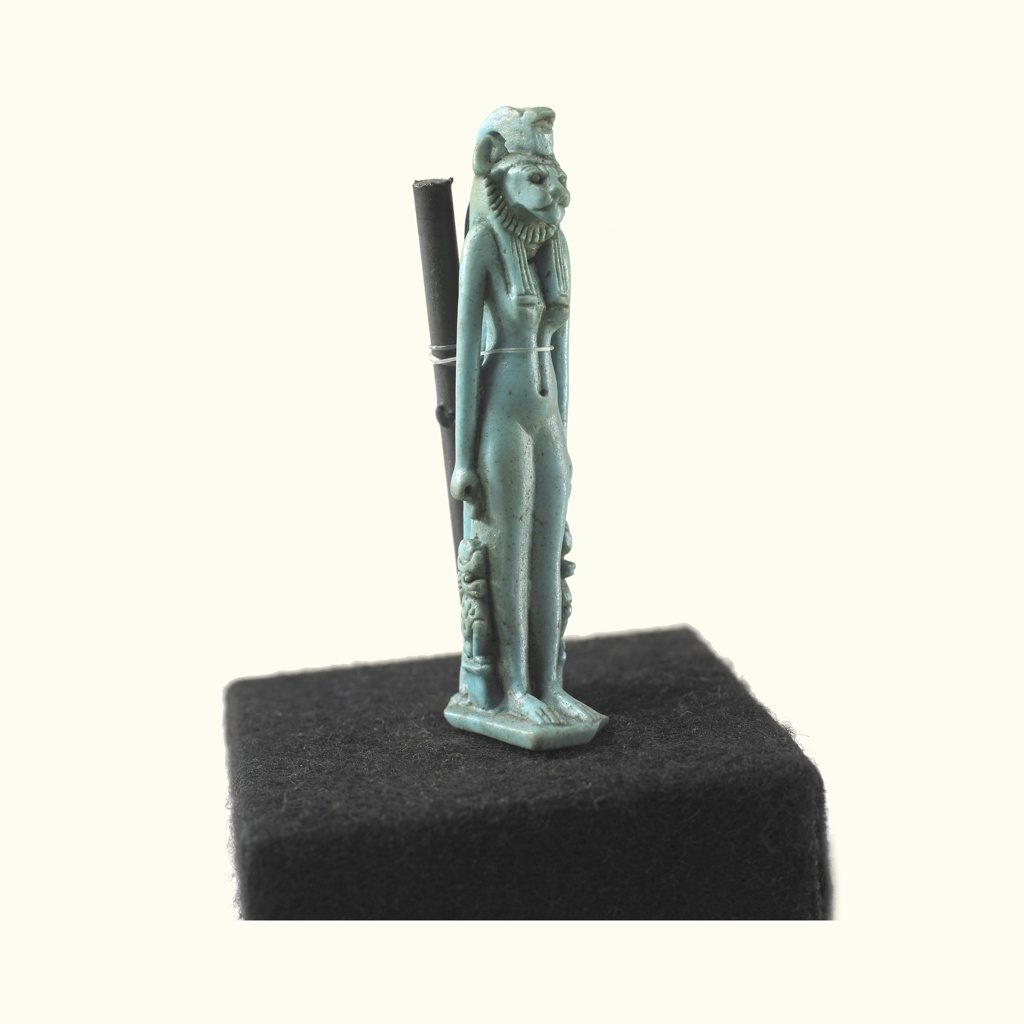 This pendant might look like it is a small, decorative trinket, but it had great religious and magical meaning to the ancient Egyptian who wore it. Depicting Sakhmet, the lion headed warrior goddess, it belongs to a group of objects called amulets that were meant to protect the owner through the use of apotropaic magic. The Egyptian’s believed that amulets were able to harness natural forces of protection and believed in many different types of magic; apotropaic magic meant that in order to ward off a threat, the user would harness something even bigger and scarier to drive away minor harm or danger. Royal and noble social classes would often make large monumental stone sculpture to ward off cosmic danger; amulets, however, could be made of a much less costly substance called faience, a blue-green glassware frit. Small, cheap, and easily transportable, amulets have been found from the earliest moments of Egypt’s Predynastic Period all the way into the early Christian era at all levels of ancient Egyptian society, but most notably the lower and middle classes.

Sakhmet was a feared and respected warrior goddess, with titles such as “She Who is Powerful,” “Mistress of Terror” and “The One Before Whom Evil Trembles,” and represented one of the many manifestations of the goddess Hathor, including the goddess Mut. Sakhmet’s amulet was used to ward off practical daily dangers, everything from plague to scorpion and snake bites.

Sakhmet is well known for the “Festival of Drunkeness,” the raucous celebratory New Kingdom festival associated with her due to her mythological connection with the ancient Egyptian New Year. The myth “Sakhmet and the Destruction of Mankind” recounts how, when the gods of Egypt overheard men on earth plotting against the sun god Ra, Sakhmet requested she be allowed to dispense justice on them in the form of a vengeful lion. However, after her initial actions quelling the uprising, she was driven mad with bloodlust. Sakhmet began an unstoppable murderous rampage that threatened the destruction of all mankind that couldn’t be quelled by the power of even the highest of the other gods. Trying to divert disaster, the other gods cleverly flooded the Nile River and adjacent fields with beer that had been dyed red with ochre. Sekhmet, in her fury, drank up the contents and quickly became placated, and decided to take a very intoxicated nap instead! When she awoke, her frenzy was broken, and she no longer pursued her destructive path and thus mankind was saved!

This story likely had ties to the annual flooding of the Nile River, which left a dark reddish, dirt deposit that was full of nutrients and allowed the ancient Egyptians to farm in the otherwise inhospitable climate. Every year the Egyptians commemorated this event as part of their New Year celebrations, which closely coincided with the annual flood season. The Egyptians would proceed into a designated area of the temple and proceed to dance, sing, indulge in intimate relations and drink until they passed out in the temple- much like the lion goddess herself! By doing so the people helped magically insure the salvation of mankind for another year as well as paid homage to power of the goddess, quite likely through the might of some strong headaches in the morning! Despite the fact the ancient New Year shifted between July and November while ours is fixed every January 1st, celebratory rituals, it seems, may not change all that much over time! Happy New Year indeed!

Ava Forte Vitali is the Project Manager for the Mass Digitization Project at Cooper Hewitt. She has her Master’s in Egyptian Art and Archaeology from the Institute of Fine Arts, NYU, teaches Intro to Egyptian Art at Adelphi University and has a regular lecture series at the Morbid Anatomy Museum  on Death and the Occult in the Ancient World. She previously worked in collection management for Greek and Roman Art at the Metropolitan Museum of Art.

4 thoughts on “A Fiercely Festive Feline”

Love these research riteups, but could you lay off the exclamation points? ^_^

Ditto: love the concept, and thanks for the information, but I also find the exclamation points unnecessary and annoying. Please do keep up the good work.

Found this detail information really great. Looking at the lovely work, hard to believe it has not been sent back to the country of origin. Would not allow that if possible, for really we would never see these fine pieces of history without the American Museums. Only in print, thanks goodness even this is on line. Thanks! I knew a young woman who used amulets of Christianity to ward off anger of an employer. 1976. St. Louis, MO. USA. Usually find this amulet and trinket type religious item in history, but people do use them today to feel more secure. Thanks for this posting. atk