Arno at the World’s Fair 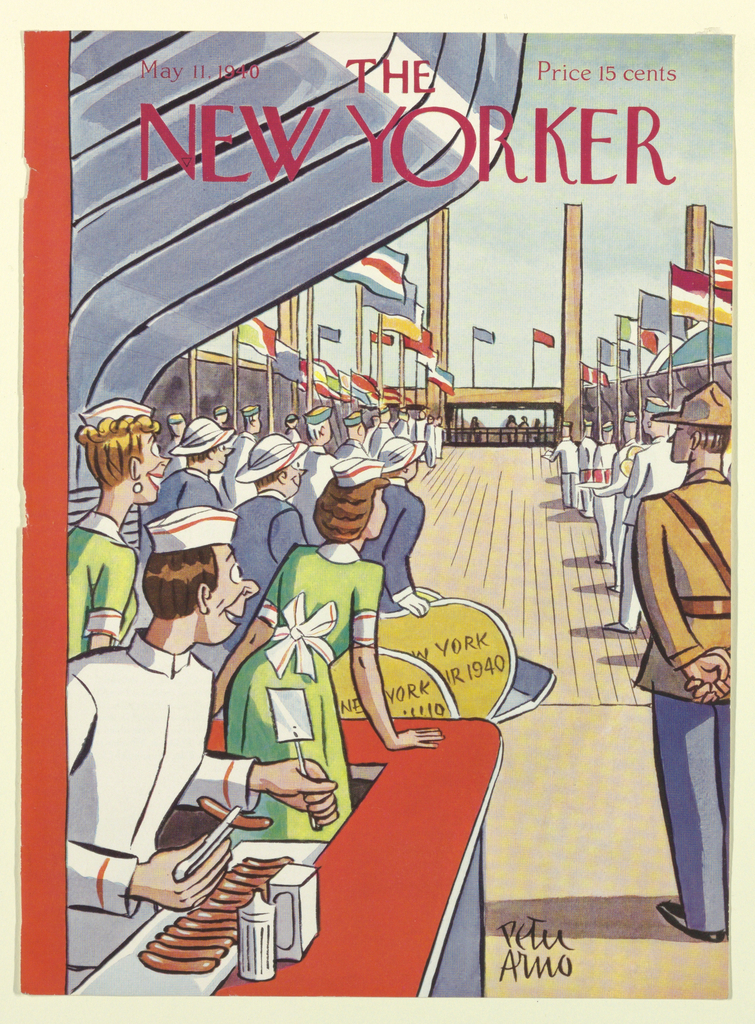 Posted by Adrian Madlener on January 2, 2016

Prolific cartoonist Peter Arno composed this cover for The New Yorker to celebrate the reopening of the 1939 New York World’s Fair in 1940.[1] The drawing depicts attendants, hosts, and representatives looking towards the fairground’s entrance in anticipation of large crowds. With the looming threat of World War II, the 1940 season of the 1939 New York World’s changed themes from “The World of Tomorrow” to “For Peace and Freedom.”[2] The presence of different flags suggests the international nature of such an event and also emphasizes American optimism in the face of global uncertainty. This exuberance can be seen in the faces of vendors as well, but one wonders if this demonstration is perhaps more in line with Arno’s and the New Yorker’s sardonic approach.

A true man of his time, Peter Arno – née Curtis Arnoux Peters Jr. (1904-1968) – drew cartoons that satirized the world he frequented.[3] His first cartoons were first published in the Yale Record,[4] where he studied and found himself immersed in high society. Working with a then fledging the New Yorker starting in 1925, the young cartoonist had to soften his touch a bit: “Up to this time I had been drawing in a rough, rugged style – heavy blacks and dramatic lighting, for I was a painter at heat, and the slick, polished pen-and-ink vogue of the era was not my dish of tea.”[5]

For him, the New Yorker was a platform for cartoons, which had a capacity to poke fun at daily life and create believable and integrated scenarios. Producing over a hundred covers and even more captioned cartoons for the magazine, Arno was instrumental in setting a precedent for the publication’s now characteristically biting yet nuanced irony. His artful designs often lampooned  the attitudes, prejudices, and humor of the New Yorker’s educated and affluent audience.[6] Arno’s covers published between the 1930s and 50s solidified the cartoonist’s place in design history by pushing the limits of technique to tell outrageous stories.

← Wallpaper in the Third Dimension
A Loom[ing] Controversy →