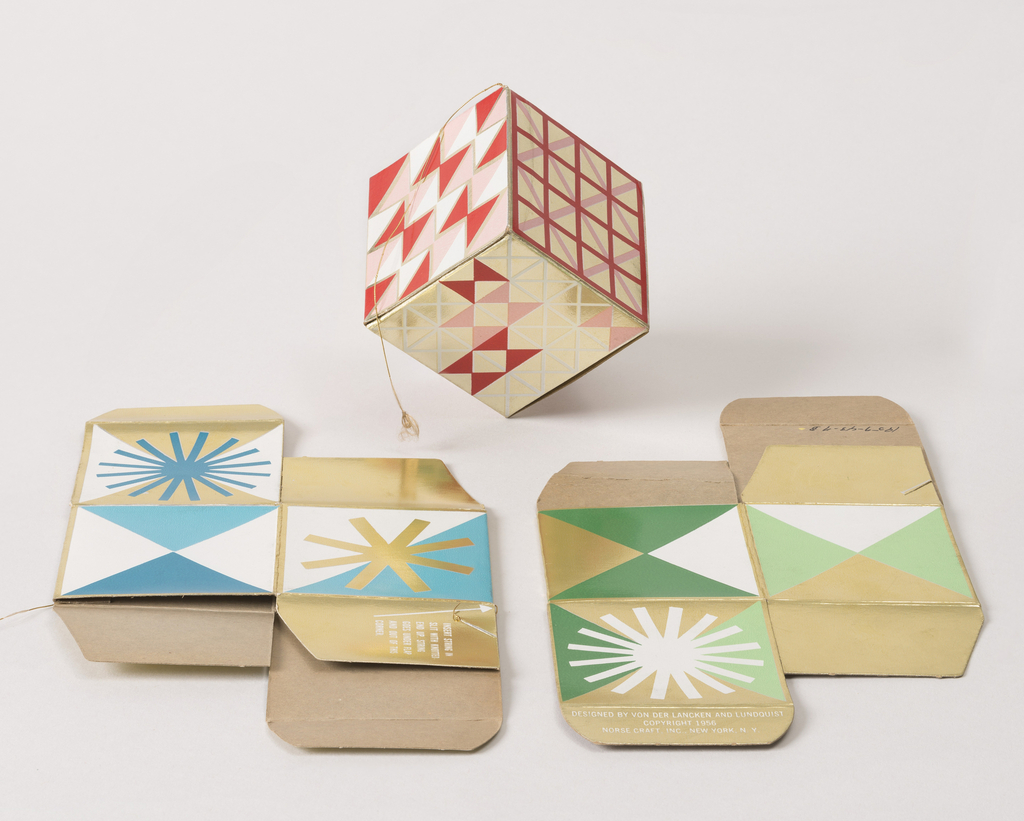 Posted by Rachel Hunnicutt on December 24, 2015

These cubic cardboard ornaments are just the thing for an atomic holiday. Designed in 1956 by Van der Lanken and Lundquist and manufactured by Norse Craft, Inc., they were exhibited the next year at the 3rd annual American Package Design Competition held at Cooper Union and were subsequently given to the museum’s collection. A modern take on traditional Christmas ornaments, these playful prisms were sold as a set of twelve, collapsed in their cardboard storage box. They were marketed as unbreakable, flameproof, washable, and able to be folded up in just seconds.

The kitschy cubes were a departure from the work of architectural firm Van der Lanken and Lundquist, best known for their lighting designs. Partner Oliver Lundquist is also remarkable for serving on the design team that created the United Nations logo, as well as for creating the original blue and white Q-Tip box.

← The Name Game
Toys in Toyland →

I have a set of these. Thirteen in total. I have never hung them on a tree. 3 have some corner damage but, the rest are in really good condition. Any idea what these may be worth? I think they came from my husbands grandmothers home. I can’t tell you how many times I have come close to throwing them away but then, I just repacked them!

They seem to sell online occasionally ebay etsy etc in the $17-25 range. If you would like to sell yours, I would love to buy – I grew up with a set in my parents home. jjkalb@gmail.com

to Rachel: I remember these in the context of the mid-century modern home my parents built with a disciple of Frank Lloyd Wright and the artisanal objects and danish modern furniture they acquired to furnish it. KItsch seems a poor term for these ornaments – they were and are clever and quite beautiful, hanging on a tree, revolving slightly to tiny drafts.