The Draw of Macaw 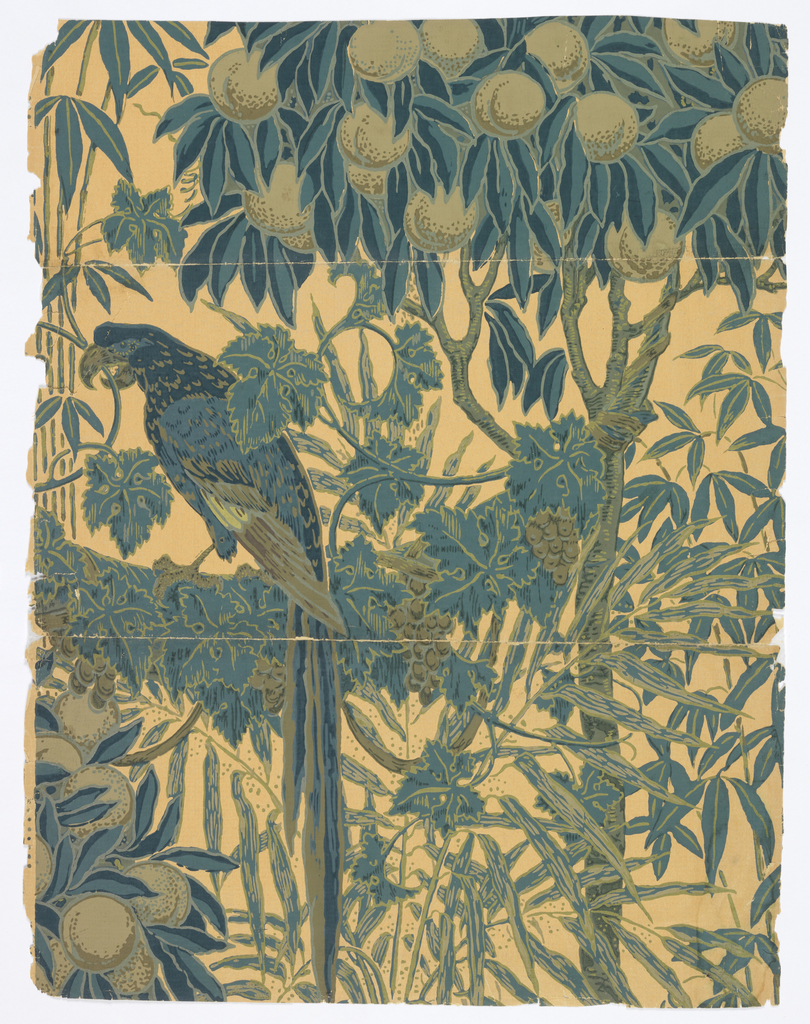 “Crane’s facile handling of gorgeous birds…has never been excelled,” gushed A.V. Sugden and J.L. Edmondson in their “History of English Wallpaper,” written in 1926. Almost a century later, their compliment still rings true. “Macaw,” designed by Walter Crane for Jeffrey & Company, was originally created as a display piece for the manufacturer’s exhibit at the 1908 Franco-British Exhibition. It features a proud macaw, perched in a bountiful peach tree and chomping down on tangled grape vines that twist through the tree’s branches. Delicate palm fronds emerge from the bottom of the panel, and from other more complete examples of this wallpaper we know that two pineapple-esque fruits are dangling just out of sight. The paper was hand-printed using 18 separate blocks, and the design rendered in shades of light and dark olive green, grays and navy blues on a beige background.

Walter Crane was the son of an artist and the grandson of a bookseller, who took the best from his ancestral heritage and became one of the most celebrated illustrators of the late nineteenth- century. Known for his now-iconic illustrations of fairytales and nursery rhymes, he was also an admirer of the Pre-Raphaelites and active supporter of Socialist movements. Heavily influenced by the teachings of William Morris, Crane believed in the creation of handcrafted, beautiful decorative arts objects as a means to improving society. Jeffrey & Company appreciated this outlook, and took pride in hiring top designers and utilizing traditional production methods to create top quality merchandise. In the case of “Macaw,” the collaboration between artist and manufacturer was particularly successful, and Jeffrey & Co was awarded a Grand Prix for their display at the 1908 Exhibition.

← Fit for a Falcon
When Civilians Guarded the Skies →