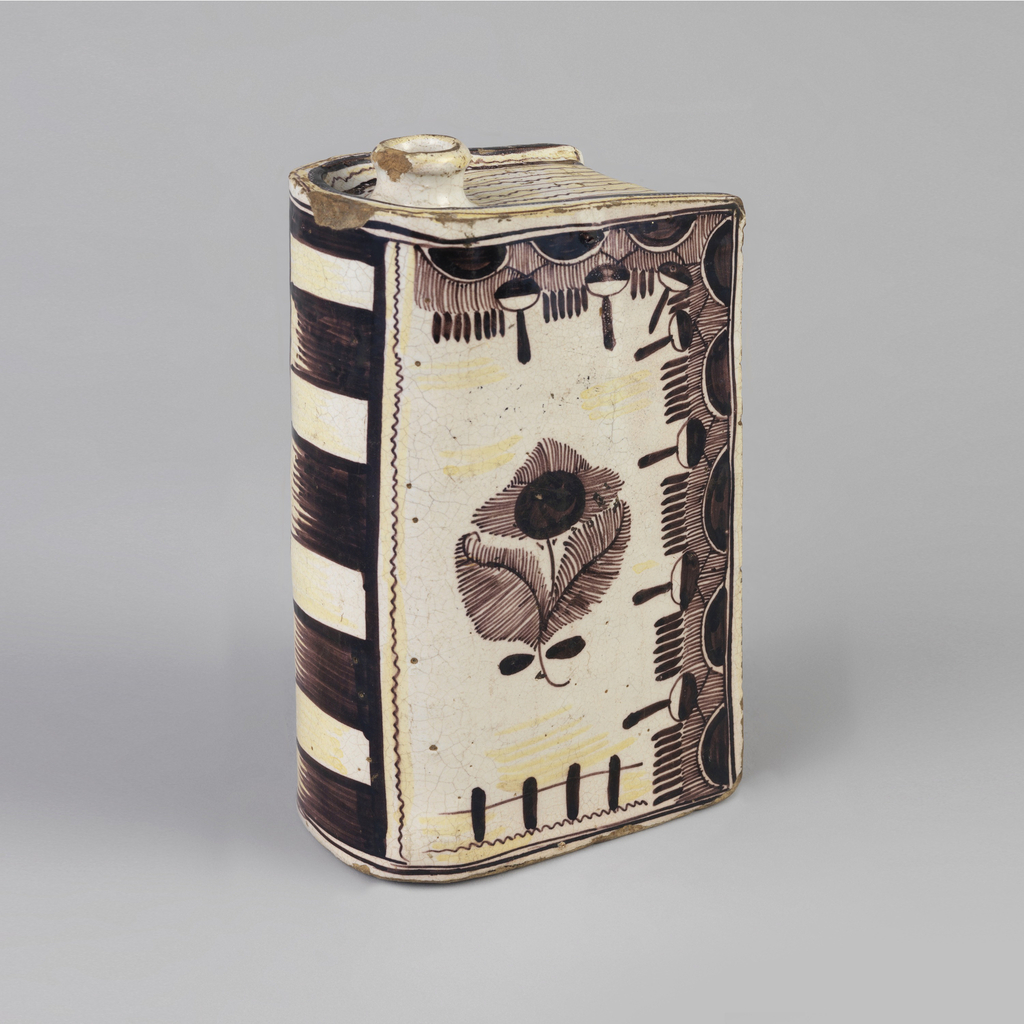 This flask is not the kind you use to sneak liquor into your family get-togethers. At 7.5 inches tall, this Swiss flask is much larger than the flask you might be used to, and it is earthenware. This glazed ceramic object from the eighteenth century mimics a book. The attention to detail is especially apparent in the designer’s decision to extend the ceramic above the “pages” to denote a separation of pages and cover. The lines of pages are drawn along the edges, the rounded spine decorated with thick, horizontal stripes, and the cover has no title but plenty of decoration. The “front cover” is adorned with a geometric border, half circles lining the edges and single strokes of lines in between and all the way around. The leaves and petals in the center are depicted with these same fine lines, and a bulbous center represents the stamen. Below the flower, at the bottom of the cover, is a wavy line with a shape on top that looks a lot like a little fence.

During the 18th century an interest in the natural world, botany and horticulture included, was on the rise. Books pertaining to these subjects with accurate illustrations were coveted collectibles. This flask is from this time period, so the form for this object could very well mirror the emerging interest in the subject, but within a utilitarian context. Charles Helme Strater was an avid collector of Swiss folk arts, this flask being a part of his collection. He frequently visited Switzerland, and on one of these trips his wife, Alice B. Strater, accompanied him despite having to “forsake [her] own garden at the height of its bloom”. Once there she was enamored with the variety of Alpine blossoms that awaited her. Alice proceeded to write an account of their trip titled “An Alpine Treasure Hunt” born of her enthusiasm, but with a scientific sensibility, naming each of the flowers in a precise fashion.

Ashley Frenkel is a Peter A. Krueger Intern in the Education Department. She has a B.A. in Art History from New York University.

← Kindly Put Those Bug Wings on the Wall
Pluck ‘Em! →