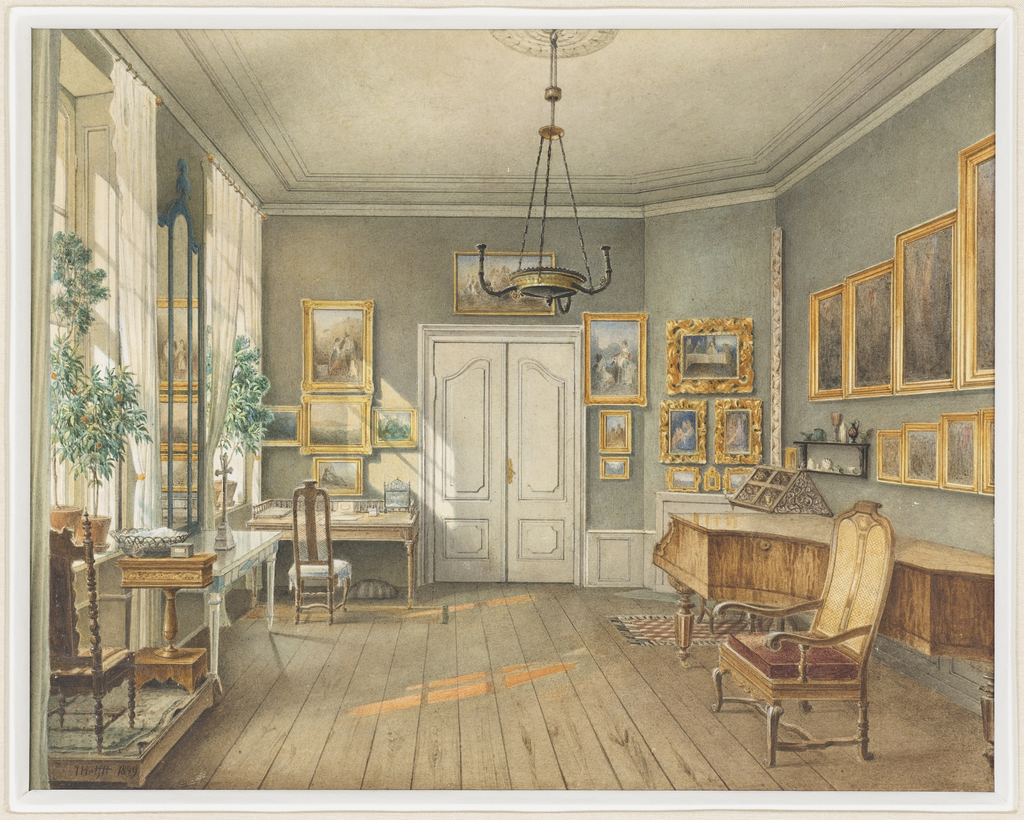 Researching a work in the collection can lead a curator to some very interesting places other than libraries. I was fortunate to have been in Berlin on May 14, 2015 which was the anniversary of Fanny Mendelssohn Hensel’s death in 1847. I had corresponded previously with Thomas Lackmann, a descendant of Fanny Hensel’s and board member of the Mendelssohn-Gesellschaft, the society overseeing all things Mendelssohn, who had invited me to an event at 3 pm in Fanny’s honor in the Dreifaltigkeit I cemetery where she and her family were buried. [i] The Gesellschaft had set up a tent next to a temporary exhibition pavilion they had constructed and attendees were treated to a reading of letters between Fanny and her more famous brother Felix interspersed with live violin and cello music by Bach, the musical idol of the Mendelssohn family. After the event, Mr. Lackmann took me on a tour of the cemetery pointing out the grave stones of Wilhelm Hensel, Fanny, Felix, and their parents Abraham Mendelssohn (son of the Jewish philosopher Moses Mendelssohn) and Lea Salomon Mendelssohn, granddaughter of the wealthy Berlin banker Daniel Itzig. Although the family was Jewish, Abraham had the family become Protestant and adopt the surname Bartholdy as many German Jewish families were doing at the time to become assimilated into the national culture. [ii]

By all accounts, Fanny Mendelssohn Hensel was a child prodigy, the equal of the brother Felix. Receiving the same musical training, they matured together as musicians, supporting each other, critiquing each other’s music and maintaining an extremely close connection throughout their lives. Due to the behavioral customs of the time, however, Fanny was prevented from having a professional career and had to limit her composing and performing to concerts at home. Early on, some of her songs were published under Felix Mendelssohn’s name. Finally in the last years of her life she developed the independence to publish her compositions.

After Fanny’s marriage to the court artist Wilhelm Hensel, the couple moved into a home on the large estate of Fanny’s parents at 3 Leipziger Strasse, Berlin. It was there that Fanny had a room devoted to her music as portrayed in this watercolor executed by Julius Helfft. Painted two years after her death following a stroke, the watercolor must have been commissioned as a tribute to Fanny. A music pavilion accommodating about 300 people was constructed in the garden of 3 Leipziger Strasse that served as the venue for Sunday concerts by Fanny and invited guests. It became a center of musical and social life in mid-century Berlin. Biographers say that Hensel and Felix Mendelssohn were devastated by Fanny’s death and suffered from deep depression.[iii]  Felix Mendelssohn died less than six months after his sister.

In 2010, the Mendelssohn Archive in the Staatsbibliothek, Berlin was able to acquire a second Helftt watercolor of the Music Room (55P111) showing a corner of the room with the piano, music stand and pictures hanging on the wall behind. Today, the music and career of Fanny Hensel are at last coming to public attention.

2 thoughts on “A Woman Uncovered”

The chair and table in the left foreground are placed on a low platform. What would have been the purpose of the platform?

I am trying to find Julius Helfft’s painting of Fanny Hensel’s music study (1849). Do you own the publishing rights for it? IF so, and I was interested, would you be able to tell me the usual fees for this. Thanks