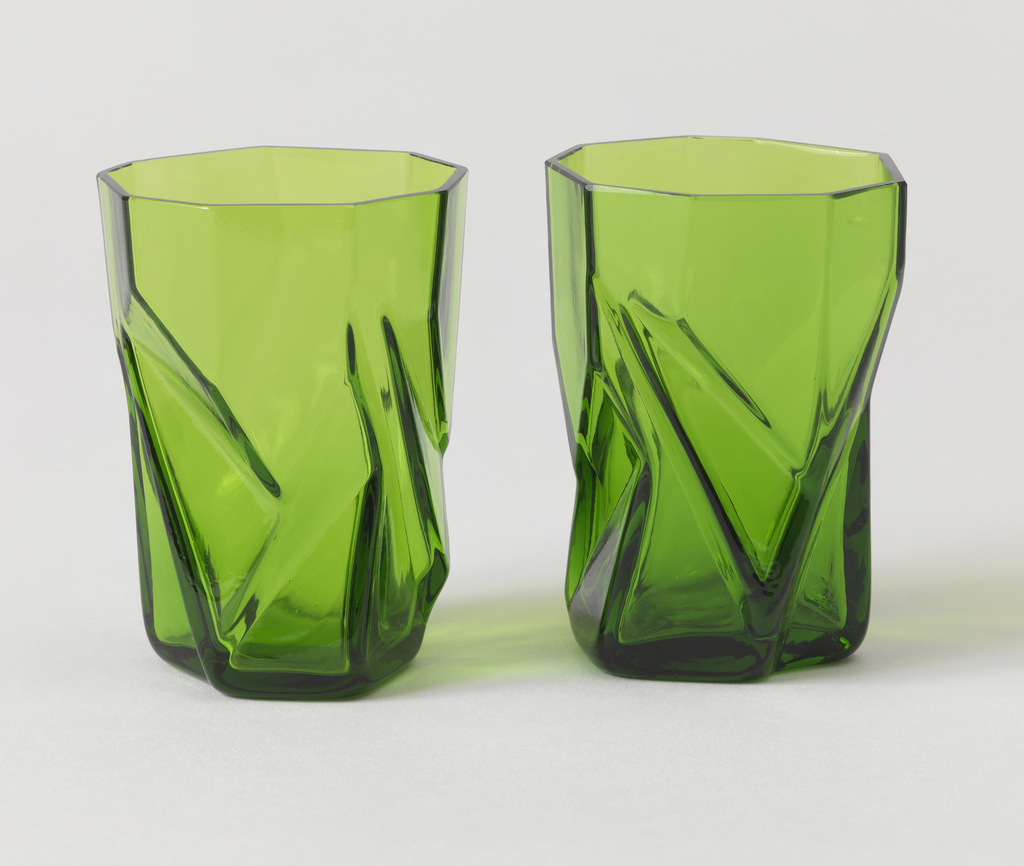 Introduced at the 1928 Pittsburgh Glass and Pottery Exhibit, designer Reuben Haley’s Ruba Rombic forms epitomize the geometric style and ideals of American Art Deco. The Art Deco style, popularized by the 1925 Exposition Internationale des Arts Décoratifs et Industriels Modernes in Paris, which likely also inspired Haley, is often characterized by jagged lines and a machine aesthetic inspired by and associated with Cubist patterns. Considered to be quintessentially Art Deco in their three-dimensional rendering of the Cubist aesthetic, these glasses perfectly capture the faceted, segmented appearance common to art and design in the late 1920s, as everything from wall coverings to advertisements featured repeating, geometric patterns. The design name is not as random as the forms seem, but indicates the aesthetic’s origins: “ruba’i” is a Persian poetry genre, while the geometric term “rhombic” refers to an irregular form with no right angles. Haley’s glasses are expressive, decorative objects, as Art Deco style put a premium on form and line, but they were machine-made, making the term “Ruba Rombic” a nod to the merging of fine craft and science in these glasses. As the glassware was molded and created with machinery, the forms were affordable for many consumers, allowing Ruba Rombic success in department stores, one of the sources for Art Deco style in the United States. Still, despite becoming one of the Consolidated Lamp and Glass Company’s most popular design lines, the fashionable Ruba Rombic was only manufactured for a short period: by Consolidated beginning in 1928, and – in limited production – by the Phoenix Glass Company from 1933 to 1936.

← Groundwork for a ceiling
Psyche’s Offering to Venus →