Necklace, Paris, France, ca 1938, emeralds, diamonds, platinum, Courtesy of a Private Collection. This necklace can be worn either way up.

As curator of Set in Style: The Jewelry of Van Cleef & Arpels, I am often asked about what specific characteristics of this firm’s jewelry led to its being the subject of this exhibition in a design museum. Jewelry design is a major part of the Museum’s collection and exhibitions focus. For over six years, as head of the Product Design and Decorative Arts department, I had thought about creating an exhibition that would capture the imagination and inform people about twentieth-century jewelry design. A strong commitment to process and innovation, fundamental to Van Cleef & Arpels’ contributions to this history, combined with an emphasis on design in high jewelry, make this 105-year-old firm a natural choice for such an exhibition. In creating the curatorial concept, I looked at design connections from exquisite watercolor drawings to innovative and technically superb jewelry. These connections formed the basis of the themes I chose to examine the jewelry from a design point of view. Six themes appear throughout the firm’s history: Innovations, both technical and stylistic; Transformations, in the sense of transformable jewelry as well as the transformation of the firm in establishing itself in the United States; Nature as Inspiration; Exoticism; Fashion; and Personalities. Over the next month and a half, I will delve more deeply at these themes. Innovation The first theme, Innovation, plays a role in all of the other themes and lies at the heart of Van Cleef & Arpels. With so many innovations, where to start? The magnificence of the Mystery Setting, when arrayed in numbers, is dazzling. VC&A perfected and patented this technique of making the setting “invisible” in 1933. The firm soon worked beyond flat fields of color, such as Mystery-Set sapphires on the tops of boxes, to shaped surfaces and overlapping flower petals, such as the extraordinary peony brooch of 1937. This process spoke to VC&A’s commitment to perfectly matching and cutting stones in the service of design, rather than concentrating on setting a single large stone. It may have started out like the micromosaic jewelry of a century earlier, which also had tiny squares that made up a scene, with invisible seams. The Mystery Setting solved the even more difficult challenge of hiding the support structure while allowing light pass through. This was achieved by cutting identical grooves into the stones to slide them into channels — only something the finest craftsmen could do. The technical prowess resulted in strong design statements of perfectly matched colored fields. Van Cleef & Arpels has also led the way with its stylistic innovations. An example is a 1919 brooch with geometric bands of color and diamonds, arranged in Art Deco style, six years before the exhibition in Paris in 1925 that later lent the style its name. Van Cleef & Arpels continued the traditions of fine gold workers from 18th- and 19th-century Paris, but VC&A’s nécessaires (to hold “necessities”) no longer stored 18th-century tweezers, dance cards, and the like, but compacts and sometimes lipstick. The earliest piece in the exhibition, a gold, enamel, and jasper model of a yacht from about 1908, actually carried out what was then a modern function: its gold smokestack is actually a bell push to call a butler. VC&A’s luxury boxes led to the Minaudière, a patented creation of 1934, which merged the nécessaire with the clutch into a luxury box that might include a cigarette lighter and box, lipstick, comb, card, jewelry box, and a hidden watch. 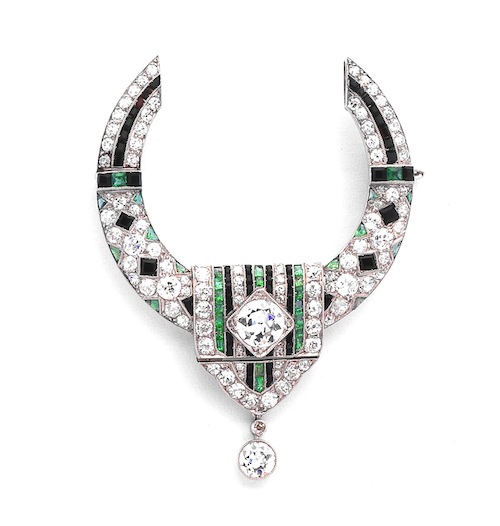 Another innovation is in how the firm made pieces of jewelry transformable. In my next post, I will examine some of VC&A’s triumphs of Transformation.