An Artist in America 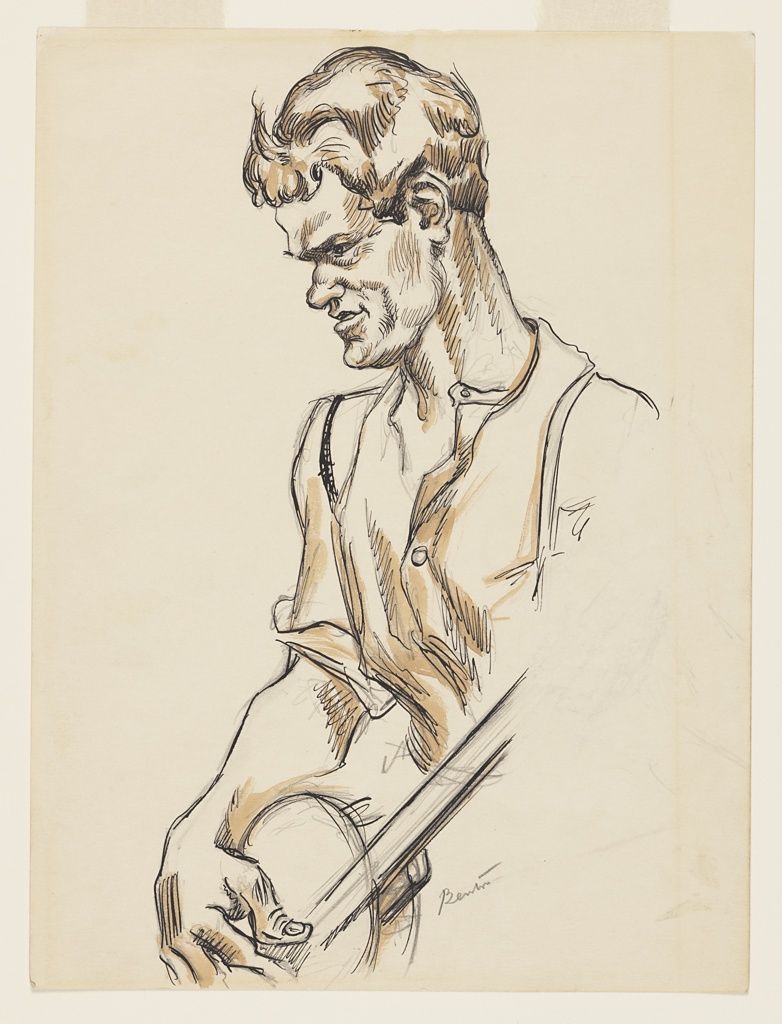 A noted teacher whose students included Jackson Pollock, Thomas Hart Benton was at the forefront of the Regionalist art movement, painting scenes of everyday life in the United States.  During the Great Depression, he traveled through the South and Midwest and published an autobiography—An Artist in America—recounting his experiences.  The book was illustrated with sketches of the places and people he encountered, including this drawing of Red, a lanky, red-headed musician that Benton met during a trip through the Smoky Mountains in December 1934.

In his autobiography, Benton describes Red as “a glorious banjo-smiting vagrant.”[1]  They met when Benton encountered a procession of “Holiness people” walking single-file along the highway.  The group—including three men, two women, and several children—had been serving as missionaries in the mountains and were walking to their home in a mill town thirty miles south.  Benton struck a bargain with their leader, Red, offering to give them a lift in his car if they would let him make some drawings.

Benton met the group again the following evening at dusk, joining them for their church service.  The congregation sang three or four roaring hymns while stamping their feet, shaking the rafters of the wooden building.  A woman preacher prayed over a sickly child.  However, her prayers were interrupted by shouting, and the service came to an abrupt conclusion.  A boy had been stabbed by his romantic rival outside of the church.

Once Benton returned to New York, he worked his drawings of the service into a painting, Lord, Heal the Child.  Red sits on a platform, playing his banjo alongside a fiddler.  Behind them, other musicians play guitar and harmonica.  The collection at Cooper Hewitt also includes Coming to Work, another sketch from Benton’s travels that was reproduced in An Artist in America.