Looking Up to Landscapes 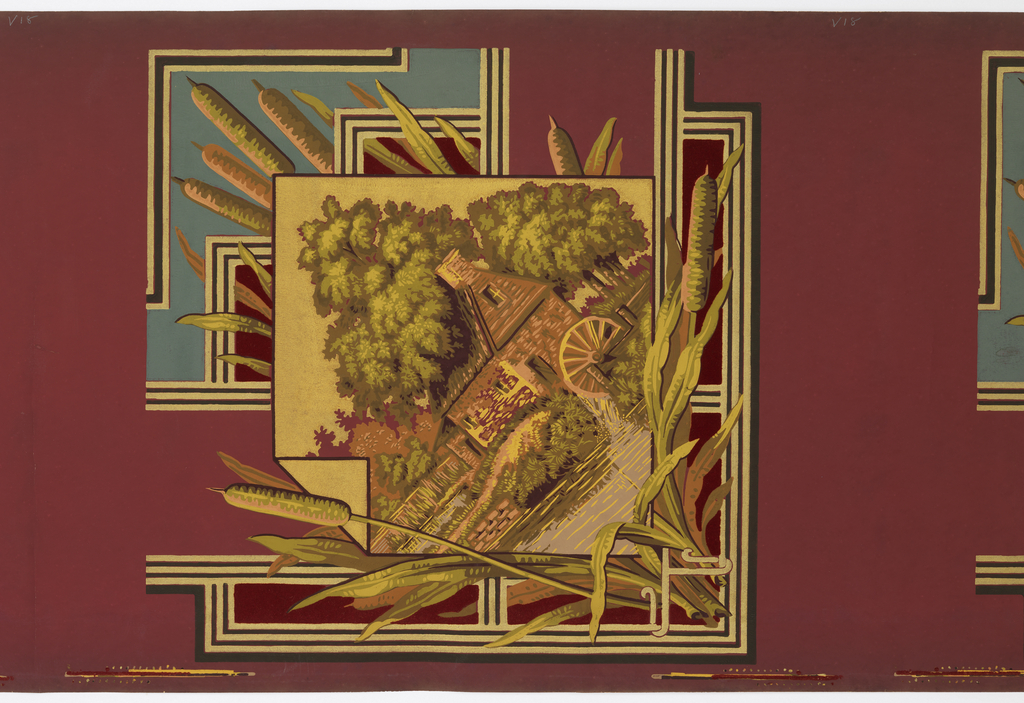 If you’ve ever thought it might be nice to be a fly on the wall, think about the fun you could have with a bird’s eye view from the ceiling. You could be part of the beautiful ceiling decoration that was so fashionable during the Gilded Age. Today’s wallpaper would have been part of that ensemble.

This landscape view containing a watermill and cattails is angled on the bias for a reason. This is the corner section of a ceiling border and sitting on a 45-degree angle makes the design more accessible from multiple viewing points. The design is woodblock-printed in about twelve colors, while the burgundy color around the cattails is flocked. Borders were frequently used to outline the perimeter of a ceiling, possibly dividing a large ceiling into smaller sections, accenting any architectural features. There would have been a separate paper filling in the interior section of this framework and another filling the exterior. You can get a sense of the ornateness of these decorations in the following illustration which contains this corner. There are surviving examples of paper-decorated ceilings dating back to the sixteenth century, and papered ceilings remained fashionable into the 1950s, but the Gilded Age was the heyday of elaborate ceilings.

This ceiling border was produced by M.H. Birge & Sons in Buffalo, New York. Prior to its closing in the 1970s, Birge had been one of the premier manufacturers in the United States, as well as the longest operating wallpaper company. They produced papers for many different price points, from the very mass-market machine-printed papers, to the more expensive block prints, to the very exclusive leather papers, which were embossed, block-printed, and hand-rubbed with an oil finish to simulate leather hangings.