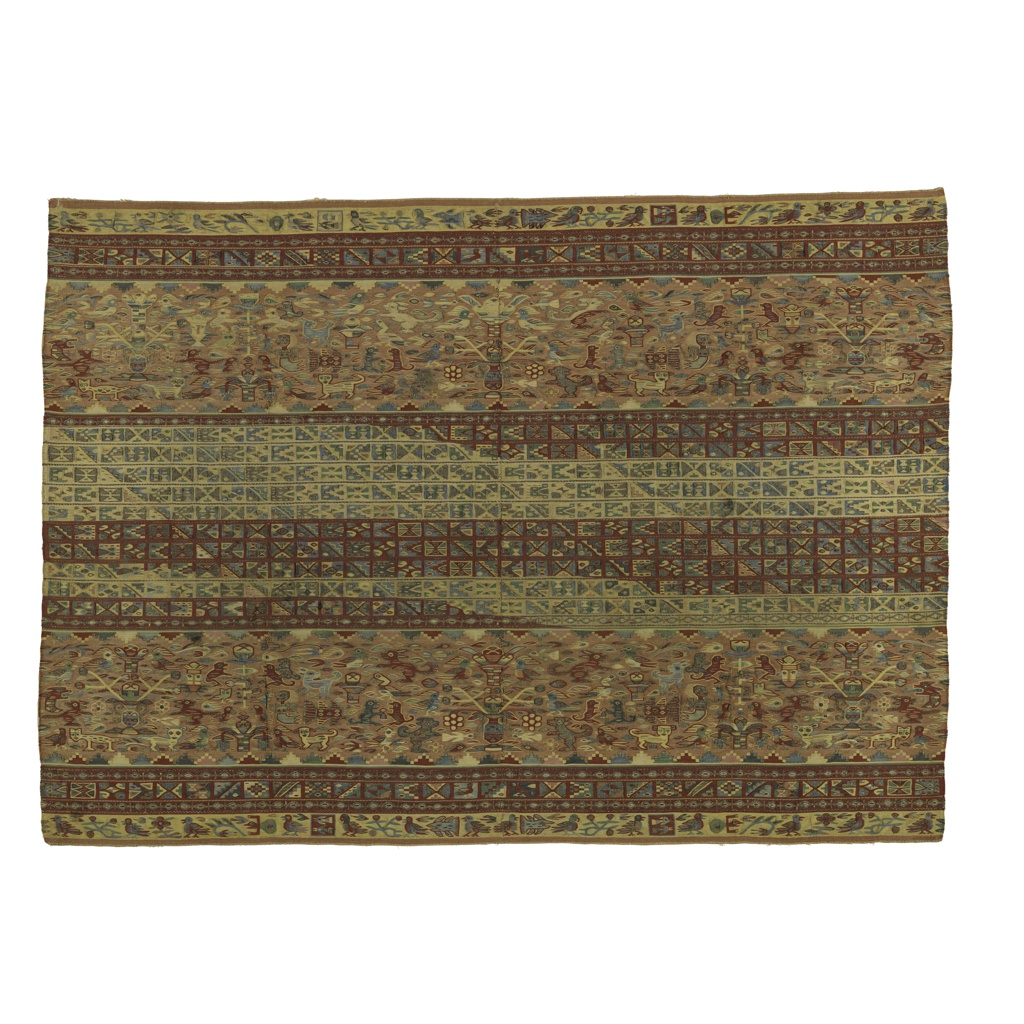 This beautiful cloth is a woman’s shoulder mantle, called a lliclla in the Quechua language of the Inca Empire, and was made during the colonial period of Peru. A perfect blend of the cross-cultural elements of the 16th- and 17th-century era of global trade, the Chinese silk and Spanish silver threads are woven with Inca techniques and design motifs.

The abstract designs of geometric squares, tocapu, are rendered in modulated colors to form a cascade that moves from left to right. Each small square is its own universe. Some scholars believe that they represent a language, though the Inca Empire had no known written language. Though we do not know today what exactly the tocapu represent, in Inca times these designs were only allowed to be used by the Inca king and those to whom he made gifts of special tocapu-embellished garments. A woman wearing such a garment was no doubt a member of one of the noble families. Even after Spanish colonization the New World, this display of Inca heritage still retained its prestige.

The lliclla is made in tapestry weave called cumbi, a type of cloth that was highly valued, woven by specialists, and used for the garments of the king. Inca weavers established an indelible tradition by weaving hundreds of yarns per inch with the finest of materials. During colonial times, former Inca-trained weavers continued to create high quality textiles for new purposes. As we can see in this mantle, the inclusion of new materials and motifs imparts new levels of meaning to traditional design and production. (Note the mermaids in the two flora- and fauna-filled panels.)

This traditional Andean garment was likely made as a wedding mantle. Its fine silk would have come to Peru via the Manila Galleons—trade ships that plied the ocean routes from Lima to the Philippines, which served as the major port for trade from China beginning in the late 16th century. Carrying a cargo of valuable American silver, the Spanish ships returned from Asia loaded with Chinese silks and porcelain. It is likely that the silver threads also came by sea—across the Atlantic from Spain to Peru. Peruvian silver was sent to Spain, where it supported the enterprise of the Spanish empire and where some was made into metal threads. These threads were exported back to Peru for use in the weaving and creation of garments. The Peruvians did not have existing techniques for producing silver thread and eagerly adapted this European taste into their weaving. The combination of the Spanish silver with the Chinese silk created objects of hybrid beauty, such as this lliclla, which retains the traditions of the Inca past while transforming the aesthetic of luxury in an increasingly complex society.

Dr. Elena Phipps (PhD Columbia University, 1989) is an independent scholar and curator. She worked at the Metropolitan Museum of art for over 34 year as Senior Museum Conservator (1977-2010) and as the co-curator and author of the exhibition and catalogue The Colonial Andes: Tapestries and Silverwork 1430-1830.

← An Illusion of the Hunt
Brandt in Bloom →