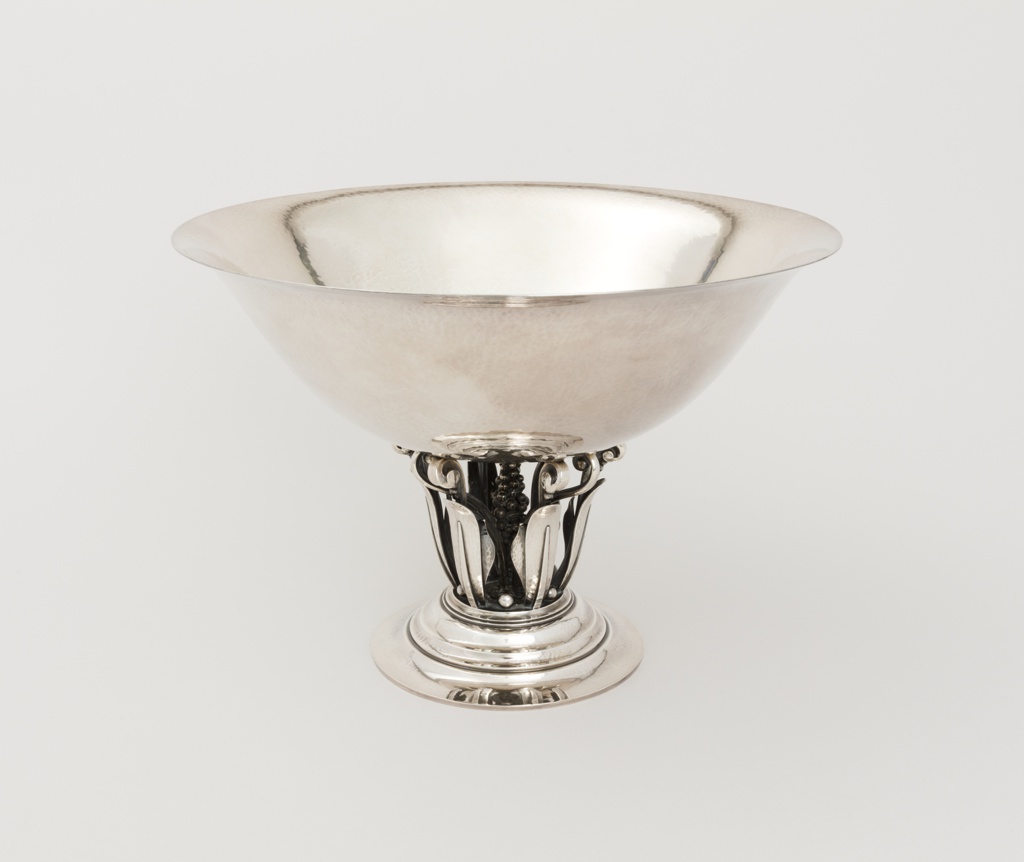 It is always surprising to read about famous designers or manufacturers who were hesitant about the career paths that turned them into household names. Danish silversmith Georg Jensen (1866-1935) was one such person. Initially, he had hopes of becoming a sculptor, but focused on silversmithing as this proved to be a more lucrative line of work. After apprenticing with several silversmiths including Mogens Ballin (1871-1914), he opened his own workshop and retail store in the Danish capital of Copenhagen in 1904. Throughout his working life, Jensen produced numerous noteworthy designs – many of which are still in production today – and the firm enjoyed tremendous success during his lifetime and beyond.

A facsimile of an American illustrated catalog showing Georg Jensen hollowware (vessel forms such as teapots, cups, and vases) that was sold in the 1940s and 1950s lists the designer of this bowl as Johan Rohde.[i] The catalog was published around 1944 and was available in the Georg Jensen Inc. store at 667 Fifth Avenue in New York City. The catalog entry for this silver piece states only the most basic of details: that it is a bowl, that it has a round shape, and that it could be yours for $250 (including 10% Federal Tax). The initials ‘JR’ are marked in the column ‘Designer’, which reaffirms that this piece was designed by Johan Rohde, one of Georg Jensen’s earliest associates. Rohde’s design dates to 1916, and was still popular in about 1955, when this example was manufactured.

Artist Johan Rohde and Georg Jensen started collaborating in 1904, when Rohde commissioned Jensen to make silverware for his personal use. According to corporate history, both Rohde and Jensen enjoyed working on this project together, and Jensen admired Rohde’s natural flair for design. In 1906, Rohde started working for the Georg Jensen silver smithy. His designs differed from Jensen’s in that they were much more stylized – a mix between art deco and art nouveau, whereas Jensen’s leaned much more towards the art nouveau aesthetic.[ii]

Hollowware is considered by many to be ‘the zenith of the silversmith’s artform’. In general, making hollowware requires a considerable amount of labor and material and takes great skill.[iii] Although the hollowware that Johan Rohde designed is frequently mistaken for Georg Jensen’s oeuvre, Rohde’s work stands out for its carefully considered details. The circular stepped and domed foot of this piece, the grape clusters and curled fronds that grace the central support, and the concave shape of the bowl executed in raised silver all evoke the superior craftsmanship of a master silversmith.

Design collaborations form a core part of the Georg Jensen ethos. Other notable designers that the firm has worked with over the years include Henning Koppel, whose ‘978’ and ‘Pregnant Duck’ silver pitchers are among his most well-known designs. Arne Jacobsen, whose name evokes furniture rather than silverware, created a line of futuristic-looking stainless steel cutlery that was introduced in 1957.[iv]