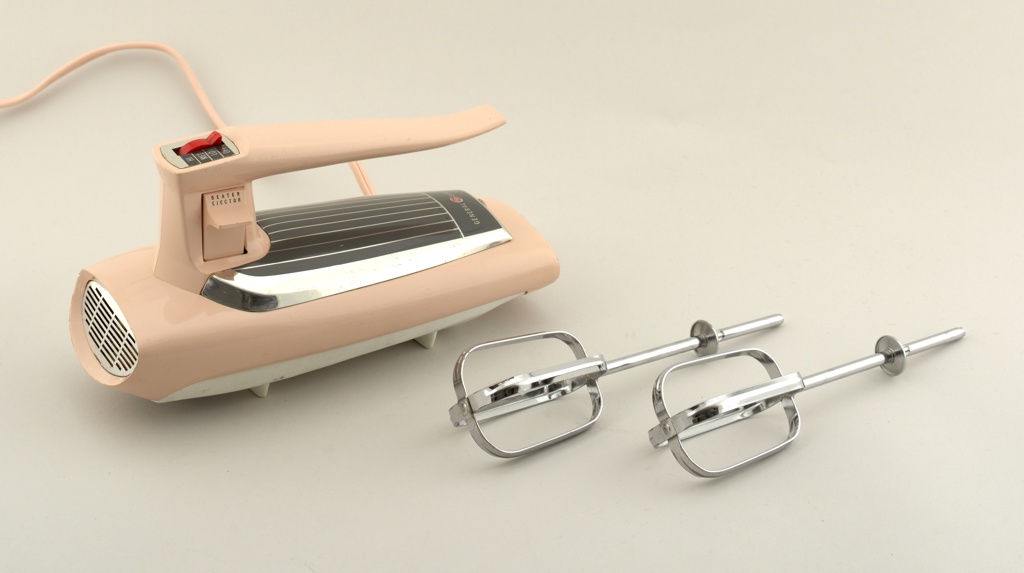 In 1955 General Electric released a line of kitchen appliances available in what they called “mix-and-match colors.” From canary yellow dishwashers to cadet blue refrigerators, one could construct an entire kitchen with G.E.’s colorful products. A two-page spread in Better Homes and Gardens from 1956 explained how one could entirely modernize his or her kitchen with the purchase of just one mix-and-match item. This marketing ploy gave consumers, unmistakably women at the time, choices. The advertisement suggests that this purchase would set the tone for the entire kitchen. A homeowner could then further transform the visual profile of his or her kitchen by purchasing G.E.’s other “mix-and-match” products as well as an accompanying line of paints, linoleums, and patterned fabrics that implemented the same pastel color scheme.

This emphasis on a cohesive look, composed entirely of G.E.’s products, extended all the way into the realm of small hand-held devices for the kitchen, such as this “petal-pink” portable mixer, released in the late 1950s. The mixer also came in white, yellow, or turquoise. Its sleek, almost spaceship-like housing reflects a larger domestic design trend towards space-age aesthetics, largely spurred by the 1957 launch of the Sputnik satellite. Besides aesthetic choices, this mixer also allowed for functional choices. It came with a drink mixer attachment and the option to add a knife sharpener accessory to the back of the mixer.

In its advertising, G.E. also highlighted the mixer’s practical elements such as its mere 2 ¾ pound weight, its detachable cord, and its three mixing speeds. Above all, though, the aesthetic presentation of this product was of prime importance in the mixer’s marketing, for a 1962 ad in Ladies’ Home Journal read, “Have you ever seen a prettier looking Portable Mixer? Kitchen-proud homemakers like that!”

I have a yellow one of these given to me in the early ’70s. Still in use!

Charming and very interesting – thanks so much!

Does GE still make food mixers? I have had one for many years. It has two mixing bowls difference sizes. So useful when making large or small amounts. Unfortunately it has broken. I would love ve to replace with similar model
Brigid

I have my late mother’s one in pink, and am still using it! I believe it is a 1960s model.