From Target to Tamarind 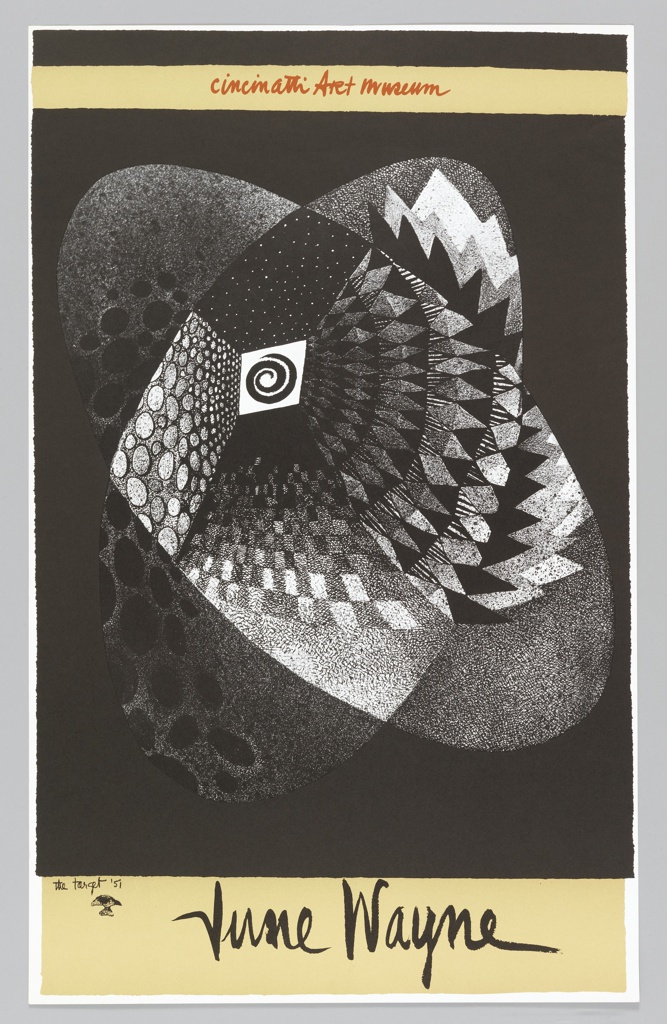 In September of 1969, the Cincinnati Art Museum hosted a retrospective exhibition dedicated to the work of June Wayne (1918-2011). Although Wayne’s prolific design practice spanned multiple media, today she is especially celebrated for her work as a lithographer. The retrospective’s exhibition poster—seen here—features a print entitled The Target, which Wayne created in February 1951, during her first forays into lithography. [1]

During the Great Depression, Wayne dropped out of school and went to work at a Chicago factory to support her family. She found opportunities to paint in her spare time, though the activity was primarily for her own enjoyment rather than to explore a possible profession. In the late 1930s, she was hired by the WPA Federal Art Project (FAP), in a division focused on easel painting. [2] At the FAP, Wayne began a lifelong career of activism in support of the arts by banding together with fellow artists to form an Artists’ Union; later, as a key representative of the Union, Wayne was instrumental in successfully lobbying Congress for greater job security for FAP artists. Speaking about her experience, Wayne has suggested that in providing opportunities and funding for artists to practice their craft, the WPA Federal Art Project inadvertently fostered the development of a cohesive profession and identity for artists in the US. [3]

After her time with the FAP, while her husband was serving overseas during World War II, Wayne moved to California. She began taking classes at Cal Tech University, learning to read and produce technical engineering drawings and blueprints. A combination of this training, her dissatisfaction with the materials and production of painting, a new comfort with self-identifying as an artist, and a lifelong fascination with optics led Wayne to explore printmaking. [4] Wayne’s first experiments with lithography were serendipitous: her neighbor, Lynton Kistler, owned and operated a lithography studio. By the mid-1950s, Wayne had turned almost exclusively to lithography, which she used to explore abstract representations of light, space, and perspective.

In 1960, Wayne established the Tamarind Lithography Workshop in Los Angeles. Dedicated to cultivating printmaking in America, and sustained by funds from the Ford Foundation, Tamarind offered paid fellowships to artists interested in lithography. Artists such as Ruth Asawa, Anni Albers, Gego, and Louise Nevelson came to study what was then considered a dying medium in America. [5] Wayne resigned as Director in 1970, when Tamarind was reestablished in Albuquerque as part of the University of New Mexico, but continued to work with lithography and to find ways to champion fellow artists. The legacy of her work includes influential experimentations in symbolism, surrealism, abstract figuration, and visual manifestations of feminist political theory, as well as a legacy of extraordinary advocacy for printmaking in the United States.

[2] In an oral history conducted for the Archives of American Art, Smithsonian Institution in 1965, Wayne claims she cannot recall how she was admitted into the program. However, she had exhibited her paintings in a solo exhibition at the Palacio de Bellas Artes in Mexico City in 1936.

[3] She goes on to say that this government initiative, “gave a sense of identity, however fragmentary, to artists who till that time really could not find a slot for themselves within society.” See note 2, above.

[4] Though Wayne spent enormous periods of time painting earlier in her life, she would later came to believe that “oil on canvas is a basically idiotic combination.” See note 2, above.