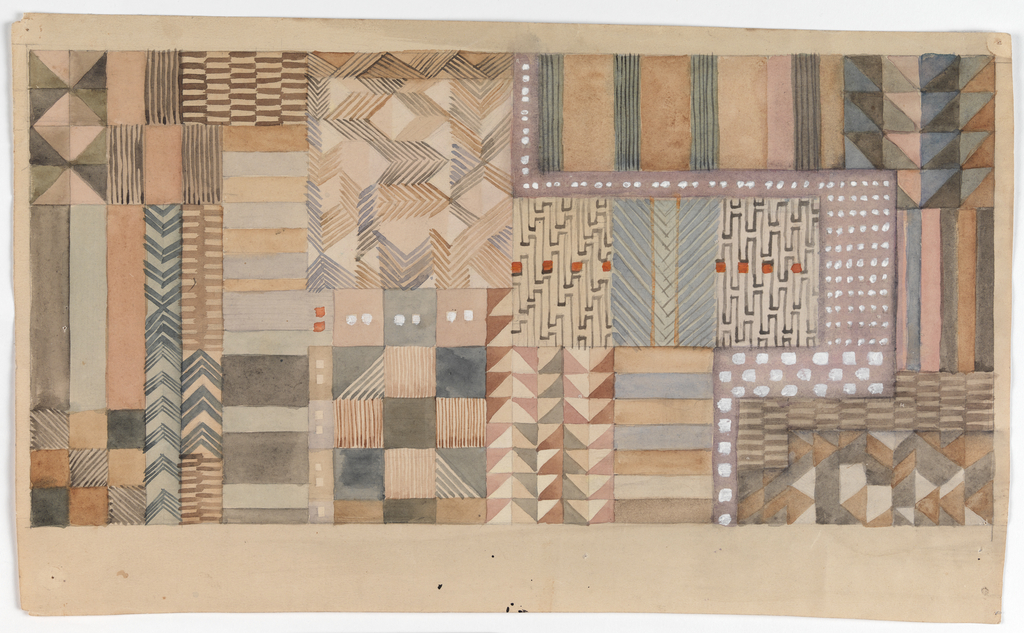 Adelgunde “Gunta” Stölzl was one of the most successful women designers connected with the Bauhaus, the school founded in 1919 by the German architect Walter Gropius. The mission of the Bauhaus was to integrate art, design, and craft through a curriculum that involved training in specialized workshops. After encountering the school’s manifesto while studying at the Kunstgewerbeschule (School of Applied Arts) in Munich, Stölzl applied with a portfolio containing work she had produced both as a student and as a Red Cross nurse during World War I. She was immediately accepted into the Bauhaus with a scholarship and went on to play a crucial role in the development of the school’s weaving workshop. She became junior master in 1927 and full master the following year, making Stölzl the only woman at the Bauhaus to achieve the prestigious title. Her textiles were known for their abstract, asymmetrical compositions, complex patterns, innovative use of color, and experimentation with unconventional materials such as cellophane.

In 1926, the Bauhaus relocated from the German city of Weimar to Dessau, where Stölzl worked as the weaving studio’s technical director alongside the form master, Georg Muche. When Muche brought in Jacquard looms to increase production, he caused a student uprising and upset Stölzl, who favored instead the use of handlooms. She believed handlooms enabled one to fully understand the weaving process and provided students with room to play and experiment with the medium.[1] Nevertheless, she dedicated herself to learning how to use the new, more technologically advanced Jacquard looms. The Jacquard technique involved the selective raising and lowering of the warp using punch cards encoded with the desired design, and soon, Stölzl realized that it allowed her to produce patterns with precision and complexity. Additionally, after observing that multiple versions of the same design could be produced quickly with the new looms, Stölzl saw an opportunity to “influence the public at large in every sphere.”[2]

Stölzl’s sketches for Jacquard woven textiles include this design, which incorporates a variety of geometric patterns containing rectangles, squares, triangles, and chevrons. The design is rendered in a muted palette of sandy pink, beige, taupe, grey, and brown watercolors, with isolated dots and small squares in white gouache and red wash. The calm, subdued colors compete with a sense of forward movement and momentum created by the repeated arrow-like forms within the composition. Stölzl’s design demands the continual reorientation of the viewer, as the eye moves horizontally and vertically from one intriguing geometric pattern to the next. Still, the replication of interrelated shapes is reassuring, creating a sense of familiarity that resonates with the Jacquard technique, a process marked by its ability to produce unlimited reproductions.

← Travel and Eat in Style
May Morris: Designer and Activist →