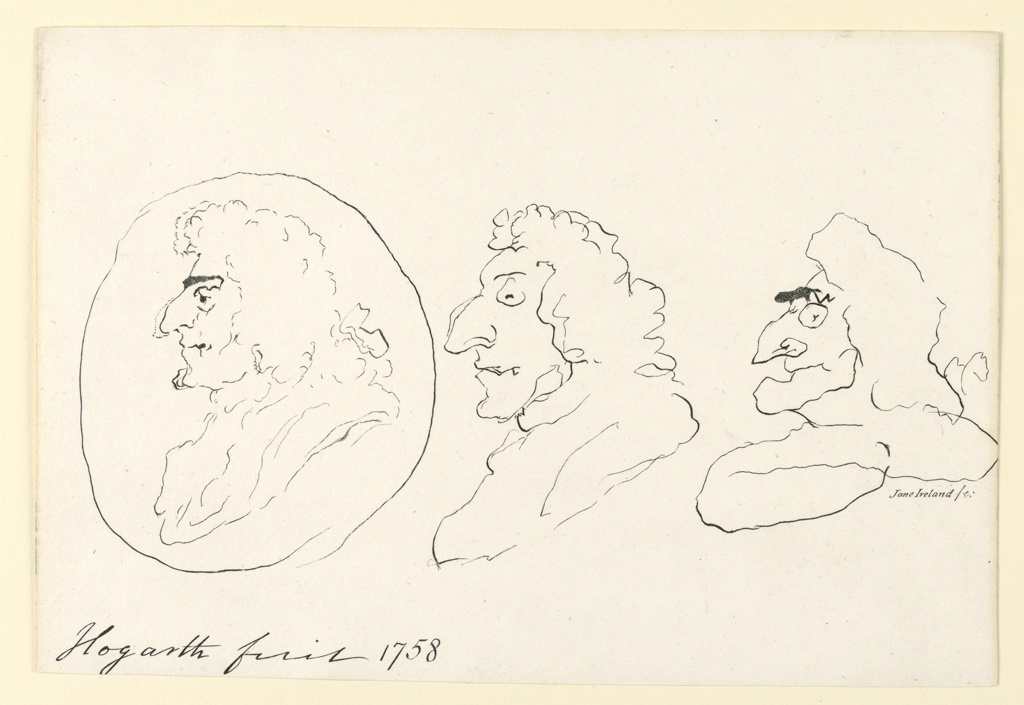 Jane Ireland and her sister Anna Maria were artists and print-makers in 18th-century London. Like many early women artists in Europe—to whom formal training was rarely available—the Ireland sisters learned their craft from their father. Samuel Ireland was a writer, print dealer, engraver, and designer who exhibited at the Royal Academy in the 1780s. In the 1790s, with the help of his daughters, he published a treatise examining the work of the famous London artist William Hogarth (1697-1764). Called Graphic Illustrations Of Hogarth, From Pictures, Drawings, And Scarce Prints In The Possession Of Samuel Ireland, Author Of This Work […], the book includes dozens of print reproductions of Hogarth’s works made by Samuel, Jane, and Anna Maria.[1]

Hogarth was an enormously varied artist, and Jane Ireland’s prints are carefully calculated to reflect the diversity of his style. In this etching, Jane reproduces a caricature drawing and convincingly preserves the loose, scratchy quality of Hogarth’s pen. In the volume, Samuel Ireland explains how the sketch came into being. He quotes a letter by a certain James Townley, who records that “Hogarth and my father were one day (in the year 1758) in the kitchen of my father’s house…and my father asked Hogarth what he meant by character and caricatura, when he took an old dirty pen out of the kitchen ink-bottle, and said, ‘I’ll shew you, master Townley;’ and then made this little sketch, which my father gave me some years afterwards; and I wrote ‘Hogarth fecit, 1758,’ at the bottom of it, and have now put it into a frame.”[2]

Meanwhile, in two very different prints, (1949-152-81; 1949-152-82) Jane successfully recreates the much denser composition of Hogarth’s unpublished engraved illustrations for Milton’s Paradise Lost. (Compare with one of Hogarth’s originals in the British Museum.)

Although Jane Ireland is hardly a household name, the family remains notorious owing to a terrific scandal created by her brother. William Henry Ireland famously forged a series of supposed Shakespeare works and documents which were published by Samuel Ireland in the 1790s. These included a play, “Vortigern and Rowena,” which—unsurprisingly—was terribly received when staged in April of 1796 as a newly-discovered Shakespeare original.[3] The truth of the hoax was soon discovered, and in a satirical print by John Nixon, the whole Ireland family is implicated in the forgery. Jane, seated at right in a red dress, can be seen at work making an etching.

[2]  Graphic Illustrations, vol. I, 167-8. The original drawing is now in a British private collection.

[3] For more on the scandal, see Doug Stewart, The Boy Who Would Be Shakespeare: A Tale of Forgery and Folly (Cambridge, MA: De Capo Press, 2010).

← Nuts and Bolts
New Designs for the Atomic Age →