No Butts About It 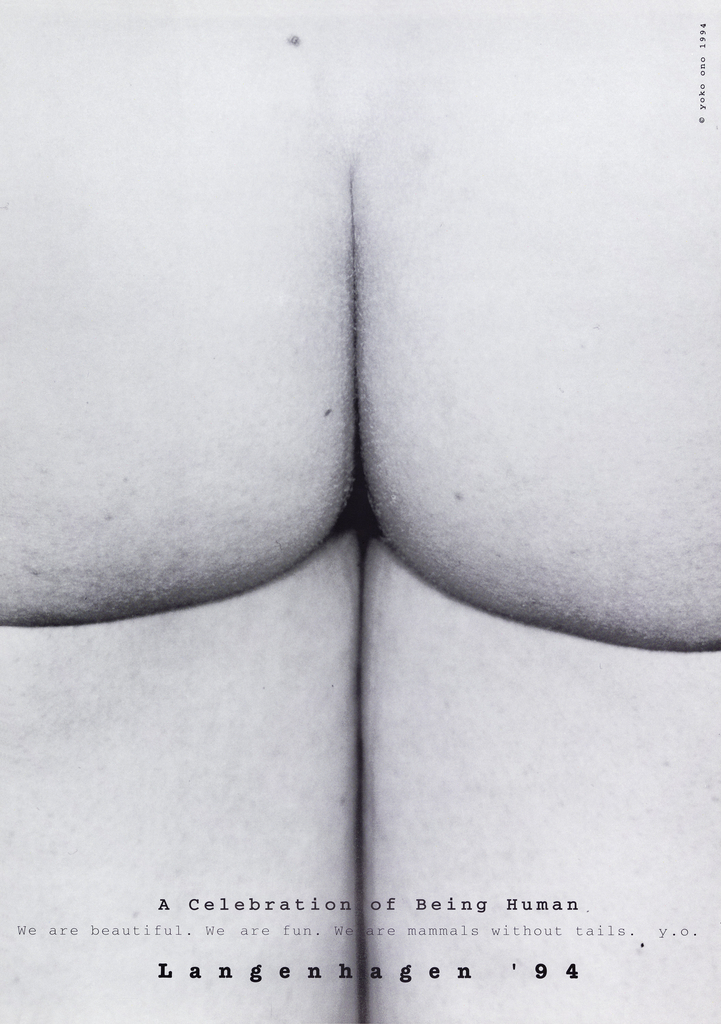 Posted by Kristina Parsons on February 5, 2019

The direction for Film No. 4, an early work by Yoko Ono, began with simple instructions: “String bottoms together in place of signatures for petition for peace.” The 80-minute film, created in 1966-67, showcases a series of bare bottoms in the midst of walking. The images are accompanied by a soundtrack composed of interviews with the people whose behinds are featured, and others who are considering participating. [1] In the film, each bottom is anonymous, thereby obscuring the display of hierarchies and differences—everyone is represented by the same universally shared human feature.

Nearly 30 years later, Ono adapted the concept of Film No. 4 into a new project, called A Celebration of Being Human. In 1994, the city of Langenhagen commissioned Ono to produce a large-scale work that would celebrate its newest initiative: vor ort- Kunst in städtischen Situationen (On the Scene: Art in City Situations). In Ono’s city-wide installation of A Celebration of Being Human, a frame from Film No. 4 was enlarged and replicated on billboards, posters, postcards, public transportation, and even umbrellas throughout the German city. The image features a quotation from the soundtrack of Film No. 4, “We are beautiful. We are fun. We are mammals without tails.” [2] Through its scale and serial repetition of a zoomed-in derrière, A Celebration of Being Human is a monumental and egalitarian recognition of the things we have in common. The goal—as with Film No. 4—was to inspire peace: as Ono explained, “Faces can lie, backsides don’t. So long as they continue talking about butts, they will not be killing each other.” [3]

An article concerning the recent screening of Film No. 4 at the Royal Albert Hall in London provides further context for the film, as does  a transcript of Yoko Ono speaking about the film for the Museum of Modern Art.

← Asparagus to Go
Wallpaper, It’s Good for Your Health! →